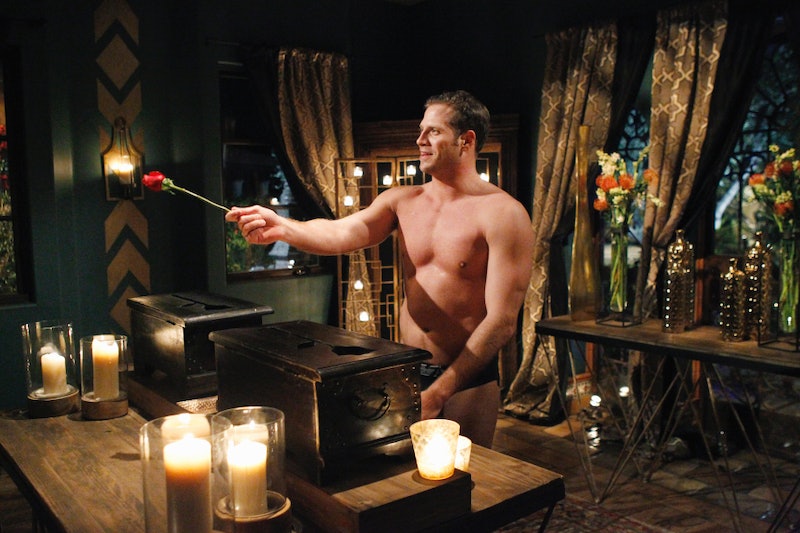 It's totally understandable that, while watching The Bachelorette premiere, the contestants all began to run together. There are just so many of them, and it's impossible to keep them all straight this early in the game. But if you caught the premiere on Monday night, there's one guy you absolutely remember: Ryan M., the drunk Bachelorette contestant who started boozing it up as soon as he rolled up in his limo and didn't stop 'til... well, ever. As the night wore on, he got progressively drunker and progressively became more of a douchebag. It didn't take much — just an attempt at touching Kaitlyn's butt and trying to start a fight or two — before Chris Harrison kicked Ryan out of the bachelor mansion, and now, the situation just got even more horrifying. According to what a source confirms to Us Weekly, Ryan M. used to date Nikki Ferrell. Like, former Bachelor winner Nikki Ferrell. Like, Juan Pablo Galavis' ex.

Apparently Nikki and Ryan, who are both from Kansas City, used to be an item. Obviously, their relationship didn't work out (I can't imagine why), which is why Ryan found himself on The Bachelorette for all of ten minutes. As much as I feel terrible for any woman who's ever had to endure a date with Ryan, I especially pity Nikki. Not only has she dated Juan Pablo, but she's dated drunk Ryan? Can this girl catch a break?

Clearly, there's only one thing left to do: Determine who her worst ex-boyfriend was. It's a close race, y'all. A close race.

During his short-lived Bachelorette career, Ryan would basically threaten any guy who came anywhere close to him, especially if said dude was trying to keep him away from Britt and Kaitlyn, who were both seriously disinterested. Considering how drunk he was, I doubt any fight he would've started could have lasted long.

JP might not be slugging guys, but it's probably less due to his maturity and more about the fact that he just doesn't care about anything. During their relationship, Juan didn't tell Nikki he loved her once (as far as the public knows, anyway), and refused to propose during the season finale. Which is all well and good, if he hadn't also told Clare Crawley that he "loved f—king" her just minutes before that happened.

It's 2015, and I still hear "Ees OK" echoing through my nightmares.

Between threatening to leave because the Bachelor mansion wasn't bumpin' enough for him and the time he spent drunkenly splashing around the pool, yelling that he was "all horned up", all I kept thinking was, "Who is this guy?"

Juan Pablo made headlines last year when he announced that there shouldn't be a gay bachelor because it would set a bad example for kids. In case you've forgotten, and I can't see how you would have, he said in an interview with The TV Page:

Obviously people have their husband and wife and kids and that is how we are brought up. Now there is fathers having kids and all that, and it is hard for me to understand that too in the sense of a household having peoples… Two parents sleeping in the same bed and the kid going into bed… It is confusing in a sense.

As soon as fellow contestant J.J. tried to get him to calm down, Ryan M. yelled, "Why am I not raping you right now?" Ryan, please stop talking.

The Verdict: Ryan and Juan Pablo are equally the worst, and I wish there was something I could do for Nikki Ferrell now that she's survived relationships with both of them. Here's an idea for a new reality show: Lock these two on an island and let them solve this Hunger Games style. That's legal, right?