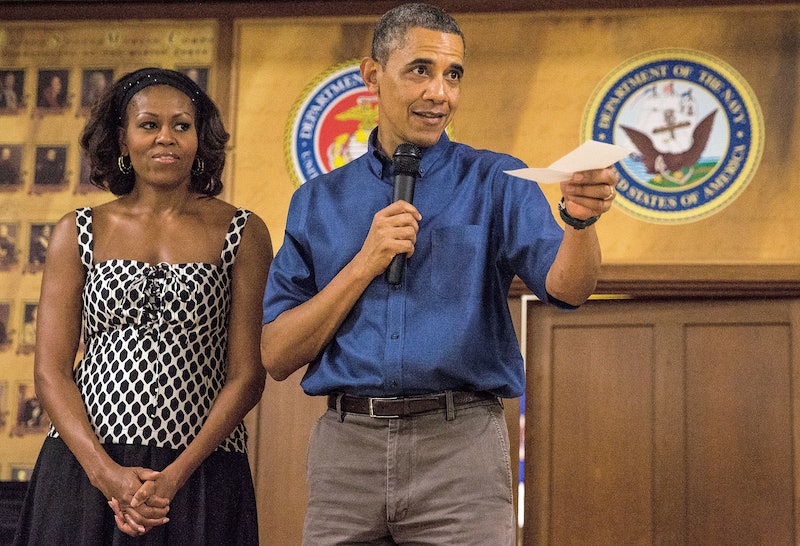 For anyone who has already seen Pitch Perfect 2, you might be still be reeling from the effects of cameo whiplash, since so many celebrities, famous journalists, and awesome a capella groups showed up for the film — offering their own personal charm to the sequel. While the joke that Associate Justice of the Supreme Court Sonia Sotomayor sent the Barden Bellas a piece of hate mail with the word "B****es" in it might be one of the best things I've ever seen onscreen, the moment when the Barden Bellas' Fat Amy accidentally exposed her back and front junk to President Obama and First Lady Michelle Obama is easily the most memorable moment of the film. In fact you may be asking yourself, what the heck? Did the Obamas really appear in Pitch Perfect 2?

Sorry guys, they didn't film anything specifically for the movie. The scene where the camera cuts to the Obamas watching the Barden Bellas' performance at the Kennedy Center for POTUS' birthday was actually just archival footage that might actually be from the annual Kennedy Center Honors which the Obamas attend every year.

Yes I know, it's a disappointment. After all, that pivotal scene is the catalyst that begins the Bellas' problems, and it would have been about a hundred times better if the Obamas were really there. Sadly, it's highly unlike Obama took a break from running the country and appearing on talk shows to be in a movie — even one as great as Pitch Perfect 2.

So, if you really want to see the Obamas appear in your favorite show or film, check out FLOTUS' scenes with Leslie Knope in Parks and Recreation or President Obama being interviewed by Zach Galifinakis on Between Two Ferns.