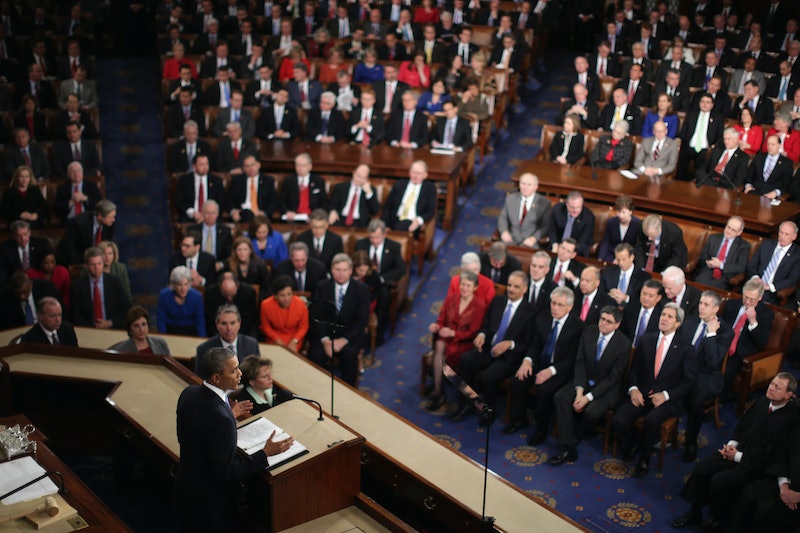 In his Mother's Day Last Week Tonight episode, John Oliver pointed out that the U.S. is one of two countries that still doesn't give mothers paid time off after having a baby. It's us and Papua New Guinea, according to a PBS report. The only real policy that helps new moms is 12 weeks of unpaid leave, which you can get only if you meet a laundry list of requirements imposed by the federal government. If this really grinds your gears, because, you know, moms are the reason why all of us are alive, and they deserve time to recover from pushing you out of their hoo-ha, then you can push almost as hard as your mom did by pushing Congress to change policies on maternity leave.

This kind of change requires us to be good Americans, though. We have to pressure local government officials and talk to our silly Facebook friends who spout misinformation about how paid maternity leave is bad for businesses. Paid maternity leave would mean putting our money where our mouths are. Instead of just recognizing how important moms are once a year, paid maternity leave would recognize the sacrifices moms make when they carry and raise children. For example, Susan Wojcicki, CEO of YouTube, owned by Google, wrote a column in The Wall Street Journal about how paid maternity leave actually helped the company. (And if we're going to take notes from anyone, it should probably be Google.) She said that when Google increased paid leave to 18 weeks, the rate at which new mothers left the company fell by 50 percent.

This is just one of the many reasons paid leave is wonderful. So, jump on the mother-loving, paid leave train, and try out a few of these six ways that you can pressure the government to enact paid maternity leave.

Employees of federal agencies (this includes Congress) are allowed six weeks of paid parental leave because of a memorandum signed by President Barack Obama in January. Unfortunately, though, a federal bill that would have extended paid leave into the private sector hasn't yet made it past the House of Representatives, according to Government Executive.

You can write your senator or House representative about this weird inconsistency. If their family deserves access to paid leave, then why doesn't yours? Especially when research has shown that paid leave can be good for business. OpenCongress can help you find your senators and House representatives. Once you've found them, you can search for their personal website, which often includes a personal email address. Then, you can use a template that will help you draft a letter to them. Here's a sample letter.

Thanks to the Internet, starting a petition is as easy as online shopping. You can use Change.org, which does most of the work for you, or ThePetitionSite.com, the same site used by People for the Ethical Treatment of Animals, the queen/king of petitions. Petitions are awesome because they show elected officials that this isn't an issue that only you and your five cats care about. There are a number of petitions already out there for paid maternity leave, so you can also sign your name to one of those. But starting a targeted petition in your local area and then sending it to your senator or House representative (see above) might help draw their attention faster.

Form A Protest In Your Area

Another way to draw attention to an issue that a lot of people support is by organizing a protest — small or large. Get on Facebook and talk to your friends who also support paid family leave. Better yet, create a Facebook event and invite everyone you know who loves their mother. Better yet, if you're part of a university or group that has a Facebook page, post information about your protest on that page to garner more support.

Host a fun craft night at your house where supporters can make signs or T-shirts with slogans about why others should support the cause. Then, go to your local courthouse, a post office, or any other public property with the group and start your rally. You can come up with chants, you can engage with the public — regardless of how you do it, people will come out more informed about the cause. Most importantly, any kind of protest with more than a dozen people will usually garner media attention, which will only help the issue of paid leave become even more visible.

Create A Viral Video Or Piece Of Art

One of the great things about living in the digital age is that we have the luxury of using the Internet to our advantage when we want to be heard. If you have any video editing experience, or you like to paint, or you can write lyrics that would make Bob Dylan cry, then create a video or an art project or a rap or a song and publish it online. Street harassment is becoming a more important, visible issue because of artists like Tatyana Fazlalizadeh, who tackled the issue with her street art project Stop Telling Women To Smile. Then, she put the project online and media outlets like The Atlantic covered her work. Her work is personal and poignant, and she's probably changed a lot of people's minds about the effects of street harassment — a pivotal goal in any movement.

Get informed about the kind of leave that your company offers. It might be difficult to politely ask questions about their policies, so please be careful if you try to discuss it with someone. If anything, see if your company offers you any options to talk about balancing family life and work with the human resources department. But being informed about your company's policy and the motivations behind it will be a good start, because you can be knowledgeable about it should you contact one of your state representatives.

The most compelling arguments for certain legislative changes are often personal ones. The movement to change the way universities are handling sexual assault began when college students around the country started sharing their stories. In April, a 24-year-old victim of human trafficking shared her story with NPR, which inspired New Hampshire Sen. Jeanne Shaheen to introduce legislation that keeps existing trafficking laws from punishing victims instead of their traffickers. You could share your story on Facebook or you could write about it on a personal blog. If you have a story that highlights the plight of mothers who can't afford to take time off after having a baby, then you should get it out there. You would help draw attention to the hundreds of thousands of women who want to have it all — a family they can love and care for, but also a career that empowers and celebrates their skills.