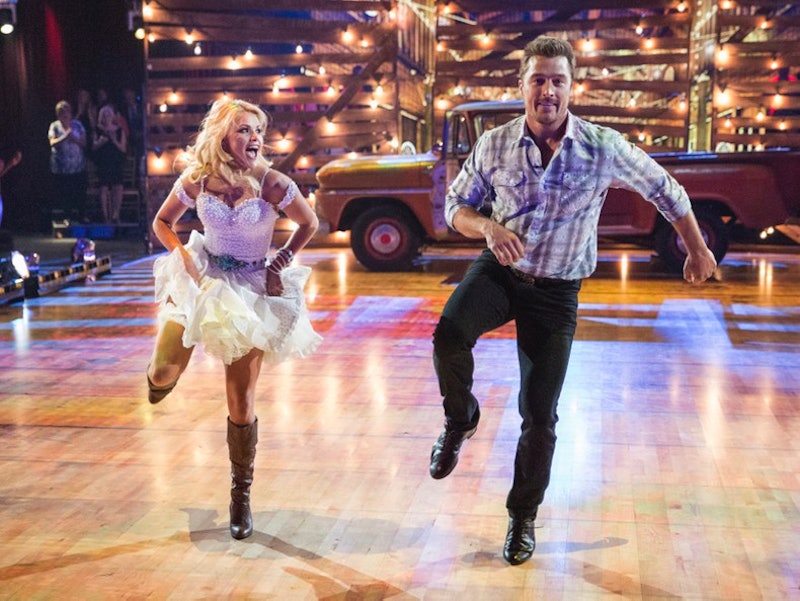 One of the coolest parts of the Dancing With The Stars finale is seeing eliminated contestants come back and perform some of their early numbers — only this time around, they're a lot better. On Tuesday's DWTS finale Chris Soules re-did his week one "Footloose" number, and it just proved how far he's come. When he originally performed the country-style dance, he scored a pretty low 26 out of 40. But when he came back on Tuesday and gave the number another shot, it was clear to everyone watching that he's got actual dancing skills now.

He may not have survived to the end, but Chris Soules proved his doubters wrong and learned a lot during his eight weeks in the competition. When the former Bachelor joined the show, I was seriously skeptical. He did take awhile to improve, but around week six he really hit his stride and only got better from there. He wasn't the Mirrorball winner, but I'd probably call the Bachelor, "Most Improved."

And, in the wise words of Bruno Mars, don't believe me? Just watch. Check out Chris Soules and Witney Carson's re-do of their week one dance below. It's an amazing second go at the fun jive, and it's proof that with practice, practice, practice, even a corn farmer with a dolphin-laugh can be a great dancer.