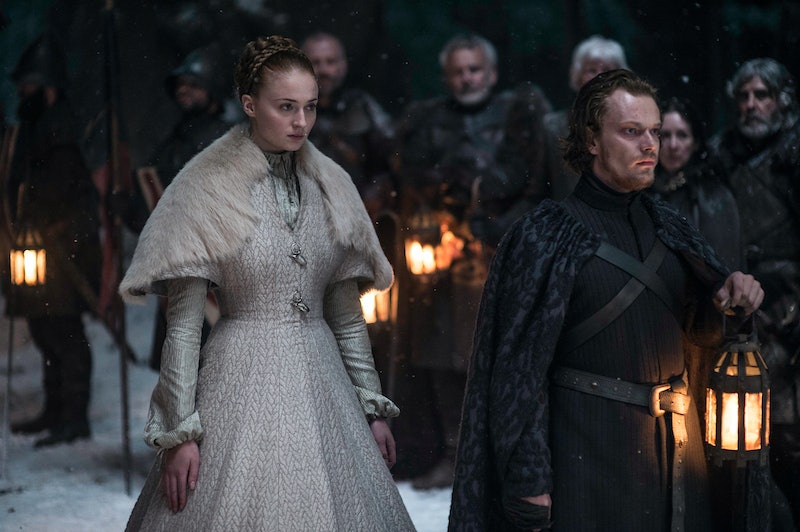 Jaime Lannister's in Dorne, Barristan Selmy's dead, and Jorah Mormont has greyscale. But if there's one moment that solidifies Season 5 as "the year of changes" for HBO's Game Of Thrones , it was last week's wedding between Sansa Stark and Ramsay Bolton. The decision of show runners David Benioff & D.B. Weiss to swap out an insignificant character (Jeyne Poole, posing as Arya) for the eldest surviving Stark child has kept viewers on their toes all season long, wondering exactly where this change would lead. Not only did this alteration of George R.R. Martin's source material result in one of the most upsetting scenes in the show's history, but there's also the question of at what point these revisions will reach critical mass, snowballing out of control and completely changing Martin's endgame. Will Game of Thrones and the Song Of Ice And Fire books end differently?

It's a fair question, given that we still have at least two books left in Martin's saga — The Winds Of Winter and A Dream Of Spring — neither of which even have publication dates set as of this writing. Of course, given that ASOIAF was originally conceived as a trilogy, then a hexology, then a heptology when Martin split his fourth book into two halves (A Feast For Crows and A Dance With Dragons), there's no guarantee the series will even be finished after Book Seven. So of course Benioff & Weiss will be forced to improvise to finish their series by its projected Season 7 end date. TV waits for no man, even one with a readership as devoted as Martin's.

For four seasons, Thrones was one of the most faithful literary adaptations on television (when compared to shows that deviated freely from their source material like Dexter, True Blood, and The Walking Dead). So it would be a shame to see it finish so far off the mark from what Martin originally envisioned. Good thing, then, that the author already told the show runners how it all ends.

Well before Season 4 even premiered, Benioff & Weiss were assuring fans that their show would share its conclusion with Martin's novels. "Luckily, we’ve been talking about this with George for a long time, ever since we saw this could happen, and we know where things are heading," Benioff confirmed in March. "And so we’ll eventually, basically, meet up at pretty much the same place where George is going; there might be a few deviations along the route, but we’re heading towards the same destination."

Now, show runners aren't always the most trustworthy of people. (Anyone else still reeling from the writers of Gracepoint insisting that their ending would be "totally different" from Broadchurch's?) If you're hesitant to take Benioff & Weiss' word for it, I understand — but Martin himself is singing the same tune. In his (non)response to the controversy over Ramsay's rape of Sansa in the most recent episode, Martin addressed the dynamic nature of any adaptation. He described the show and his books as, "Two roads diverging in the dark of the woods, I suppose... but all of us are still intending that at the end we will arrive at the same place."

Does that mean that Barristan will die sometime during the next book? Or that Sansa will soon find herself in an equally untenable position as her onscreen counterpart? It remains to be seen how many of the showrunners' changes are prophetic and how many are drastic departures. Only one thing right now is certain: both Martin and Benioff & Weiss had better get Dany out of Meereen and over to Westeros sometime soon or there will be rioting in the godforsaken streets.