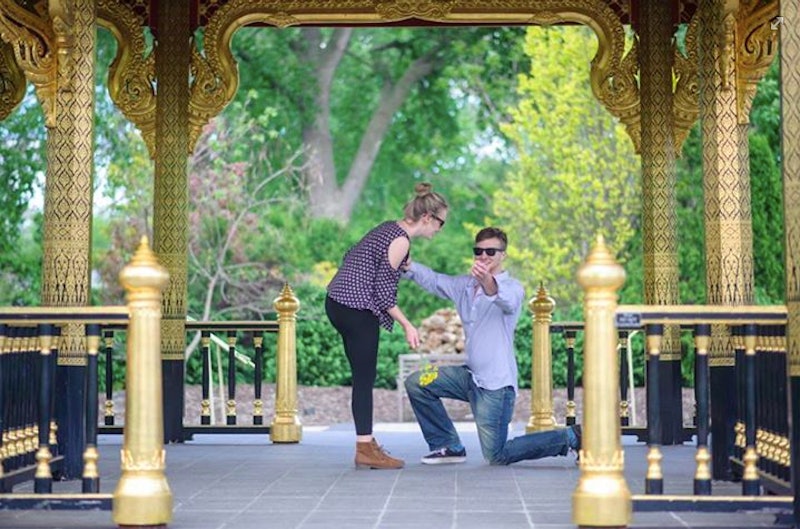 I have seen technology do some mighty things. It reunited siblings on Tinder, it got a Facebook apology from a bully 20 years after the fact, and it invented my religion, Netflix. I don't want to ask the Internet gods for more, because they have already given us so much and only asked for our time and our sanity in return. But I'm calling upon you, Internet, and everyone inside of you right now. This photographer is searching for the couple whose proposal he shot, and it is up to us to find them so they can see these beautiful pictures for themselves.

Photographer Peter Castro of Madison, Wisconsin, was on a shoot at a Olbrich Botanical Gardens when he witnessed this couple in the middle of a proposal. Doing what any photographer would do, he immediately captured the moment by taking pictures of the adorable moment to preserve it. And can I just say, this is possible the cutest couple of all time? I love their no frills, classy proposal style, and how unabashedly gleeful they seem. This is basically how all proposals should be, complete with a strange photographer lurking in the bushes and taking secret snaps of them.

In true Cinderella fashion, though, the happy couple darted off before Peter could get their information. Now the Internet is getting behind him in hopes of identifying the couple so he can share these pictures with them:

Castro has been accused by several on the Internet by trying to boost this for the sake of the post going viral, but when he first shared the photos hoping people would find them, they were originally set to private so that only people on his page could see them. He said on Facebook that he only set the photos to public after prompting from other well-wishers who were eager to help find the couple.

So do what you do best, Internet, and MAKE IT HAPPEN. Hopefully we find them before the wedding so Castro can take some beautiful pictures of that, too.