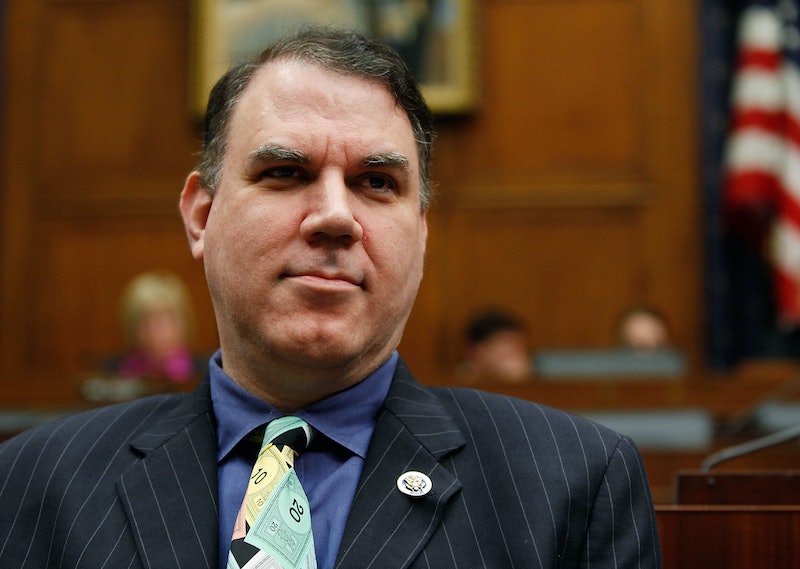 This week, Florida Democrat Rep. Alan Grayson had some choice words about his estranged wife, Lolita Grayson. Grayson, who has hinted at a 2016 Senate run, called Lolita a "gold digger" in the midst of a messy annulment. But even as the insults fly, Grayson has a solid pro-woman voting record to lean on if he decides to run. "I'll sum it up for you: gold diggers gotta dig. That’s all I’m gonna say," Grayson told Orlando’s ABC affiliate WFTV on Monday. Ugh.

That said, this seemingly-sexist insult is contrasted by Grayson's liberal voting record. He voted against the recent Pain-Capable Unborn Child Protection Act and against against banning taxpayer funds for abortion. He voted for the Lilly Ledbetter Fair Pay Act in 2009, along with supporting employment discrimination law amendments that issued grant money for salary negotiation training for girls and women.

But this isn’t the first time Grayson has come under the spotlight for using derogatory terms against women. In 2009, he called a female adviser a "K Street whore" on radio host Alex Jones' The Alex Jones Show, referring to the area in Washington, D.C. that’s full of lobbying firms. He later apologized in an emailed statement to reporters, writing that he "did not intend to use a term that is often, and correctly, seen as disrespectful of women."

Grayson is seeking an annulment on the grounds that Lolita was married to another man when the two said their vows over two decades ago. Lolita claims she was divorced nine years before her marriage to Grayson.

Grayson's voting record is in line with his party's stances on women's issues. But hurling insults like "gold digger" at his wife of 24 years — with whom he has five children — probably won't appeal to many pro-women Democrats.

And the 2016 elections loom, Democrats can’t take any demographic for granted. In 2008, Hillary Clinton’s internal polling assured her that 94 percent of women would vote for her, so she didn’t need to court them. Instead, a CBS poll found 53 percent of young women backed Obama over Clinton.

If Grayson decides to run for statewide office in swing-state Florida, he’s going to have to do some explaining — both to his female constituents and his party's nominee for president. But with his firmly pro-women voting record, it shouldn't be too difficult.