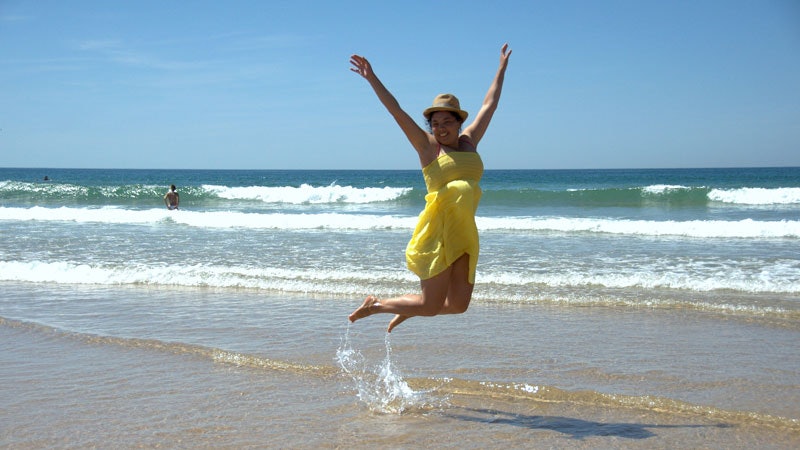 When I saw Rebel Wilson on the cover of the May 8 issue of Entertainment Weekly, quoting her as saying, “I’m pretty sure I’m the hot one,” I thought, “Yep. Sounds right to me.” ‘Cause there’s nothing more delicious and delightful to me than a woman who accepts her body the way it is and who uses it to bring joy to the world!

The movement toward body love and fat acceptance is having a real moment in our culture right now. More and more women are speaking out about wanting to end the war on our bodies (whether the war is coming from the inside or the outside). In the New York Times, I recently read that women are generally tired of trying to squeeze into restrictive shapewear. In Seventeen magazine I see articles like, “The Best Prom Dresses to Play Up Your Gorgeous Shape.”

This movement is thriving in YA right now. And while I’m no expert in it, I feel like I’m engaged in the dialogue. My new book Sweet is set on a luxury cruise launching a new diet sweetener called Solu that makes people lose weight. At the center of the story are Laurel and Tom, two teens who, for different reasons, aren’t taking the drug.

Laurel is a 17-year-old girl who has been dragged on the cruise by her wealthy best friend. She’s not eager to take Solu because, although she’s a size 14, she doesn’t feel compelled to lose weight — and she’s also terribly seasick. Tom is a former child actor who used to be chubby and food-addicted. He’s careful about what he eats and is unwilling to try out a new diet fad.

Sweet isn’t an “issue” book so much as it is a romance/horror book, but it does delve into territory of addiction, fat shaming, and body acceptance. Here are five other YA novels that investigate this complicated landscape — with, perhaps, a bit less blood and guts! There’s a range in here, from books that are empowering and uplifting, to books that make you think, deeply, about how weight impacts us.

This beautifully written, ‘80s-period-perfect novel is a love story, above all else. But the honesty that author Rainbow Rowell brings to the character of Eleanor just laid my heart open. Eleanor is a girl who is unapologetically big, 100 percent herself, and is targeted for it. Sometimes, when I read a truly stunning book, I feel jealous of the author. To Rainbow, I simply feel a deep gratitude.

Boy, am I ever excited to introduce you to Willowdean Dickson, the heroine of Julie Murphy’s upcoming novel Dumplin’. Willowdean lives in a small town where Football and Beauty Pageants are King and Queen. I love the chances Willowdean takes. I love the love triangle at the center of the plot, and the fact that Dolly Parton plays an important role in the story and most of all I love Willowdean’s very pure, straightforward insistence that she be treated as other girls are treated. This is a fun read — pre-order it and thank me later.

The Girl of Fire and Thorns by Rae Carson

Rae Carson’s Girl Of Fire and Thorns trilogy is a magnificent YA fantasy series, but it’s the first book in the series that is my favorite. We meet Elisa, the second daughter of the King of Orovalle, who has been marked for greatness, and is to be married off the young, handsome king of a neighboring country, and is a compulsive overeater. Yes! It’s so enjoyable to watch Elisa’s journey from a pampered and self-indulgent observer of her own life to a disciplined and canny leader, who will sacrifice for the people of her new country.

This One Summer by Mariko and Jillian Tamaki

At the center of Mariko and Jillian Tamaki’s haunting graphic novel, This One Summer , are Rose and Windy, two girls on the cusp of becoming teenagers who become obsessed with the dramas playing out amongst the townies who live at the small seaside town the girls visit each summer. The book has a thoughtful and languid pace — with a firecracker in the middle of it all — my girl, Windy. Oh, there is such freedom in the way this full-figured tween moves. It made me remember what it felt like before I got the message that I was supposed to be ashamed of my body.

Hey, remember how I said that sometimes I get jealous of an author when I read a particularly brilliant and insightful book? Yeah. That. (I got my eye on you, Madeline George.) Looks is an unflinching look inside a big, institutionalized high school. Meghan Ball is obese and acts as if she’s invisible. Aimee Zorn is an anorexic who is angry as Hell. The two of them become unlikely accomplices to exact revenge on a girl who has betrayed them both. This is not an easy book to read — I found it more tense and terrifying than some horror books I’ve read, but was an exhilarating book and by the end I felt victorious for Meghan and Aimee — and confident that somehow, they’d be OK.