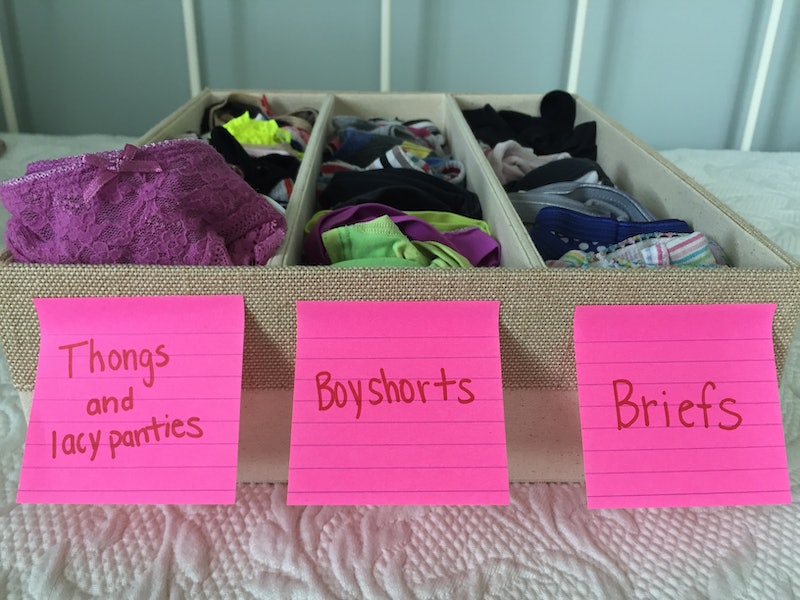 Most of us are pretty concerned with the way that we look and present ourselves, thus the importance of figuring out how to organize your underwear. Confused? Just hear me out: When we're going to a job interview, we want to look professional; for a night out, we want to get dressed up; and for a night in, it's pajamas all the way. And unless you’re frequently going commando, underwear is a big foundation for all of those outfits. Before we get dressed in any kind of clothing, we’re reaching for our knickers first. And that first step should be as easy as it possibly can be.

What does your underwear and lingerie collection look like? Can you find what you’re looking for easily? Or is it messy and impossible to navigate, easily making you an extra five minutes late because you can’t find your tan bra and matching tan briefs? For your sake, I hope that’s not true. But the reality is that we too often let underwear be an afterthought when it’s actually the first thing we have to put on our bodies. That being said, it is super important that the places we store those private items are efficient enough to keep our bras and undies organized so we have less of a headache in the mornings.

If your underwear pile looks like a volcano erupted, or if your bras, bralettes, and thongs are all jumbled together, here are five easy and simple steps to an organized underwear and lingerie collection. Because no one likes having to search far and wide for their favorite bra and undie. Am I right, or am I right?

If your underwear has holes and rips in it, it’s time to throw that pair out. Same goes for bras with wires poking out of them or missing hooks. Sure, that might be your favorite strapless bra in the whole wide world. But suffering pain from that lethal wire is not worth it.

Go ahead and toss those old items, as well as items that you don’t find yourself wearing often. Unless they’re staples like a tan Spanx brief or bralette, you’re probably not going to be needing them any time soon. Sort through your things and reduce your collection to only the items you need, so you won’t have to deal with unwanted and unused panties in the future.

I know. I once thought underwear was impossible to fold, too. But it’s all about the one-two-three trick. Take one side and fold it in, and do the same to the other side. Then fold the bottom in, and voila! Your underwear is folded.

Thankfully, bras don’t necessarily need to be folded. To keep their shape, bras are best stored lying flat — like what you see at Victoria’s Secret stores. Don’t fold one cup into the other, or try to lay other things on top of them. Instead, lie them within each other so it's also super easy to see your options.

Being organized is definitely easier when you have helpful organizational tools. The organizers I have are from Target, but similar ones can be found at Bed Bath & Beyond, Amazon, and even through various online retailers. You can also use items that are readily available in most homes.

Whether it’s a cardboard box, an old shoe box, or even plastic containers, if you think it’s a good size for your lingerie and underwear, then it will probably work. Use however many you think would be best for your drawer/closet/cabinet.

With the help of the basic organizers from Target, I was able to lay out my bras and undies according to their type, use, and color. As you can see, most of my black bras are at the front of the box while my lacy, colorful bras are at the back. Because I typically wear black bras on a more regular basis, this makes them super easy to reach for and super easy to put back at the end of the day.

The same goes for my undies, which I organized by type. No, you don’t have to label them accordingly with Post-It’s, but I did that to illustrate how each row had its own contents. You’re also welcome to organize them by color and fabric if you prefer.

5. Store Everything Else Together

As you can see, I have a lot of comfortable, unlined bralettes that I love to wear, so with the help of another organizer, I was able to put those together, along with some other odd items I decided to keep from the purge of Step 1.

Extra storage is ideal for everything from tights to a pair of sheer socks to anything else that doesn’t fit in either your bra or undies boxes. Because you won’t be reaching for this stuff on a daily basis, it will not only be easy to find when you do need it, but will also stay out of the way when you don’t.