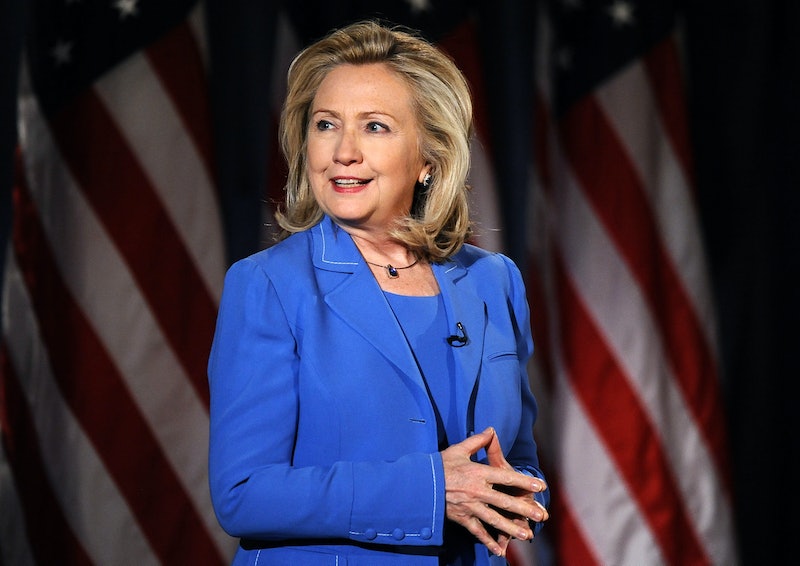 The first group of Hillary Clinton's private server emails have revealed much more than just correspondence about state secrets and affairs. We might have gotten a sneak peek at one of Hillz' life anthems, a song that surely must be at the top of her music playlist. In one email, Hillary Clinton quotes Kelly Clarkson lyrics and reminds us that yes, what doesn't kill you will make you stronger.

Spanning nearly 900 pages, 296 of Clinton's emails were released Friday in response to reports Clinton had spent her years as secretary of state using a private server instead of an official government account. Critics said that opened her correspondence, which often dealt with sensitive and confidential information, to hackers and accused her of scheming to conceal her memos. In an effort to be transparent, Clinton in March called upon the State Department to release 30,000 of her messages, tweeting, "I want the public to see my emails."

The Kelly Clarkson-inspired email comes in December 2012, just days after Clinton fainted and suffered a concussion. As she headed for the holidays to take care of her "cracked head," Clinton thanked former state deputies William Burns and Thomas Nides for testifying in her place at a congressional hearing. Nides responded, "I wish I could tell u I am looking forward to this but it would be a lie!" That's when this Clinton-Clarkson gem happened:

Well, what doesn't kill you, makes you stronger (as I have rationalized for years), so just survive and you'll have triumphed!

Clinton would later appear before a Senate committee in January 2013, during which she testified about what she and her department knew prior to the attack on the U.S. consulate in Libya. Ambassador Christopher Stevens and foreign service officer Sean Smith were among four Americans who died after Islamic militants stormed the building. The Benghazi attack remains a major blemish on Clinton's resume as she vies for the White House, one that she is set to answer again in a House probe sometime in the coming months.

In Clinton's own words, Kelly Clarkson's "Stronger" lyrics is a mantra she's lived by for years. Clinton is nothing but resilient and has proven time and time again she can overcome any obstacle that comes her way. From falling short in the 2008 Democratic primary race to now fielding questions about "Emailgate," Clinton gives us no reason she'll come out stronger than ever before.