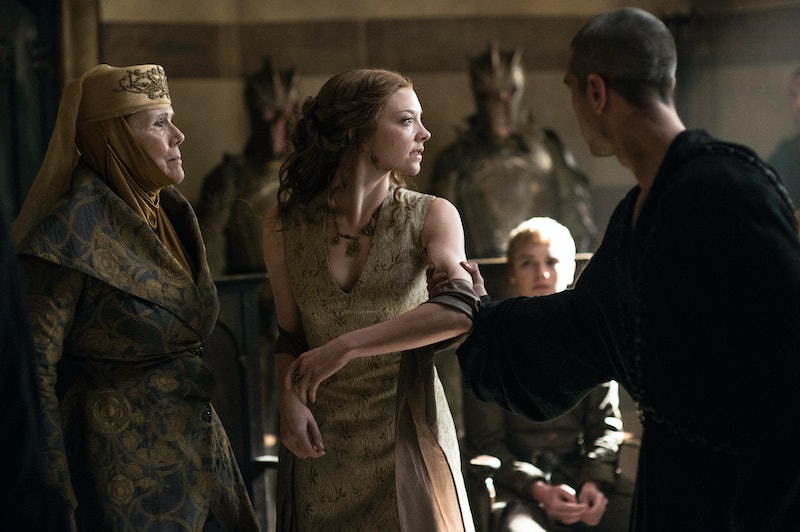 I can't believe that Margaery finally went off on Cersei in this Sunday's episode of Game of Thrones. Considering she is locked up for reasons beyond her control, I don't blame Margaery for calling her a "hateful b*tch." However, it was still a risky move, and one that could lead to a poor ending for her. Is Margaery Tyrell going to die on Game of Thrones? The Faith Millitant have imprisoned almost every heavy hitter in King's Landing. Surely some sentencing is coming next, right?

(Spoiler alert!) In the books, Margaery is still alive and kicking. Once Cersei is imprisoned for slander, as she is in the novels, the case against Margaery Tyrell is weakened and she is released into her family's custody. As of the last published book, she is still awaiting trial. Isn't it exciting, even for non-book readers, to be reaching the end of the written word on Game of Thrones? Anything can happen next. Truly.

Personally, I don't think Margaery is going to die this season, even though she was rude to Cersei. Her circumstances seem to be setting us up more for what happens to Cersei Lannister than anything else. If there were any Tyrell to be worried about, I still think it's Loras. Besides, Margaery's alleged crimes on the HBO series are much lighter than the books. In A Feast For Crows, Cersei accuses her of having had at least nine lovers while married to Tommen. Witnessing her brother's "crimes" is nothing compared to that.

Maybe this is all part of Littlefinger's plan to crumble King's Landing from within. Remember when he was talking to Olenna Tyrell and said that he was going to give her the same thing he gave to Cersei, "a handsome young lad" — that's gotta be everyone's new favorite bigot, Lancel Lannister, right?

I'm not sure where this is all leading. I can see Littlefinger wanting to pit these two rich families against one another, but perhaps the Tyrells will team up with the Lannisters to combat the Sparrows. Maybe the Tyrells will fight them on their own. However, Natalie Dormer has already taken Margaery Tyrell to places the books never have in terms of esteem and likability. Surely there's no way that her story is over just yet. Plus, if the Faith Millitant aren't stopped soon, there's nothing preventing them from taking King Tommen Baratheon who, as Sansa Stark boldly reminded us this week, is also a bastard. Surely the "investigation" of Cersei has uncovered this, right?

No matter what happens, I wouldn't be too worried about Margaery yet. Not only is Cersei out of play for the moment, but the Dowgeger Countess, I mean, Lady Olenna has got this on lock. Trust that gran to get it done!