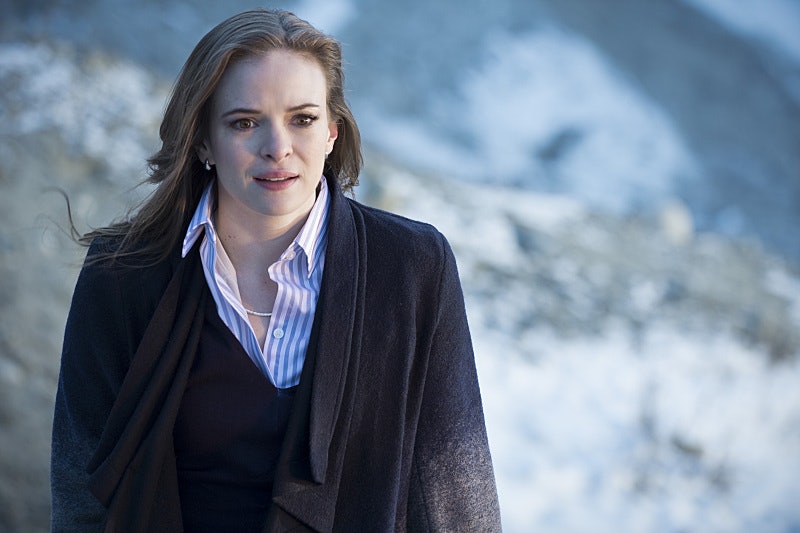 I'm really excited for this summer, but probably not for the same reason as most people. Rather than looking forward to all of the movies coming out and brand new television shows premiering, I'm thrilled to have three whole months to think about Caitlin Snow becoming Killer Frost on The Flash. In the final moments ofthe Season 1 finale, we saw a quick glimpse of Caitlin doing her best death stare off into the distance. There are still a lot of ifs, ands, and whats for her big introduction, but one thing is crystal clear — Killer Frost is coming to The Flash .

She first appeared in a super quick blink-and-you'll-miss it moment, while Barry ran through the Speed Force trying to close up a wormhole above Central City. Actress Danielle Panabaker had been teasing Killer Frost's arrival for some time, so I thought she'd show up before the end of the season. While it was only in some sort of alternate-reality that Barry passed through, we still saw her, so there's no turning back now. This leaves me all summer to figure out exactly when this character will be introduced and how. Just what might turn Caitlin over to the dark side?

Flashpoint Is A Go

There's a high chance we'll see elements of DC Comics' Flashpoint on The Flash. Some of it has been hinted at already, and with the events of the finale — and everything involving Barry's mom — it seems like this is a likely scenario. With Flashpoint, there'd be no reason for Caitlin to suddenly transform into a villain, she'd just already be one in the alternate timeline it introduces. Actually, she'd be hailed as a hero, since in Flashpoint everything is opposite to how it should be. Confused yet? The Flash has some hard work ahead if it goes this route.

But what if Flashpoint isn't introduced, and when Barry returns to Central City, everything is still the status quo? What would send Caitlin into a villainous rage? The death of her new husband, probably.

While I don't want Ronnie to die, and Caitlin certainly doesn't either, I have a sinking feeling that he might. Have you noticed that all of the new Legends of Tomorrow trailers only show one half of Firestorm, and it's the Victor Garber/Martin Stein half? It seems like Ronnie should be in Legends of Tomorrow, but for some reason he's not, which is worrying. I think that early in The Flash Season 2, Ronnie is going to suffer an untimely death, setting Caitlin on a quest for vengeance that turns her into Killer Frost.

In the comics, Caitlin was working at S.T.A.R. Labs, and then learned that she and her colleagues were secretly working for H.I.V.E. Know who plays a big part in H.I.V.E.? Damien Darhk, who has already been referenced on Arrow many times and may even become the series' next big villain. Before you start getting excited about crossovers, know that H.I.V.E. is responsible for giving Caitlin her icy powers in the comics, so the introduction of Darhk might lead to Caitlin's demise.

Killer Frost Is In A Different Dimension

The Flash loves time travel, and it looks like that affinity is leading to some alternate realities. What if there's another reality out there where Caitlin is Killer Frost? Not a Flashpoint situation, where the characters find themselves in another timeline for an extended period of time, but a reality where Barry keeps ending up alone by accident and runs into Killer Frost. That would leave him confused and conflicted, because in one reality Caitlin is a sweet friend, and in the other she's a cruel enemy.

In The Flash finale, Cisco learns he's a metahuman (high-fives all around!) and it appears that his powers let him see other realities. So what happens if Barry's not the one who finds an alternate reality, but Cisco? Everything always happens to Barry, but in this case, I think it'd be great if Cisco was the one who needed to deal with Killer Frost instead. He and Caitlin are the BFFs of S.T.A.R. Labs, and I'd love to see Cisco hanging out with his friend during the day, and then Killer Frost haunting his nightmares at night.

I think everyone, myself included, is quick to jump on the idea that once Killer Frost is introduced, she'll immediately be a villain. But what if she's not? Let's say Caitlin learns of her metahuman powers and decides to use them for good. Cisco's given the task of naming her — obviously — and he chooses the opposite of everything she is. He calls her "Killer" and then everyone is laughing (and crying) over it.

Let's not forget, this is The Flash. Even during its darker moments, there's always a light at the end of the tunnel, so Killer Frost may not be the villain we're expecting — at least not for long.