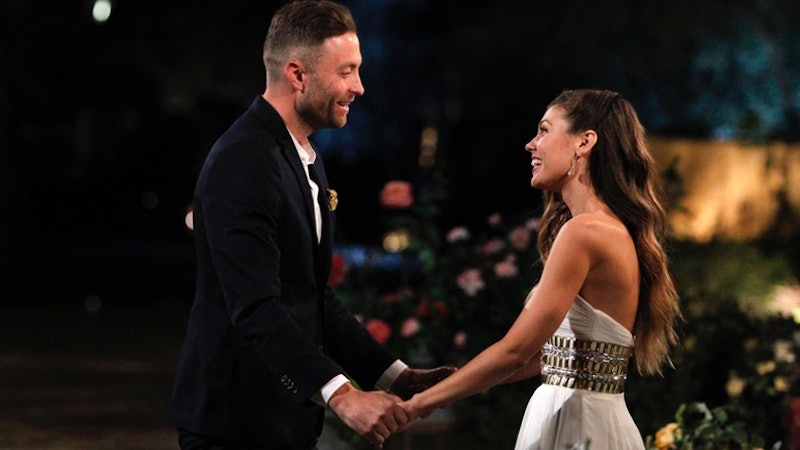 For those of you who missed the last few minutes of Monday's episode of The Bachelorette, let me remind you: Brady left The Bachelorette mansion to find a still-weeping Britt in her hotel room. They then spent a glorious week together holding hands and eating ice cream, during which Brady seemed to not change his shirt once. Then, at the end of it all, Brady officially asked Britt to be his girlfriend. I was "aww"-ing all over the place, y'all. Though some are concerned that Britt's instant connection with Brady was just a bit too reminiscent of the beginning of her relationship with Chris Soules, I have to admit: I'm all for Bridy (or maybe Bratt?), and I'm seriously hoping that Britt and Brady stay together.

Part of me can't really shake the notion that if Britt had ended up as the Bachelorette and Kaitlyn had been sent home, one of the guys probably would have left the mansion to go pursue Kaitlyn in the same fashion as part of some producer-conceived storyline. But, I think we can all agree that Britt and Brady's dates were pretty cute. And, if Brady really did feel as strong of a connection as he says he did when they first met on premiere night, then good for him for going after he wants!

I've got high hopes for this couple, and I'm hoping you all do, too. In case you need some convincing, here are seven reasons why Britt and Brady should stay together.

They'd Have The Cutest "How We Met" Story Ever

This is as close to a fairy tale story as you can get in the real world. Guy meets Girl, Girl disappears, Guy chases after Girl, Girl and Guy fall madly in love and stay together forever and ever. It's one for the grandkids, for sure.

They Could Give Their Kids Names All Starting With "Br"

It would be SUCH a missed opportunity for Brady and Britt if they didn't. I know a family whose names all start with the letter A and I secretly (well, I guess not-so-secretly anymore) think it's the cutest thing ever.

Their Kids Would Have The Best Hair Ever

Even better than this cow's, maybe. And that's saying something.

They Could Make Sweet Music Together

Brady's the musician of the group, and honestly, he's not half bad. And, remember how Britt had to sing during that one group date on The Bachelor? She was terrified to do it, but, of course, ended up being amazing. Yeah, Britt and Brady could do that together. I'd love to sit in on a karaoke sesh with them.

He's The Complete Opposite Of Chris Soules

Mostly because he's not a farmer and doesn't laugh like a dolphin and also probably doesn't want to force his future wife to leave her entire life behind and ride a tractor for the all the days of her life. And, considering Britt and Chris didn't work out, that's probably a good thing.

Britt doesn't need all of your double Bachelorette silliness to find love!

Anyone Else Smell A Spin Off?

Because Chris Harrison probably does.