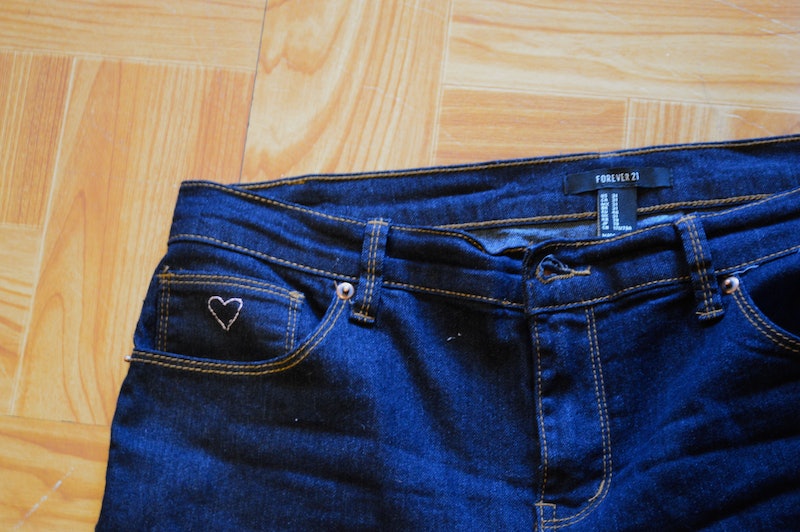 Few movies make me as instantly nostalgic as Sisterhood of the Traveling Pants . Perfectly capturing the adventures of adolescence, it’s the kind of movie that causes laughter and tears. If you've never seen it, it’s exactly what it sounds like — friends bonding over a pair of pants. But there’s magic, too! Somehow the vintage jeans miraculously fit all four girls, despite their different body types. So they spend the summer sharing the pants via snail mail. (Spoiler alert: Good things ALWAYS happen in the pants.)

Based on Ann Brashares’s best-selling books, the movie was easily one of my favorites growing up. I still remember seeing it in theaters and being so inspired by the story that my friends and I bought matching sunglasses at Claire’s afterwards. At 14-years-old, it was our version of sharing jeans. Not *quite* the same, but close enough!

Believe it or not, Sisterhood of the Traveling Pants came out 10 years ago today. And even better news? The actresses (Alexis Bledel, America Ferrera, Amber Tamblyn, and Blake Lively) are all still friends IRL and they’re reportedly working on a third movie. To celebrate, I asked three of my best friends to help me recreate the film’s plot. We found a pair of jeans and shared them in the name of journalism — and friendship.

Before we could begin, we needed pants, so my friend Kim and I embarked on a journey to find the perfect pair. For the sake of time and money, we headed somewhere that practically feels like a thrift store (because you have to scour through piles of clothes to find anything good) ... I'm talking about Forever 21, of course.

Overwhelmed by the absurd amount of denim, I looked like a human version of my favorite emoticon: ¯\_(ツ)_/¯

After searching through plenty of interesting options, we ultimately settled on a pair of dark jeans. A. Dark-wash is flattering on everyone and B. They were only $8. Win-win!

Being a bit strategic, I chose pants that were a size smaller than what I usually wear — in the hopes that they'd stretch to fit me, but not be too humongous on the others.

Kim and I were so excited when we finally found the pants that we even took a selfie in the dressing room (which also illustrates our height difference).

Here are the rules of the experiment:

Besides Kim, I enlisted my BFFs Amanda and Vivian to participate. As it turns out, they're equally big fans of the movie and didn't protest when I asked them to share jeans with me. Their only complaint? Being unable to decide which of us was most like Lena (aka Alexis Bledel's character and our unanimous favorite).

Kim was the first to test out the pants. In the spirit of the movie, she embroidered a heart on the pocket. Since we had to wear them in public, we didn't want to go overboard decorating with patches or Sharpie.

During the day, I received a series of g-chats from Kim and tried to hold back laughter.

Despite her initial struggle, here's what she told me later on:

When I first put on the pants, I was surprised by how well they actually fit me! Even though the pants weren’t the “perfect” fit like in the books/movies, they fit well enough that I could wear them to work. I’m the tallest one in our “sisterhood,” so the pants were a bit too short, but after I cuffed them at the ankles they looked pretty cute!

She paired them with a grey blazer and sparkly tank top. And while she said it was annoying that they fit funny in the "crotcheral region," she deemed it not bad for $8 jeans.

Kim had such a productive work day that she stayed at her office until 8 p.m. — without even realizing how late it was. She credits the pants:

I am a true believer in the magical powers of the pants! On my subway ride into work, I actually sat across from a girl who was wearing a mirror image of my outfit, only in opposite colors! Perhaps she was also wearing traveling pants? I’m not sure if was the magic of the pants or just my own brilliance, but I absolutely rocked it that day at work.

As a longtime fan of the Sisterhood, Kim said her 13-year-old self (who read all the books and begged her mom to let her see the midnight premiere of the movie) would be so proud.

When it was my turn, I originally planned to only wear them grocery shopping. That's because I'm not a fan of jeans at all. I almost always wear either dresses or leggings. But since it was the Friday before Memorial Day Weekend, I figured — eh, why not? I sent the following text to Kim and hoped for the best:

To be honest, they were a tiny bit tight on me. They buttoned, but I wouldn't wear them on a regular basis. I decided to wear a long top to camouflage the sliiiiight muffin top they gave me. #ProblemSolved

At least I could still comfortably cross my legs on the subway. That's really all that matters, right?

I swear, the jeans were magical! When I got to the subway station, the train came immediately, even though the sign said it'd take 5 minutes. Then as soon as I got to work, my boss told everybody we could leave early that afternoon for the holiday weekend. (Score!) Oh, and there were cupcakes in the office. By my standards, it was a wonderful day — and I totally credit the power of the pants.

The following day I passed the pants onto Amanda, who wore them on a Saturday at Smorgasburg, aka Brooklyn's food-filled market. It was so sunny and nice out that I'd like to think the pants controlled the weather too.

For the record, Amanda is taller than me, but shorter than Kim. In her own words, here's how they fit:

I wasn't too sure what to expect. Seriously, how could one pair of pants fit four uniquely different ladies inside and out? But believe it or not, all I had to do was throw on a belt to accessorize and feel wrapped up in the love and inspiration of the Sisterhood.

Well, while wearing the pants, Amanda hung out with me... So that means it was automatically a great day. (Kidding!) But hey, her own answer says the same thing:

Is is weird to say that eating food while wearing the pants is magical? I think not! Fresh mozzarella balls, chicken parmesan sliders, and a chocolate chip cookie ice cream sandwich will never taste as good, because usually when I'm eating a feast, I have to wear sweatpants. Being able to spend a portion of my Memorial Day weekend with one of my best friends & fellow Sisterhood sisters was the perfect way to share the pants, along with some pretty delicious decisions!

Like Kim, Amanda described herself as an "OG Sisterhood of the Traveling Pants fan" and said, "Having the pants to connect us through distance has only added to our friendship bond!" I second that sentiment.

Last but not least, Vivian wore the jeans. Because she lives way up in Washington Heights and I'm in Brooklyn (aka the NYC equivalent of when Lena was in Greece and Tibby was in Maryland), we actually did things the old-fashioned way and mailed them.

After the pants arrived, I received this gem of a text message from Vivian:

Here's what happened when she actually put them on...

I had two initial thoughts when I first put on the pants: (1) these pants are already failing at their one job because they're not even staying up (2) huh, I guess this is what Justin Bieber feels like when he puts on his Justin-Bieber harem pants.

Of the four of us I am the most petite (in height and in frame), so suffice to say the pants didn't ~actually~ fit. But if there's one thing Pinterest taught me, it's that where there's a will, there's a DIY way.

In order to make the pants work for her, Vivian pinned them in the back — like what happens at photo shoots if clothes are too big on a model. (Whatever works!) Then she hung around her apartment while wearing them and contemplating the movie's logistics.

I made myself a snack, sat on the floor of my apartment, and wondered how I ever bought into the story that this one pair of pants fit all 4 girls. Blake Lively is so much taller than America Ferrera... How am I just noticing this?

Despite their less-than-perfect fit, Vivian became a believer in the pants' magic — all thanks to her dog. She says,

When I took off the pants I decided to take some photos, as a reminder that the world is thankfully not a one-size-fits-all kind of place. My dog then decided that she too needed to be part of the sisterhood, so she sprawled across the pants. I, of course, turned this into a bonding moment with my pup, who was upset at me for taking her to the groomer that morning, and made it into a photo shoot. Magic ensued.

See!? The pants really are magic if they even fit a tiny maltese puppy named Mila! Or at least they make a great blanket.

Over the course of the week, we discovered the secret of the pants... They must've been jeggings! It's the only plausible explanation, because confession: Ours were jean leggings. Still, they had some denim, pockets, a button, and zipper, so it totally counts.

Having four people wear the same pants was definitely a stretch (literally and figuratively) since we're all different sizes. I even apologized to Vivian beforehand, because I knew she'd probably swim in them. I said something along the lines of "sorry my butt is so big!" Her response?

And THAT series of texts proves why she's an excellent friend. Pants that magically fit everybody's body may not exist, but friends who accept and embrace your differences really do. Overall, it was fun(ny) to share jeans — and memories — with these girls. If anything, it shows they're good sports, since they went along with the idea and let me write publicly about pants fitting them awkwardly. If that's not what sisterhood is all about, what is?