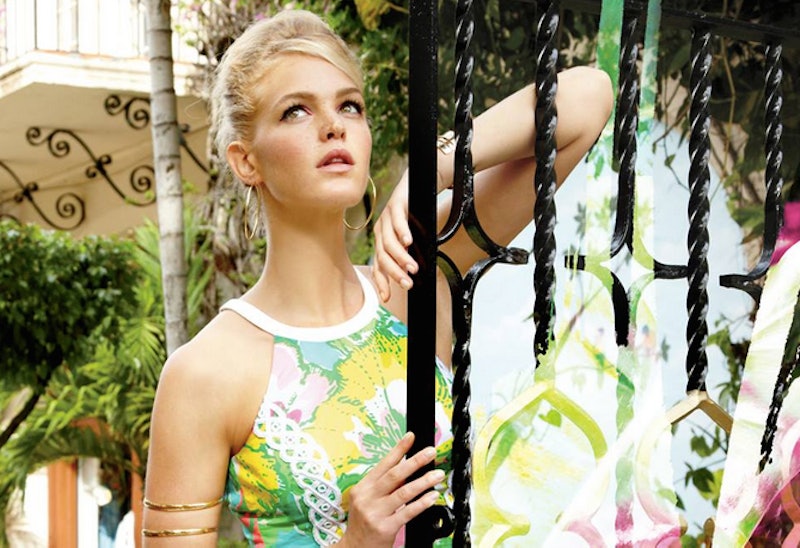 Just a few weeks ago, mainstream media and plus-size bloggers alike were flipping out in the best way possible over Lilly Pulitzer's spring line. But this week, what seemed like an innocent, behind-the-scenes tour of the pastel print-covered headquarters of one of America's most recognizable preppy brands turned into Lilly Pulitzer being accused of body shaming.

The Cut shared snapshots of their tour around the LP offices in King of Prussia, Pennsylvania alongside interviews with a few employees — pretty standard stuff. That is, until writer Caroline Moss Tweeted the photo of an "inspiration board" that contained a few hand-drawn cartoons with body shaming messages emblazoned on them.

The cartoon images with exaggerated fat features are accompanied by the charming captions: “Just another day of… Fat, White, and Hideous…You should probably just kill yourself,” and, “Put it down, carb face.” Ironically, that particular slide in The Cut's photo roundup is followed by another image of cupcakes, macarons, and mac and cheese.

Jane Schoenborn, Lilly Pulitzer's vice president of creative communications, has said in a statement that the images were one individual's work, posted in their own personal work space, and that the brand does not condone the messaging: "While we are an employer that does encourage people to decorate their own space, we are a female-dominated company and these images do not reflect our values. We apologize for any harm this may have caused.” But while I'm disappointed and disgusted by the images themselves, I'm unfortunately not shocked by them in the least.

One of the biggest misconceptions I've noticed that people have about the size acceptance and body positive movements is that folks think the end goal is just to be told that fat girls can be pretty. "Tess Holliday covered People Magazine, are you guys done complaining yet?" seems to be how you could sum up very recent responses to the body positive movement — but it's so much more than being "allowed" to feel OK about the way we look.

Fat phobia and fat shaming are entrenched in our culture, in ways that are often invisible to most people who have never been on the receiving end. They're everywhere, almost all the time, and most people aren't even aware that they're contributing to it — or they are and they just don't care.

This is what stung so deeply about the "might as well kill yourself" cartoon. It's so drastic, so dramatic, and so blatantly hateful. It feeds the inarguably racist idea that all black women are plus-size. Yet a person put it on their wall at work and no one batted an eye. This kind of shaming is so normal that when the folks at Lilly Pulitzer heard that a massive publication was coming to visit them, no one even thought to take it down. Because people don't tend to think twice about reposting hateful memes, making snarky comments about fat people, or laughing at fat jokes.

Being fat means being reminded constantly that you are often looked at as less than human — worthless — and then being blamed for being hated and mocked. More visible plus-size people, including models, in the mainstream eye are helping to humanize fat people for sure. But their visibility alone isn't a sign that fat phobia is over. Thin people calling Tess Holliday "pretty" or commenting that "Rebel Wilson is killing it on the red carpet" aren't the end of fat phobia, either. The end of fat phobia won't be realized until telling fat people to "kill themselves" isn't something that's tolerable in a workplace. Or anywhere.

More like this
I Have Eyebrow Alopecia – & Microblading Gave Me My Confidence Back
By Jessica Morgan
Bustle Newsletter: June 30, 2022
By Stephanie Talmadge
Olivia Munn Got Real About How Her Body Hasn’t “Snapped Back” Post-Pregnancy
By Stephanie Topacio Long
12 July 4th Beauty Sales To Jump On ASAP
By Jordan Murray
Get Even More From Bustle — Sign Up For The Newsletter