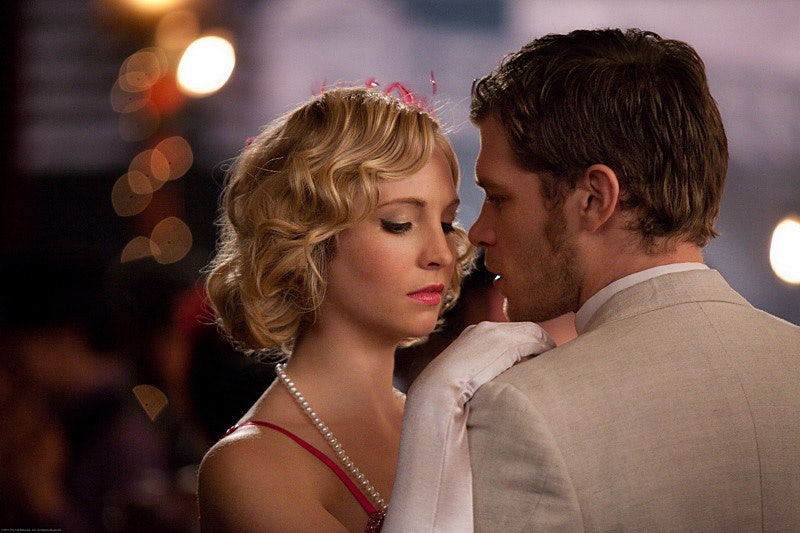 It was a dark day in television history when the world was forced to close the chapter on Damon and Elena during The Vampire Diaries Season 6 finale. And while I know no amount of time will ever be enough to fully process the end of a such an epic romance, I can promise you that the pain will at least get slightly easier over time. Well, not so much easier as it will just turn your heart completely numb throughout the next few years. I say this because I know exactly what you're going through, not just because I too was an avid Delena 'shipper, but also due to the fact that I lost one of my all-time favorite TVD pairings, Klaroline, not too long ago.

Let me just tell you firsthand how difficult and aggravating it can be to root for a duo who aren't even on the same show together anymore. (It sucks, basically.) And even though I have yet to fully give up hope that Caroline will eventually cross over to The Originals , I still know the dread that comes with thinking that your OTP is DOA. I loved these two together. Pure and simple. In fact, I'm going to go out on a dangerous limb right now and say that there were times that Klaroline was even better than Delena. That's not to say that Damon and Elena didn't have one of the greatest love stories of the series because they totally did. I'm simply pointing out that Klaus and Caroline also had their fair share of swoon-worthy moments that could easily rival all other Mystic Falls match-ups. For example…

When Klaus Gave Caroline A Drawing

Sure, this moment may not have been as sexually charged as Jack and Rose's Titanic scene, but that didn't stop this moment from feeling extremely intimate nonetheless and proved that this Original villain had a heart after all.

When They Dance Together In '20s Garb

Granted, every dance scene between these two is chock-full of chemistry, but this one in particular has always stood out. I mean, if a sexy vampire offered to take me with him and show me the world, you better believe I'd say yes. No compulsion needed.

Normally, the relationships on this show are so tortured and serious. So it was a breath of fresh air to see Klaus playfully tease Caroline in this rather adorable exchange. Seriously, how can you watch this scene and not fall in love with them? It's impossible.

Not only does Klaus give Tyler his freedom back, but he also says one of the most swoon-worthy lines of the entire series: "He's your first love. I intend to be your last, however long it takes." And the fact that it was all said in a British accent was just icing on this delicious 'shipper cake. Sorry, can't talk right now. Currently watching this scene over and over again until the end of time.

When Klaus Feeds Caroline His Blood

Up until this moment these two characters had barely spoken a word to one another, and yet their chemistry became instantly palpable in this moment when Klaus showed us something we'd never seen from him before: mercy. For all the death that he's caused, he took the time to save Caroline's life. It wasn't a duo we expected to root for, but it's one that has definitely made this supernatural journey all the more interesting. And it all started with this initial spark.

When Klaus & Caroline Get Hot & Heavy

You know I had to include this, right? I mean, it's pretty much a given. I'm not what you would call a woods-y kind of girl, but I've developed a whole new appreciation for any type of forest setting thanks in large part to this steamy scene. After over two seasons of waiting, Klaroline finally gave 'shippers what they were hoping for and boy-oh-boy did they not disappoint.

More like this
Somebody Convince Soccer Mommy To Make A Metal Album
By Samantha Leach
Vecna Officially Has A Fan In 'Stranger Things' Star Jamie Campbell Bower
By Alyssa Lapid
Yes, Joseph Quinn Is Actually Playing The Guitar In This Epic 'Stranger Things' Scene
By Alyssa Lapid
Jurnee Smollett’s Heart Is Healing
By Rebecca Carroll
Get Even More From Bustle — Sign Up For The Newsletter