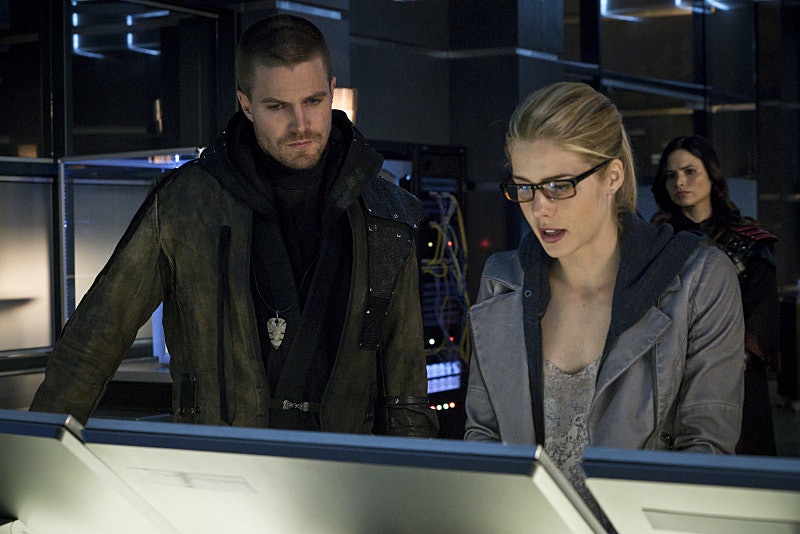 Mysterious parentage is a staple theme in superhero stories. Oliver Queen learned back in Season 1 of Arrow that both his mother and father had a lot more going on in their shady lives than getting their picture in the society pages on the regular. And his lady love Felicity Smoak already comes fully equipped with a murky past. By now, fans have met Felicity's mom Donna twice (and she's fabulous), but what of her estranged father? My guess is — though he remains physically in the shadows — that his name (or the name he's taken) has already been thrown around on the show. What if Felicity's father is Damian Dark?

Team Arrow hasn't seen Damian Dark yet, nor has he even been cast. But the very idea of him was introduced by Ra's al Ghul in Season 3, and his presence loomed over the finale. In Arrow context, Dark is a bit of a renegade member of the League of Assassins. Having lost the Ra's title he thought was his right, he left Nanda Parbat to, I assume, cause trouble elsewhere. Dark also has a base in DC Comics lore. Known there as Damien Dahrk, he has some loose ties to H.I.V.E., but largely operates on his own. He's also a genius, particularly in regards to technology and digital communication. Why does that sound so familiar?

If one loves comic book shows and movies the way I do, one learns to question everything and accept every passing detail as a hint. In Season 2, Felicity briefly mentioned a deadbeat dad, who left her and her mother when Felicity was very small. Ears across the Arrow fandom instantly perked up; open doors are walked through sooner or later. That conversation was groundwork being laid for a major reveal.

He came up briefly again in "The Secret Origin of Felicity Smoak" — that would be the episode where the audience met and fell in love with Donna. But it was an arch remark in Season 3's "Public Enemy" that really got the fandom's wheels turning. "If your father were here..." Donna began. "He'd be arrested," Felicity finished.

It all makes sense, no? Damien Dark is charming and brilliant; who says he couldn't have swept Donna off her feet? But whatever conscience he may have possessed jumped ship long ago. That's why Donna and Felicity have been able to flourish in his absence. Donna is much savvier than she first seems; eventually, she realized that she was better off alone. And now it appears that Felicity's knack for computers and her universally intimidating amount of intelligence is inherited. "The Secret Origin of Felicity Smoak" showed that Felicity had a choice when it came to how she'd use those smarts. She's so incredibly good that you just know that she'd make an amazing bad guy. But she knows that her dad chose the other path; her heroism and empathy are a direct reaction to his criminality.

But how much does Felicity know? Does she think that her father is a common hacker? I can't imagine she'd have let any connection to Ra's go unexplored while Oliver was being held captive. Though "Damian Dark" might be news to her, I do think that it will be Felicity's ties to him that bring her and Oliver back to Starling City from their chaos-free romantic getaway. It's time for Felicity — a superhero in her own right — to finally confront and bring down her dad.

More like this
'The Summer I Turned Pretty' Book Ending Is An Emotional Rollercoaster
By K.W. Colyard
The Future Of 'All Creatures Great & Small' Is Confirmed & Wedding Bells Are Ringing
By Rebecca Fearn and Frances Stewart
A New Season Of The Midwich Cuckoos Could Be Coming “To A Town Near You”
By El Hunt
Regé-Jean Page Spoke Out On His Rumoured 'Bridgerton' Return
By El Hunt and Maxine Harrison
Get Even More From Bustle — Sign Up For The Newsletter