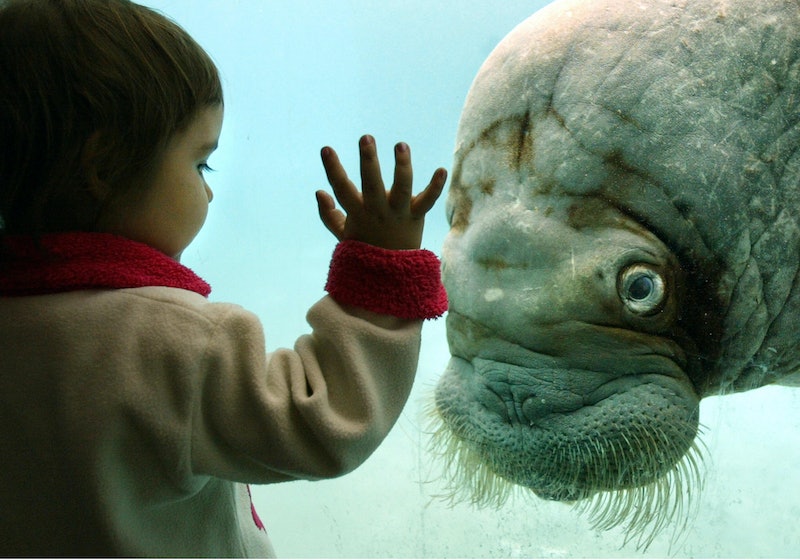 You know that thing where you're bored at work or in class and you just think to yourself, "man, I wish I could just leave my life behind and escape to the Alaskan wilderness and live amongst the majestic walruses"? Well, now you can finally get your wish, all from the comfort of your own desk: Walrus Cam is a real thing that exists. It's exactly what you think it is — that is, a 24-hour live-stream of walruses doing their thing on the northern tip of Alaska's Round Island. And hey, guess what? It turns out that for walruses, "doing their thing" consists of a lot of cuddling in large groups and sleeping, AKA the best existence ever.

So, who can we thank for this magical, heaven-sent gift of Internet perfection? The project is being funded by Explore.org, a philanthropic organization that donated to the Alaskan Department of Fish and Game in order to endow Walrus Cam. The grant has allowed the government, which has been struggling financially as a result of low oil prices, to put two full-time staffers on Round Island to tend to Walrus Cam, as well as to greet the island's few visitors each year. Additionally, according to the Associated Press, the staffers are there to "prevent boats or aircrafts from spooking the two-ton walruses and sparking a stampede." Please stop whatever you're doing right now to imagine a walrus stampede. Also, for anyone interested in joining me, I'm officially starting a punk band called "Walrus Stampede."

Also of note? Walrus Cam actually made its debut way back in 2005, only to be shut down shortly after its creation due to problems with the cameras and a lack of funds. Explore.org's donation has made it possible for Walrus Cam to begin streaming again for the first time in a decade — and it is officially the best. Just saying.

You have to check out the feed yourself, because it's truly mesmerizing to watch these flippered marine mammals live their sweet walrussy lives; in the meantime, though, here are some screenshots to whet your appetite, accompanied by what are certainly scientifically accurate captions of what these babies are thinking.

The whole walrus colony is sleeping on the beach, but one brave little walrus — let's call him Gabriel — is forging his own path into the icy blue Alaskan waters. Swim, Gabriel! Swim as fast as your flippers can take you!

2. "What The Fresh Hell Is This Camera Doing All Up In My Whiskers?"

Look at that side eye. So frosty.

Do not make me tusk you, because so help me God, I will tusk you.

Duuuude, such a good idea.