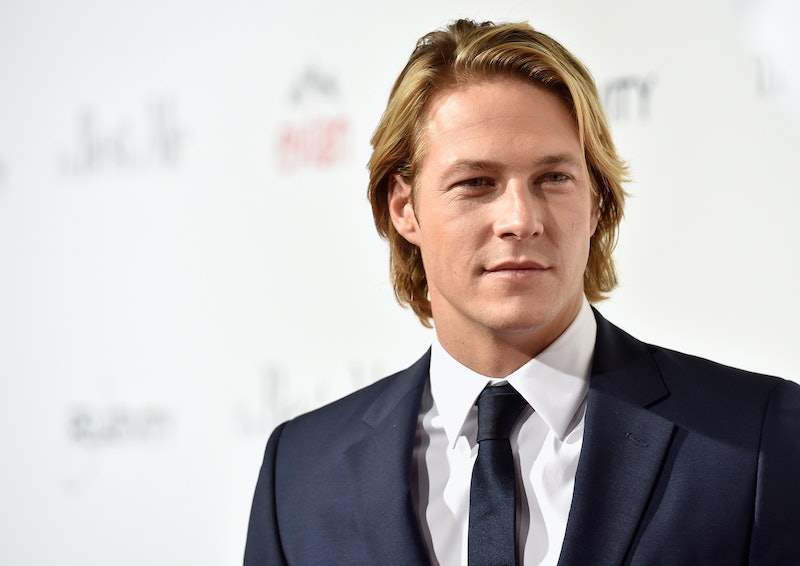 The first trailer for the remake of Katheryn Bigelow's 1991 film Point Break has just been released and it, well, looks as death-defying and ridiculous as ever. The original is a cult classic with legendary performances by Keanu Reeves as FBI agent, Johnny Utah, and Patrick Swayze as Bodhi, the socially conscious criminal. Naturally, many die hard fans will be annoyed at the idea of a Point Break remake, but as I see it, let's just have some fun! The new trailer looks crazy, and one stand out I definitely noticed is lead actor Luke Bracey who is taking on the role of Utah.

At first glance, it definitely seems like the blonde, tanned, shaggy-haired actor would be a more likely fit for Swayze's character, Bodhi, who was a surfing vigilante, if you will. I had never seen Bracey's face before seeing the trailer, so I was immediately curious about who this actor was and why he looks almost exactly like Chris Hemsworth — something I have no problem with at all. According to Screen Rant, Bracey was in the running for the role along with more seasoned box office actors Nicholas Hoult, Luke Grimes, and Garret Hedlund, but ultimately got the role of his life time. So, who is Luke Bracey and why will we all have a crush on him soon?

Something beautiful is happening in the waters Down Under, because the land that brought us the Hemsworth brothers is also the homeland of Luke Bracey.

He was a former cast member on Home & Away

The 26-year-old actor made his debut as Trey Palmer on the Australian soap opera. Home and Away has famously launched the careers of many Hollywood stars, including Isla Fisher, Heath Ledger, Chris Hemsworth, and Ryan Kwanten, among others.

He is rumored to have dated a very famous starlet

In 2011, he starred opposite Selena Gomez and Leighton Meester in the comedy Monte Carlo. Gomez and Bracey were reportedly caught holding hands and canoodling at Golden Globes after party in February 2013, but it doesn't seem like their relationship went any further.

He is not into social media

Unlike many young Hollywood actors these days, Bracey seems to shy away from any sort of social media, which means terrible things for people like me. His Facebook, Twitter, and Instagram were last active in October 2014, so he needs to shape up! I have a feeling his fan base is about to explode very soon.

He is part of the Nicholas Sparks' leading man club

He got his biggest role to date playing the young version of James Marsden's character in The Best of Me. As has been proven in the past, a Nicholas Sparks film adaption has the potential to give a new actor the boost needed to become the object of desire for teen fans (actually, for anyone) everywhere. Ryan Gosling became a bigger star after he played Noah in The Notebook and Liam Hemsworth became a household name after starring opposite Miley Cyrus in The Last Song. So be sure to keep an eye out for Luke Bracey, and not only in Point Break.