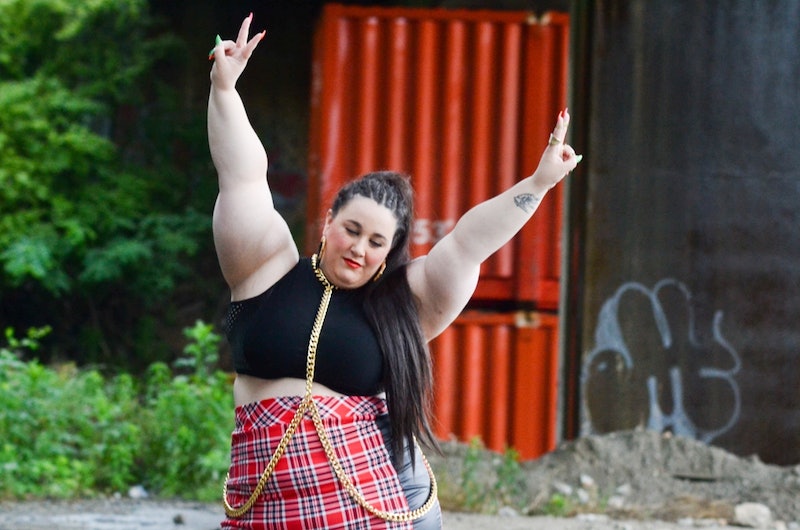 Real talk: I am skeptical of the word "thick" when used in reference to my body, so when I heard that #ThickGirlAppreciationDay was trending on Twitter, I braced myself to see a lot of cisgender, smaller hourglass figures. Cosmopolitian's headline on the topic said it supported a body positive message, but the Tweets I saw — for the most part — showed a very one-dimensional definition of "thick."

While each person of size has a right to choose the words they use to describe themselves, I personally associate words like "thick" with hyper-sexualization based on my own personal experiences. I prefer the word "fat" because of the community of support I have found through embracing that word, but I recognize that my experience with the word is not universal.

So is it cool to hear a celebrity praise something outside of society's beauty norms? Yes. But that does that mean that all fat bodies are now accepted equally by society. Certainly not.

It was that lyric and the problematic sentiment it represents to me that came to my head when I started looking through the #ThickGirlAppreciationDay posts. While I think it's super important that we celebrate bodies that fall outside of the accepted norm, it's also important that we aren't replicating the same aesthetic standards of the straight-size fashion and beauty industries, which praise the validity of certain bodies over others.

A day to celebrate women's bodies has the potential to be really great, but only if a few critical conditions are followed. Here's what I want to see from #ThickGirlAppreciationDay:

1. We Don't Argue About Who Qualifies As "Thick"

It didn't take me more than 10 tweets into the #ThickGirlAppreciationDay tag to find someone telling someone else that they weren't "thick enough" to participate. One argued that the tag was created to celebrate fat women, while the other argued she had thick thighs and that they were reason enough to participate. Here's the thing: Hashtags often start quickly with no defined rules. Since words like "thick" mean something different to everyone, it's just not productive to police participants who personally identify as "thick."

2. We Say Nice Things To Each Other

If we are gonna participate in a hashtag celebrating bodies, let's make sure we do just that. I want to see compliments only. And not insults thinly veiled as compliments. I don't want to see any negative body talk towards oneself or towards each other. This includes making over-arching statements from men criticizing the women posting. If you don't have anything nice to say, keep your Tweets to yourself.

3. We Don't Police What Women Can Wear In Their Posts

Fashion for many people is a form of creative expression and personal empowerment. Personal style is about choice and agency and no one else has any right to decide what someone chooses to put on their body, whether it's an oversized parka or a string bikini. They choose. Not you.

If what you see someone wearing makes you uncomfortable, that has something to do with your own feelings about yourself more than it does about what they are wearing. I saw one post in the tag that said women over 130 pounds can't wear crop tops or shorts, which made me want to Tweet back a million photos of my size 22 self thriving in shorts and crop tops.

4. We Keep The Definition Of Women Inclusive

Gender identity is something that is defined by individuals. While one's gender identity may be fluid, it is not open to the interpretation and opinion of others. And while I would prefer that the tag was #ThickPeopleAppreciationDay, if the word "girl" is in the tag, that needs to include anyone who identifies with feminine pronouns.

5. We Celebrate Bodies Of All Sizes And Shapes

A hashtag like #ThickGirlAppreciationDay has the potential to increase visibility for fat women, but only if women of ALL sizes are given a safe space to participate. Thus far, the women posting seem to fall on the smaller side of fat and most of them have hourglass figures. Unless we are creating visibility for women whose bodies are not proportionate, who have small boobs, who have stretch marks, who have scars, who have flat butts, who have bellies, who are short, who are not able-bodied, who are tall, who are above a size 18, we are not showing the full picture.

6. We Celebrate Women Who Are Not White

Equally disappointing to the lack of size diversity is the lack of racial diversity shown when searching the #ThickGirlAppreciationDay tag, which shows results based on popularity. I see a lot of white-passing women. I think fellow Bustle writer Amanda Richards put it best when she wrote, "It’s important for white members of the community to use our platforms to boost people in marginalized groups to the point where they’re getting seen and recognized." And while the mainstream visibility of someone like Tess Holliday is important, she shouldn't be the only representative we see. So if you are white and looking through the tagged photos, trying to favorite and RT posts from women who do not look like you will help to increase this visibility.

7. We Don't Apologize For Our Bodies

I think many people who live and work within the body positive community combat the idea every day that society still sees the word "fat" as synonymous with the word "ugly." That is just not true. It's a descriptor. And when I see women posting their #ThickGirlAppreciationDay posts, I want to see fat women who don't apologize for their bodies because they know there's nothing to hide or be sorry for.

My favorite #ThickGirlAppreciationDay post came from blogger The Fat Girl of Fashion whose caption said she didn't apologize for being thick. More posts like this would be a good start!

8. We See The Body From Multiple Angles

It shouldn't be a surprise that the #ThickGirlAppreciationDay tag features a plethora of booty pics. It's understandable but also really frustrating. While I respect every woman's right to post whatever pics she pleases, I want to see women celebrate their bodies from all angles, including those that we are told are supposedly "unflattering."

I am cautious of men participating in a space designed to celebrate women. This suspicion comes from my personal experience with some men's entitlement to make comments about my body while failing to realize that their comments are harassment are not compliments. My ideal #ThickGirlAppreciationDay would be women celebrating other women, so that the space would be safe for those of us whose histories make it difficult to feel safe when men's voices are heard loudest.

Is this all very idealistic? Yes. But it's still necessary to focus on creating safe spaces for all women to exist in. And while this hashtag may not be it, that doesn't mean the conversation isn't important.