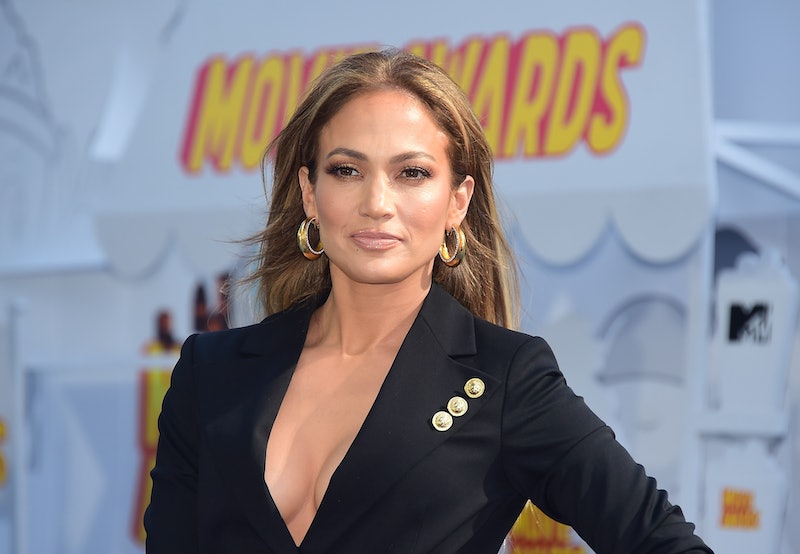 Oh, you think you're jaded? Maybe you are. But no one gives less of a you-know-what than Jennifer Lopez, whose reaction to being glitter-bombed at LAX by a clown named Richie the Barber made me love her even more than when she sang "Bidi Bidi Bom Bom" in Selena, if that's even possible. Apparently, this infamous clown has a reputation for terrorizing female celebrities by throwing confetti all over really expensive outfits that deserve better. He pulled a similar prank in 2014 by dumping confetti all over the heads of Khloe and Kourtney Kardashian, who, like J. Lo, also looked nonplussed about the sudden celebration.

Anyway, the Kardashians' calm faces are no comparison to J. Lo's cool demeanor. The American Idol star was born and raised in the Bronx and if anyone thinks she feels terrorized by a hair-cutting, clown-worshiping zealot, they don't know who they're dealing with. As she was led through the Los Angeles airport by her entourage, the Queen of Crop Tops was glitter-bombed and did not miss a beat — she flicked those sparkles off her shoulder, didn't even bother checking her rock-hard abs, upon which all glitter instantly bounces off, and carried on like the boss she is.

Of course, when it comes to perfecting the art of not giving a damn, J. Lo has had a lot of practice over the years. Allow me to share a few of her greatest moments in gifs.

There was that time she made it clear she can totally steal your BF, but doesn't want him.

The time a joke was made and she didn't get it, but she somehow managed to cover it up by showing how little she thought of the joke.

She's the kind of woman who delivers real talk when you need it most — complete with semi eye-roll to punctuate her point.

She eats whatever she damn well pleases and speaks while chewing because she it just doesn't matter when you're J. Lo.

Suffice it to say, someone didn't make it to Hollywood.

And she absolutely, positively, has no use for that tent you call a dress.