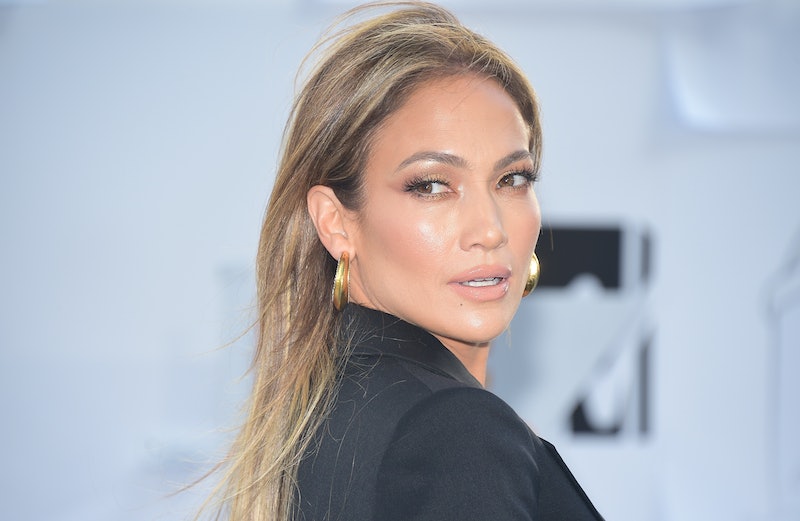 Jennifer Lopez has really been racking up the pitch perfect awards shows reactions lately: First, her impassioned agreement at the Oscars over Patricia Arquette's comments on wage equality, and now her good-natured befuddlement at Amy Schumer's dud of a Gone Girl joke at the 2015 MTV Movie Awards. If you missed it because you were too busy laughing at Schumer's mockery of Kevin Hart's prolific movie schedule — "Did you know if Kevin Hart sees his shadow we get six more Kevin Hart movies?" — the host led into talking about the nominated movies this year with a little summary of Gone Girl: "If you didn't see it, it's the story of what one crazed white woman, or all Latinas do ,if you cheat on them."

Unsurprisingly, that rather lazy attempt at humor was met with mostly silence and a little leftover laughter from the joke that preceded it, but Lopez stepped in with a reaction to save the day. It looked a little something like, "Who, this Latina? Watch yourself, Schumer." Lopez seemed to share her questioning hand gestures with someone else in the crowd and I'm really hoping it was with another woman as if to say, "I've never faked my own disappearance, eaten 1,600 Kit-Kats, framed my husband for murder — SPOILER ALERT — killed Neil Patrick Harris, and adopted a truly chic blonde bob all to trap my husband into a sociopathic marriage, have you?"

OK, technically, Lopez did once fake her own disappearance in Enough, but that was because she was running from an abusive husband to protect her child, and not because all Latina women go totally Gone Girl-level bonkers if a man cheats on them. Just look at that face... Jennifer Lopez doesn't have time for elaborate murder entrapment plans, and she definitely doesn't have time for cheaters. She'd just dump his ass.

J. Lo, thanks for making us laugh with you.