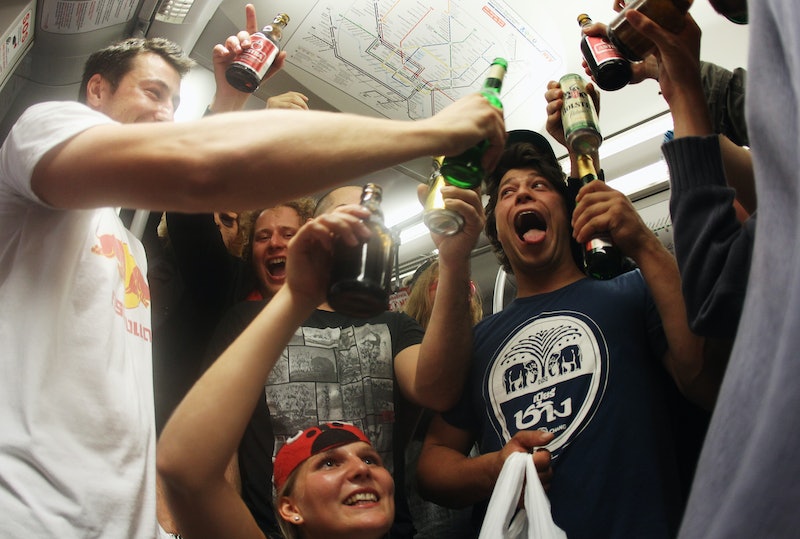 Do you have a habit of Facebooking and drinking? If yes, you might want to put your smartphone away before your next glass of wine: A new study from the University of Sydney, Australia, revealed that social media can skew drinking habits in either direction. The study found that young people binge drink more when they see the Facebook profiles of their hard-partying peers — but interestingly, people who are told that those profiles are often exaggerated also tend to cut their alcohol consumption by 50 percent.

Evidently, young people drink to keep up with what they perceive to be the amount of alcohol their friends consume — but access to social media profiles could be artificially skewing the facts. You know how sometimes it looks like all your friends are always having more fun than you on Facebook? It apparently also sometimes looks like everyone is getting #turnt way more than you — but in both cases, what you;'re seeing is probably an inaccurate representation of the facts. It turns out that people really don't want to drink that much; they only want to drink as much as their friends are drinking. So guess what happens when they're told that their friends aren't drinking all that much? You got it: They start drinking less, too.

This actually isn't the first time that the link between social media and alcohol consumption has been studied; in 2013, University of Wisconsin researchers found that actual drinking was strongly correlated with references to drinking on one's Facebook page. So let's take a look at how the new study fits into the whole thing, shall we?

The researchers studied 244 Australian college students, and sent personalized messages to students they identified as "risky" drinkers. The messages compared individual students' drinking habits to those of their peers, and pointed out that they may have incorrect perceptions and assumptions about their friends' drinking habits.

The students who were told that their perceptions of their friends' drinking habits might be inaccurate tended to cut down their alcohol consumption by 50 percent, from an average of 40 to an average of 20 drinks per month. That's quite a reduction!

All this really means is that we are incredibly susceptible to the influence of what we think our peers are doing based on assumptions we draw from social media. It's probably good to keep in mind, then, that oftentimes these assumptions are just dead wrong — and not just when it comes to drinking. We're our own worst enemies when it comes to FOMO, MOMO, and all those other social media-related acronyms. Remember what we learned from "Facebook Stalking My More Successful Friends": What you see is rarely, if ever, the full picture. Instead? You do you, because you're awesome all on your own.