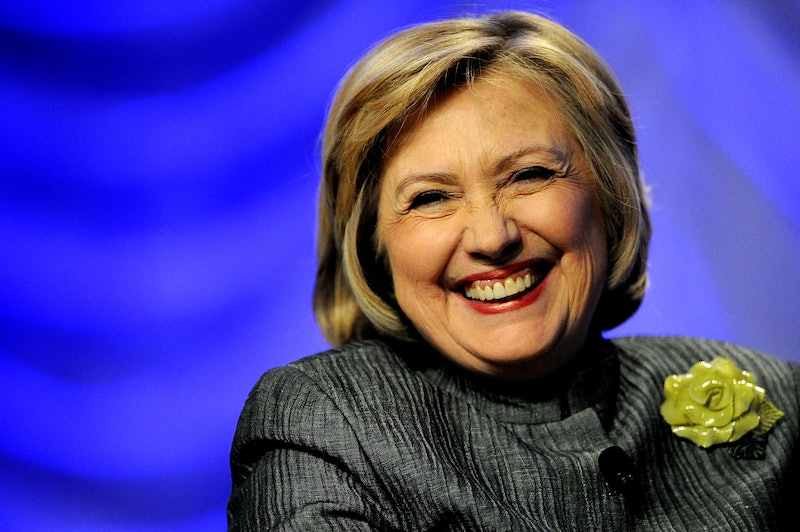 In case you weren’t yet psyched for the 2016 presidential election, Bluewater Productions is releasing a Hillary Clinton comic book about her campaign. Which is great news, because it means I don’t have to read the newspaper anymore (jk, jk, jk). This is the same company that turned Rand Paul into a comic book hero last month, so you just know it’s going to be great.

The newly released comic book, Hillary Clinton: The Road to the White House, won’t be taking any sides, as Bluewater Productions prefer not to reveal a political agenda. Instead, they focus on telling people’s stories in the best way they know how: in graphic novels.

The company has previously published a whole series of feminist biographies under the title Female Force, with subjects ranging from Princess Diana, Ellen DeGeneres, and Chelsea Handler. Clinton and Sarah Palin were actually the ladies who inspired the whole series in the first place; the company’s president, Darren Davis, was frustrated that the women "were being treated really unfairly in the press" during the 2008 presidential campaign, and hoped the comics would help get their stories heard. “You might not like [these women],” Davis told The New York Times, “but you have to respect them and their career.”

And what better way to show that respect than through an awesome comic book? I say hell yes.

The hype for Hillary Clinton’s presidential campaign is building fast. Earlier this month, Bill Clinton tweeted President Obama about his @POTUS Twitter handle (with the cheeky hashtag #askingforafriend), and my brain exploded. As one of our main chances to finally have a female president, Clinton has gained feminist Wonder Woman status — so it’s only fitting that this comic book is about to turn her into a (super)hero.

More like this
16 Novels That Paint A Realistic Portrait Of Abortion
By K.W. Colyard
Sparks Fly Fast & Furious In 'Honey & Spice'
By Bolu Babalola
Mrs. Wheeler Wore A Vagina Necklace In 'Stranger Things' Season 4
By Allie Fasanella
This Viral TikTok Trend is Exposing Everyday Scams
By Sophia Moore
Get Even More From Bustle — Sign Up For The Newsletter