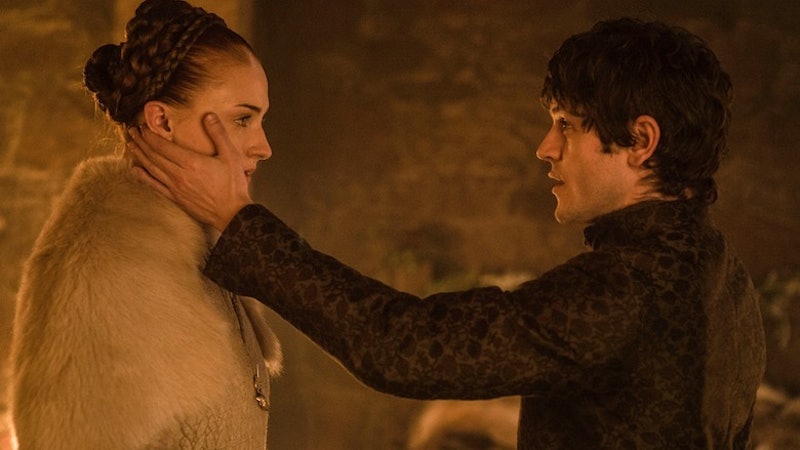 I'm not super happy with George R.R. Martin as of late, especially after his non-apology for that horrible rape scene a few weeks ago on Game Of Thrones. The fifth season of the HBO smash has seen a lot of shakeups and new alliances, some with the potential to be awesome (see: Tyrion and Daenerys) and some already incredibly awful: that's right, I'm talking about the ill-fated marriage between Sansa Stark and Ramsay Bolton (nee Snow), who have somehow found themselves the lord and lady of Winterfell. Obviously it's not Sansa's responsibility to get herself out of this horrific, oppressive and disgusting pickle, but are we really going to leave her escape to the men of Westeros? All they're good for is sticking it where it doesn't belong and cutting off heads, possibly at the same time.

Bustle's own Jennifer Still offered some scenarios that might afford Sansa freedom or at least a brief respite. She could head for the hills, which seems unlikely since winter is coming and Littlefinger, her one supposed ally at the moment, is MIA; she could wait for said unreliable Lord Baelish to come back and kill Ramsay and the rest of the repulsive Boltons. She could stick it out, acting complacent until she decides to strike, which sounds the most feasible but also the bleakest. Reek could somehow remember his roots and loyalties as Theon and help Sansa revolt, which doesn't seem likely for such a broken creature at this point.

Her options are incredibly limited, which makes it seem frustratingly likely that the only way out for Sansa is through. I was wrecked when she didn't go along with Brienne of Tarth, who attempted to save her, telling Sansa she swore a vow to Catelyn Stark to protect Sansa. But how can you blame the eldest Stark girl? She's suffered immensely and almost entirely alone, led along by the hand by a skeezebag with a little finger of a mustache. Her options, as I said, are limited, which is entirely George R.R. Martin's fault.

It looks like Sansa, barring murdering Ramsay and then doing... something after that to get away from Winterfell, doesn't have much of a choice but to only speak when spoken to. But I'm not sure how many more episodes I can stand to watch with her isolated in her tower, waiting in fear for Ramsay to return. And I definitely don't want to see anymore horrific rape scenes between the two of them. Obviously it would be a delicious moment were Sansa to murder Ramsay, perhaps colluding with Reek and burning on Bolton's meager testicles and feeding them to him without even a hint of salt, but how is that likely?

Blue sky thinking: Sansa could do the unthinkable and impregnate herself by that slippery sack of crap Ramsay, thereby at least buying herself some time. Were she a vessel for the heir of the Bolton fortune, which now, somehow, includes Winterfell, she would be at the very least, unkillable. Sansa Stark is her mother and father's daughter: She was moved by Lord Baelish's words when he told her to avenge them, and it seems like she will seek any modicum of strength she can muster in order to outlive Ramsay Bolton.

I just hope that her options become more expansive than put up, shut up, or get pregnant. Cersei said it and it rings true still: everywhere in the world they hurt little girls.