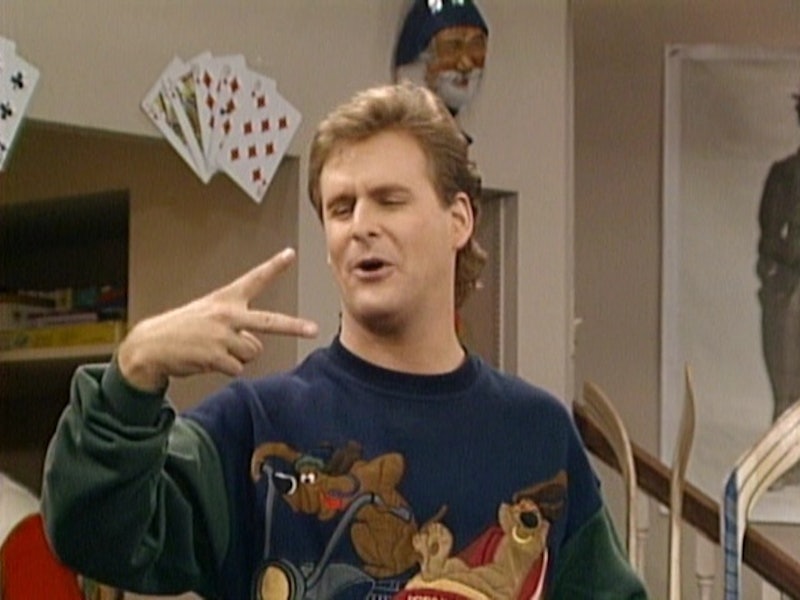 Though Full House boasted a few things that have stood the test of time since it first premiered — John Stamos, for instance — I'm pretty sure that Uncle Joey is the best. At first glance, it may seem that the aspiring comedian/friend to woodchuck puppets wouldn't be able to hack it in a time that birthed raunchy flicks like Ted, The Hangover, and pretty much anything Judd Apatow has made in the past five years, but think about it this way: This is a time when dad jokes are trendy, and that's exactly what Full House 's Uncle Joey excelled at comedically. Watching Uncle Joey's comedy routine during an episode of Full House was always thoroughly entertaining, but now, it'd probably be the stuff hipsters would covet. We really should rebrand all dad jokes as "Uncle Joey-isms" — woodchuck not necessary.

If you're a diehard Full House fan, you know that good ol' Joey has plenty of goofy tricks up his sleeve. I mean, have you heard him say "Cut. It. Out!" with a scissor hand motion? Have you heard his Popeye expression? What about Bugs Bunny? The dude knows how to thoroughly entertain the Tanner girls, but admit it — you probably laughed, too.

But what exactly makes up an Uncle Joey joke? There are very specific elements of it that can be broken down in a very scientific fashion — and as a diehard Full House fan, it's my duty to do so. Check it out: