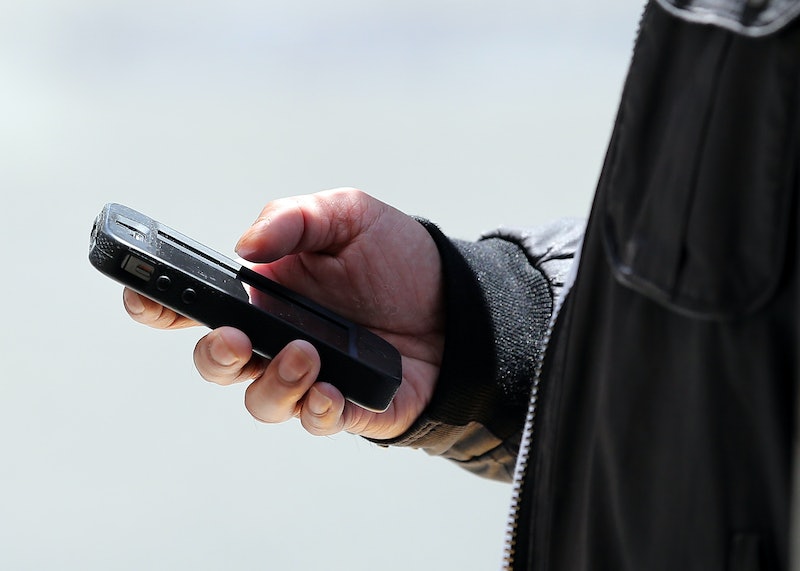 So here's a story that will make you want to burn Tinder right off your phone! Imagine if you're swiping on a dating app, minding your own beeswax, when a hottie with a body starts sending some very familiar pictures your way...and then you realize, "Oh, hey. That's me." Seems too crazy to be real, but that's exactly what happened to this guy who got catfished on with pictures of himself on Grindr. 18-year-old Jack Kennedy was scrolling through the app when he came upon the stranger, who appeared to have thoroughly combed through his social media presence to collect both the pictures and all of the stats that he put in his fake profile.

Jack, a photography student, is well-known on Tumblr for his photo sets, particularly the ones he has taken of himself. Perhaps it was the popularity of his online presence that led the catfisher to pick his photos in the first place, but whatever the inspiration, it sure led to some awkward catfishing fail gold. Jack took a screenshot of the eerie conversation he had and posted it to Tumblr page, where it is already causing quite a stir. Here is the conversation between Jack and not-so-Jack, with Jack in orange and the catfisher in blue:

In an e-mail to the Daily Dot, Jack explained he wrote "Mhm?" thinking that the catfisher had sent the photo of him along on purpose, to ask if the picture was him.

"They started sending more photos of me, and I was just sat in bed thinking 'OK, this guy has to be joking. There's no way this is happening.' Then he actually offered to send proof that it was him, and at this point I just couldn't stop laughing!" Jack told the Daily Dot. "I went on to ask him for his 'proof', which turned out to be a a photo of his (fortunately not mine) penis. After this I just closed the app and ignored him."

Immediately he reported the catfisher to the app, but it is under debate whether or not the user will get banned from Grindr, since they didn't actually use Jack's picture in their profile page.

"They attempted to replicate me in as many ways as they possibly could; it was insane. I suppose it gave me a little confidence boost, but at the same time I can’t help but worry about what these people are doing with my photos—what are their intentions? Are they using the Internet to target vulnerable people whilst masquerading as me?"

As funny as the encounter was, it serves as a cautionary tale to everyone: Catfishing is not only very real, but anything you post online could get exploited by someone who has access to it. This is just one among many catfishing incidents that have blown up in the past year, including that of "Leah Palmer," the still anonymous Facebook user to stole a woman's entire life online by using all of her pictures.

"I believe catfishing can make people very anxious and be a significant factor in the development of long-term trust issues," Jack added. "I’m not sure that people fully understand the consequences of their actions. The Internet is a wonderful and very powerful resource, and I believe it’s important that people understand that their actions online can have a serious effect on people’s lives."

Daily reminder that the internet is a scary black hole, guys!