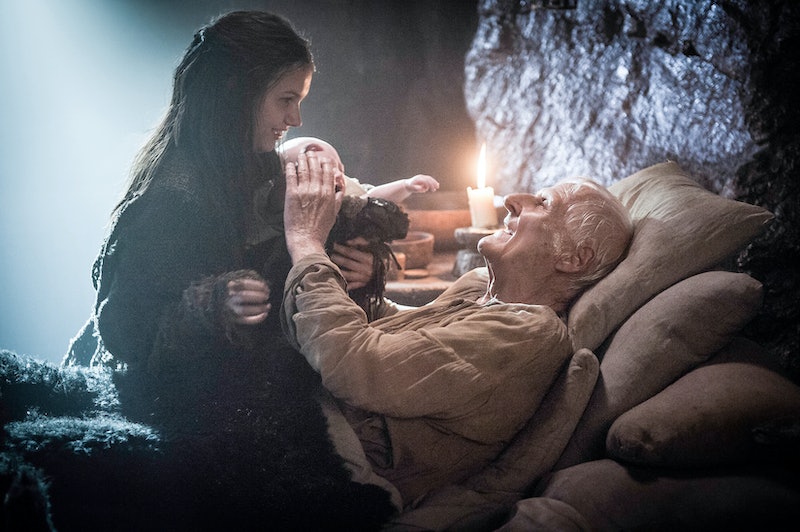 Last Sunday's episode of Game Of Thrones featured the most shocking death yet in the five seasons of HBO's bloody fantasy series: old Maester Aemon died of old age . That's probably the first time this particular cause of death has ever been encountered in Westeros, judging by the alarming rate the show's characters have been dropping dead from crossbows, poison, and sudden cases of sword-through-bowels. As he died, Aemon muttered vague warnings about getting Gilly's baby south and odd ramblings about his dead brother Aegon Targaryen. "Egg," he cried, referring to his brother's nickname. "I dreamed I was old." And so he passed, in what some considered yet another of Season 5's coded clues to Jon Snow's true parentage.

But, in the books, Aemon's death was even more drawn out. In A Feast For Crows, Jon Snow sends the the old Maester to Oldtown with Sam and Gilly, partially in hopes that the maesters there might be able to heal the ailing man, but mostly so Sam can begin his training to take Aemon's place. After a detour to Braavos, the trio hit the high seas... where the cold and damp quickly hasten Aemon's inevitable fate. On the page, the eldest remaining Targaryen's last words are even more revealing than his onscreen counterpart's... and he didn't even bother warning Sam about spoilers first.

In Feast, Aemon's dying words have less to do with possible coded references to Jon Snow, and a lot to do with another of the story's main protagonists:

"No one ever looked for a girl," he said. "It was a prince that was promised, not a princess. Rhaegar, I thought... What fools we were, who thought ourselves so wise! The error crept in from the translation. Dragons are neither male nor female, Barth saw the truth of that, but now one and now the other, as changeable as flame. The language misled us all for a thousand years. Daenerys is the one, born amidst salt and smoke. The dragons prove it." Just talking of her seemed to make him stronger. "I must go to her. I must."

Aemon's words here refer to the prophecy of Azor Ahai. This is a concept that non-book readers may be passingly familiar with through Melisandre and Stannis Baratheon, although George R.R. Martin's books undoubtedly go into much more depth on the subject. Azor Ahai was a legendary Westerosi hero who wielded a magic, burning sword named Lightbringer and helped defeat the Others during the Long Night five thousand years ago. Followers of R'hllor, the God of Light, believe that Azor Ahai will be reborn to lead the charge against the Others and their wights once again.

Melisandre believes she has found this Second Coming in Stannis Baratheon, but Maester Aemon isn't so sure:

"Lady Melisandre has misread the signs. Stannis... Stannis has some of the dragon blood in him, yes... I remembered that, so I allowed myself to hope... perhaps I wanted to... we all deceive ourselves, when we want to believe. Melisandre most of all, I think. The sword is wrong, she has to know that... light without heat... an empty glamor... the sword is wrong, and the false light can only lead us deeper into darkness, Sam. Daenerys is our hope. Tell them that, at the Citadel. Make them listen. They must send her a maester. Daenerys must be counseled, taught, protected."

While Stannis is distantly related to the Targaryens through his paternal grandmother, Aemon doesn't believe that's enough to make him Azor Ahai. It's his belief that Melisandre, instead of patiently waiting for the signs outlined in the prophecy, manufactured them to convince herself that Stannis was the correct choice. Azor Ahai is prophesied to be reborn amidst salt (the nearby shores of Dragonstone) and smoke (the fires of the idols Melisandre was burning when we first met her) and that he will wield a magic sword (which the Red Priestess made by plunging Stannis's weapon into one of the burning idols).

When Stannis and Melisandre visit the Wall in A Storm Of Swords, everyone present is dazzled by the King's flaming sword. Blind Maester Aemon alone notices that the sword gives off no heat — it's just another of Melisandre's tricks and not the real Lightbringer. If Aemon is correct that the ancient word for "dragon" was truly gender neutral, then Daenerys could easily be "the Princess that was Promised" while everyone was busy looking for a "Prince."

Assuming that these aren't just the scattered rantings of a dying man, then Melisandre is due for a rude awakening sometime soon. With Stannis' future looking less and less certain, the Red Priestess may soon find herself without a savior... But will she turn to Daenerys, per Aemon's suggestion? Or will she find a closer target for her prophecy? A popular fan theory holds that both Melisandre and Aemon are wrong — that neither Stannis nor Dany are Azor Ahai, but that Jon Snow is the Prince That Was Promised. (This is due to events from A Dance With Dragons that haven't yet happened on the show. I won't spoil them here, but if you want to read up on the theory, be my guest.)

Either way, it's looking unlikely that Stannis will become the rousing hero Melisandre is clearly hoping for, that her allegiance will shift to either Dany or Jon, and that either (or both?) will lead the fight for R'hllor against the armies of the Great Other. And you can thank doddering old Maester Aemon for that massive spoiler.