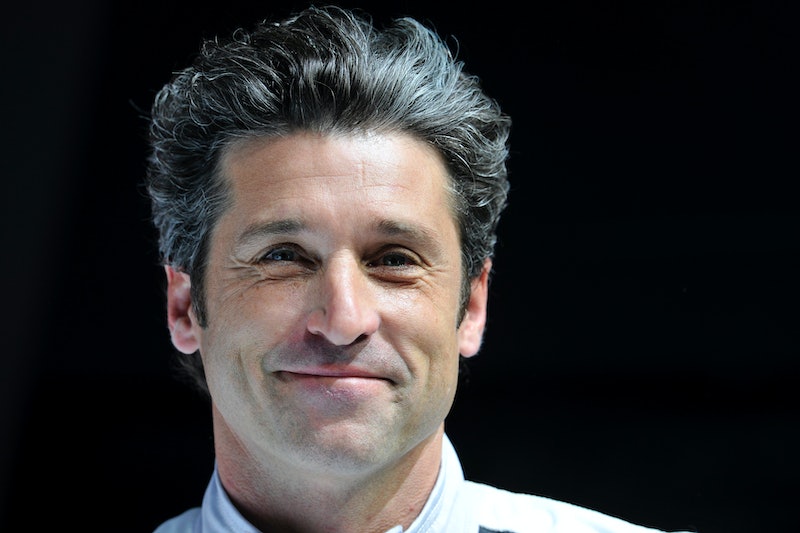 For Grey's Anatomy fans, the grief surrounding the sudden and tragic loss of Dr. Derek Shepherd, from ABC's medical soap, may very well still be fresh. And yet McDreamy himself, Patrick Dempsey, is already prepping for his return to primetime television, if a report by Entertainment Weekly is to be believed. According to the website, a "high-level studio exec" claims that Dempsey is sitting down with studio heads and casting directors, searching for his next project.

"It's very normal for an actor who has been on a show for a long time to take meetings, to get reacquainted with other studios and network execs," this anonymous source said. "It's just what you do. You never know when that dream project is gonna fall in your lap." Another anonymous source confirmed that it's not too late for Dempsey to join a new or returning show this fall. "Not too late at all. I can definitely see him ending up on something in the fall," the source, a casting exec, told the website.

Whether or not those rumors hold any merit, the reality is that it's looking like Dempsey will be back on our TV screens sooner than we thought. So which of Fall 2015's new and returning shows would McDreamy be perfect for? Let the speculation begin.

If Dempsey wanted to completely distance himself from his Grey's days, he would go in the totally opposite direction from that hour-long medical soap and take a role in a half-hour slapstick comedy, like this new CBS sitcom starring Jane Lynch (Glee) as an unconventional guardian angel. Who could Dempsey play? Well, every guardian angel needs a devil on the other shoulder for balance, right? Dempsey's handsome, silver-tongued devil would be the perfect counterpoint to Lynch's brash, sharp-tongued angel.

Who wouldn't want to get in on broadcast television's biggest new hit? Adding another big name to its already big cast would be an incredible coup for the FOX hip hop drama. A role on Empire could allow Dempsey to combine his loves of acting and racing: he could play a world-famous race car driver who's a shareholder in Lucious' company. His character's high-rolling lifestyle would fit right in with the big boats and designer clothes of the Lyon clan.

Throughout its first season, this unusual musical fantasy adventure comedy featured plenty of high-profile guest stars, including John Stamos, Ricky Gervais, Rutger Hauer, and Weird Al. Stamos was particularly memorable in a role that played up the actor's infamously handsome face. It could do well for Dempsey to leaven some of the gossip surrounding him with a self-effacing parody of himself that simultaneously sends up his "dreamy" persona while showing off his comedic chops. And we'd get to hear him sing!

Rob Lowe (Parks And Recreation, The West Wing) stars on this FOX sitcom as Dean Sanderson, a former TV star who, after his long-running show ends, decides to try his hand at the job he'd pretended to be good at for so many years: being a lawyer. This is a perfect set-up for Dempsey to join the cast in a similarly satirical role: as a Hollywood acquaintance of Dean's who recently ended his run on a medical soap and is inspired by his friend to actually become a doctor.

As recently as last week, NBC was still adding cast members to the reboot of their beloved (and then reviled) superhero drama. How cool would it be to see McDreamy with superpowers? Maybe he could manipulate gravity. Or liquefy himself. Or heal people (natch). Or be really, really handsome no matter how old he gets.

Jane The Virgin (The CW)

With a face tailor-made for soap operas, Dempsey would fit right into The CW's critically-acclaimed telenovela. In true telenovela fashion, he could play a new, older love interest for Jane. He could be Jane's handsome grad school professor (assuming she gets in). He could be a detective colleague of Michael's who helps Jane hunt down Sin Rostro and her kidnapped baby. He could even be one of Sin Rostro's henchman who worms his way into Jane's life with his killer smile and luscious locks.

This Western riff on the dearly departed Dallas revolves around Chace Crawford's (Gossip Girl) character, who arrives in North Dakota to strike it rich drilling for oil. The town is already ruled by an oil tycoon, Hap Briggs, played by Don Johnson (Miami Vice), and I'd love to see Dempsey recur as Hap's chief competition and arch-nemesis. It's easy to imagine the Grey's star fitting right into this show's rural setting as an oily-haired business maven — and watching these two TV icons go toe-to-toe each week would be reason enough to tune in.

It seems like every actor in Hollywood is getting on board the comic book train (just yesterday it was announced that Tilda Swinton is in talks to join Marvel's Doctor Strange ), so a role on CBS's highly-anticipated Supergirl would simply be the next logical step in Dempsey's career. After all, they haven't yet cast a husband for Calista Flockhart's media mogul Cat Grant. It would be great to see Dempsey go from the man of everyone's dreams to the man of everyone's nightmares. That's right — it's time for McDreamy to go full villain. CBS should cast him as Grant's husband who's outwardly supportive at home... and secretly plotting to kill Supergirl and destroy National City from his secret lair full of evil gadgets and expensive hair products.

More like this
Ellen Pompeo Is Stepping Back From 'Grey Anatomy' For More Than Half Of Season 19
By Brad Witter and Sophia Moore
Neil Patrick Harris & David Burtka’s Relationship Status Is Far From ‘Uncoupled’
By Jake Viswanath
On 'Industry,' Marisa Abela Takes Control
By Morgan Leigh Davies
Jane Lynch Revealed Why She’s Leaving 'Funny Girl' After Lea Michele Was Cast
By Grace Wehniainen
Get Even More From Bustle — Sign Up For The Newsletter