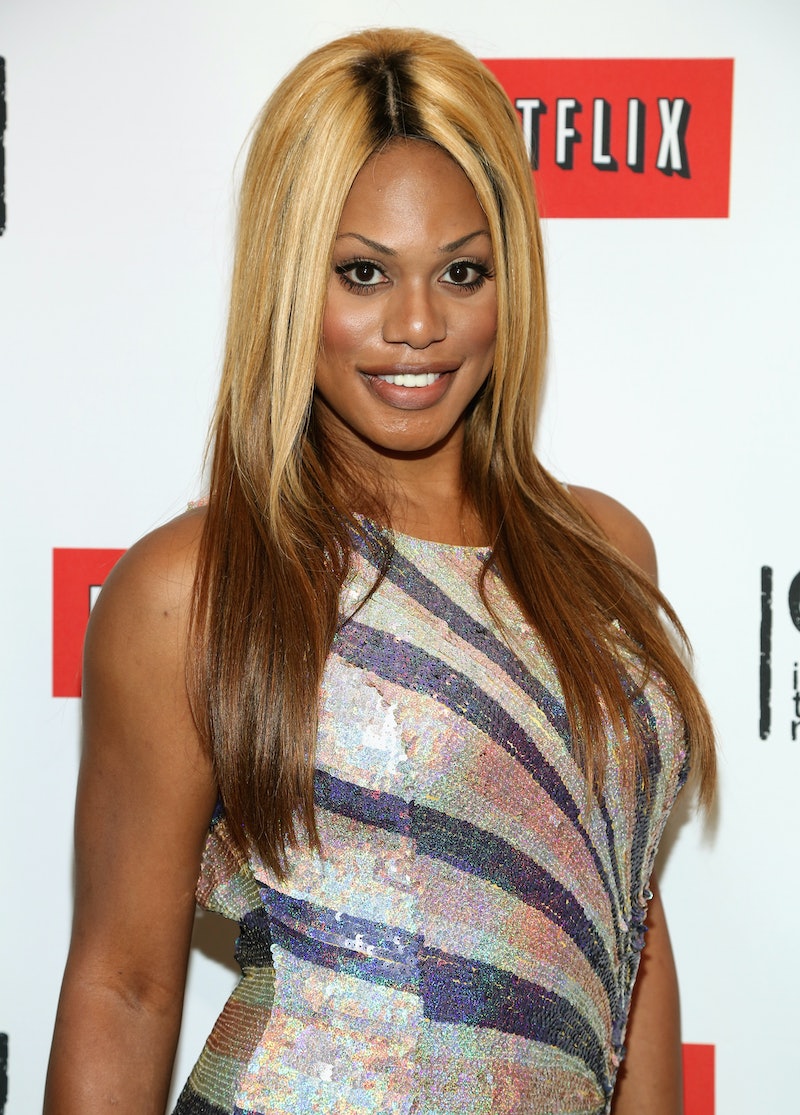 With all the recent focus on Julianne Hough dressing in blackface as a character and main cast member Laura Prepon barely appearing in Season 2, it's easy to forget that Orange is the New Black — the show, not the headlines — is actually pretty phenomenal. The Netflix dramedy about inmates at a women's prison, based on Piper Kerman's 2010 memoir, received rave reviews upon its premiere last July, and is expected to win all the trophies come next year's Emmy Awards. The show has received acclaim for everything from its witty one-liners to its creative use of maxi pads, and a large portion of the praise has been for the performances of its crazy-talented, refreshingly diverse ensemble.

Of the many cast members that have won critics' attention over the course of OITNB's first season, one of the most prominent is Laverne Cox, who plays Sophia, a transgender woman serving time for credit card fraud. Thanks in large part to Cox's compelling portrayal, Sophia quickly became one of the most fascinating characters on the show. And with realistic, rarely-discussed-on-TV storylines about her transition and its effects, Sophia — and Cox — have become symbolic of the series' commitment to breaking barriers.

Last week, Bustle talked to Cox, just days after she spoke at Emerson College for Transgender Awareness Week, about the show's huge success and being a transgender actress in Hollywood.

ON BEING AN ACTIVIST

As one of the few transgender actors in Hollywood, Cox doesn't take her success lightly. She knows that with every role she gets, she's opening doors for other trans actors and individuals who rarely get to see members of their own community on-screen. Since 2011, Cox has written blog posts for The Huffington Post about everything from bullying to Miss Universe, and currently, she is touring the country speaking to colleges and universities for Transgender Awareness Week.

"When I talk, I tell my story ... of always being a creative person, and being feminine as a kid, and how I navigated and came into myself and my womanhood ... It was just really exciting to be in that atmosphere [at Emerson], and also to think about all they’ve been able to do to make the environment there so supportive and safe for LGBTQ students, and how that can be replicated around the country... It's a model for other places."

ON GROWING UP TRANSGENDER

Cox grew up in Mobile, Ala., where she attended a Birmingham fine arts high school. Later, she enrolled in Indiana University before transferring to Marymount Manhattan College.

"As a kid, I didn't have the term [transgender]. I thought I was a girl ... certain things happened when I was a kid that made me think I needed to push that down, and I was in denial about the girl thing. I didn’t think it was safe, or possible, or that I would be accepted. It was something I pushed down until I was able to find a supportive environment to finally accept myself."

"I was bullied a lot, mostly in grade school and junior high. I was bullied every day, called gay slurs ... it was really hard for me. Kids would beat me up every day. I went to an arts school for high school, and it really got better there. And then it got even better when I got to college ... The good thing about being in New York was that I got to meet people who were more like me, and who had similar experiences and were also trans, and that was transformative for me."

"My brother has been completely accepting of me the entire time, and he has a lot of trans friends himself ... it was never an issue for him. For my mom, though, it was more difficult and more challenging, but I’m happy to report today that my mother and I are in a good place."

Before Orange is the New Black, Cox made a name for herself as a reality star. In 2008, she competed on Season 1 of I Want to Work for Diddy, a VH1 competition series with the prize of being Sean Combs' personal assistant. The same year, she appeared in two episodes of Law & Order, and a few months later, on Bored to Death. Her breakthrough role came in 2010, when she starred in and produced VH1's TRANSform Me. While the series, which featured female contestants getting makeovers by transgender stylists, only lasted one season, it had enormous cultural impact. Cox became the first African-American transgender person to produce and star in her own show, and TRANSform Me was nominated for a GLAAD Award.

"After Diddy, I’d been approached about doing my own show. We had this idea for TRANSform Me, this makeover show, and when we pitched it to the network, they loved it ... I was working with some great people, and the show wouldn't have been possible about them. I've been very lucky."

ON BEING TRANSGENDER IN HOLLYWOOD

Cox is one of the few transgender actors finding success in Hollywood, due to the industry's lack of roles written for trans individuals. In 2012, not a single one of the 101 movies released by studios contained a transgender character, and on television, the statistics are only slightly better.

"I love acting, and I've just never given up. I’ve been told 'no' a lot over the years by many different casting directors and agents. But I met my agent about six years ago, and he saw something in me that I didn’t fully see in myself at the time ... Being trans and black, there’s just not a lot of roles that are written for us. So I’ve worked hard to make my own opportunities and to take initiative around my career. But it’s been hard, it’s been challenging."

ON GETTING ORANGE IS THE NEW BLACK

In August 2012, casting for Orange is the New Black, the highly anticipated TV adaptation of Kerman's bestselling memoir, began. Cox quickly won the role of Sophia.

"There was just one audition. They put me on tape, and they liked it. I was told that they were very excited about me, and I got the part. I knew that it was recurring, but I didn’t know how big or small the role would be, but when I found out, I was really excited about that, that we would really get to know Sophia and her backstory."

ON THE SHOW'S SUCCESS

Since the show's premiere, Orange is the New Black has received nearly unanimous critical praise. It immediately became the summer's most talked-about show, and months later, is still being touted as one of the best series of 2013. While Netflix doesn't have typical TV ratings, it's said that OITNB attracted more viewers than several other of the platform's shows, like House of Cards or Arrested Development.

"It's so fascinating to read people’s opinions about and reactions to the show. The episode that got so many of them to come on board and realize that this show was different from other shows was episode three [where Sophia's backstory is shown in flashbacks]. I’m really proud of that. Shooting that episode was life-changing and life-affirming for me, just so many dreams come true ... I got to have all these acting moments I’d dreamed about happening."

ON DEALING WITH FANS

Due to the show's enormous success, Cox and the rest of the ensemble have become instantly recognizable.

"I'm trying to maintain a sense of normalcy. People sort of elevate me because I’m on the show, but I’m trying to stay humble ... I don’t always want to be that girl from TV. I’m super grateful, but I know it’s so important to maintain a sense of being an everyday person. So I’m just trying to navigate and negotiate that. I’m happy when they see me on the street, but the big thing — to be super candid — is to not be co-dependent with the fans. I’m trying to find a balance where I’m taking care of the fans, but also taking care of myself."

One only needs to look at Twitter to see the OITNB cast's love for each other. Whether tweeting jokes or hanging out at award shows, the ensemble truly seems to get along, and Cox swears it's the truth.

"It’s a great environment on-set, and I think that’s due to Jenji [Kohan, the show's creator] and the rest. They do such a great job of taking care of us and making us feel heard and loved."

While no release date is set, Season 2 of OITNB is underway. Filming began in August, and although most storylines are being kept under wraps, some secrets have been revealed, the biggest being the return of Pennsatucky, who viewers last saw getting a well-deserved pummeling by Piper.

"Yesterday, there was a scene playing, and I was like, 'Oh my god!' It was just like, okay, we're going there, we're just fully going there. It's so good. The new characters are just gonna blow your mind. Some situations, you’re just gonna… wow. I’m thinking of some plotlines and I just wish I could talk about it! ... We see some sides to Sophia we didn’t get to see in the first season, and I’m having a lot of fun."

Cox has completed work on several films, including Musical Chairs, a 2011 movie first released in 2012. In August, she won Best Supporting Actress at the Massachusetts Independent Film Festival for her role in the film.

"Musical Chairs is going to be available on HBO On Demand Nov. 16. So look out for that... It’s a feel-good movie about love and dance, about wheelchair ballroom dancing. It’s just pretty awesome."

ON THE SHOW'S IMPACT

Orange is the New Black has made huge leaps for the visibility of people of color and members of the LGBT community, thanks to its diverse cast and issue-driven plots. With storylines ranging from Sophia's complex relationship with her wife to several black characters' hilariously spot-on critique of white culture, OITNB, after just one short season, has already proven itself to be one of television's most progressive shows.

"I hope our show kills that conventional wisdom in the industry that you can’t have multiple women of color and trans people being played by trans actors on TV. Ultimately, I hope that there’s more trans characters. There’s really just not a lot. There’s maybe Unique on Glee, and me ... [But] it’s not just enough to have people of color and trans people on TV. It’s about having the characters written in ways that are multi-dimensional, that fully humanize them. That’s what I’m hoping to see more of, and I hope Orange is the New Black inspires other networks and other creatives in the business to make that happen."