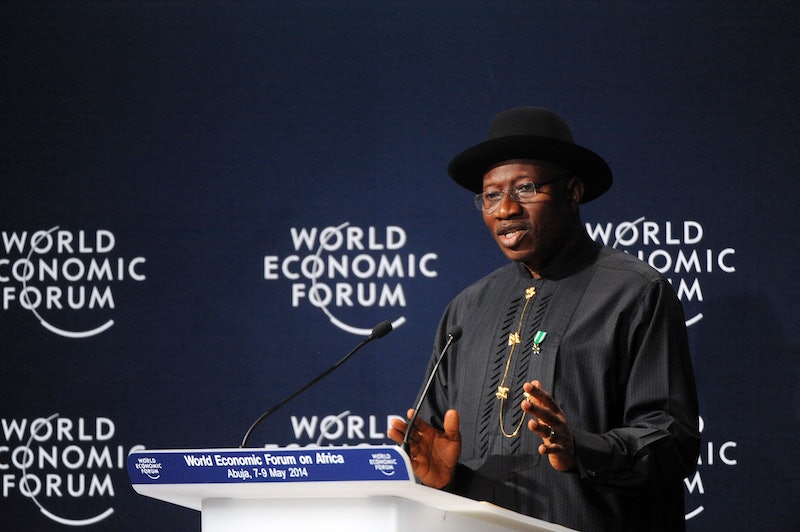 After a decade of campaigning by advocates, Goodluck Jonathan, the Nigerian president, signed a bill banning female genital mutilation (FGM), or female genital cutting, this week. Nigerian women's rights groups have been working to outlaw FGM, which removes all or part of a girl's genitalia, for decades. They say the procedure often takes place at a very young age, when girls don't have the knowledge to consent, and that it can lead to severe health problems. The new ban will be a small step toward protecting and empowering Nigerian women.

About 25 percent of Nigerian women ages 15 to 49 have undergone the procedure, according to UNICEF data. Nigeria is Africa's most populous country, so that percentage translates to 19.9 million women in Nigeria having undergone FGM, according to the International Business Times. Reasons for FGM vary by country and group, according to BuzzFeed, but it is often used to mark a girl as being ready for marriage. Other reasons include controlling a woman's sexual appetite, providing "aesthetic appeal" in societies where the external female genitals are considered "unsightly," and misguided notions such as the idea that FGM enhances fertility and promotes child survival, according to UNICEF.

Stella Mukasa, the director of gender, violence, and rights at the International Center for Research on Women, wrote in an op-ed for The Guardian that legal safeguards are only the first step toward ending FGM and other violence against women:

While legal safeguards are an important step towards ending FGM, they are not enough to eliminate it. Ending violence against women and girls requires investment, not just laws written in statute books. This is why we must emphasize community engagement, with a view towards shifting social norms, as a critical component of the eradication of FGM.

There are a slew of horrible effects associated with FGM — both health-related and social. According to the World Health Organization, immediate health complications can include severe pain, shock, hemorrhage (bleeding), tetanus or sepsis (bacterial infection), urine retention, open sores in the genital region, and injury to nearby genital tissue. Longterm consequences are recurring bladder and urinary tract infections, cysts, infertility, complications during childbirth, and newborn deaths.

In her Guardian column, Mukasa wrote that in parts of Africa where medicine and antibiotics are unavailable, many women don't even make it through the procedure. She said that an estimated 1/3 of girls who undergo FGM in certain areas of Sudan will die.

Further, condoning a practice that harms young girls and women under the guise of religion and rituals only allows for other abuses to be easily justified. Dr. Ashenafi Moges, who conducts research on FGM, wrote a paper exploring cultural justifications for the practice. He found that social customs and cultural fears often force women to continue the tradition:

Proponents of Nigeria's ban on FGM are hoping that it will send a strong signal to surrounding countries. J. Peter Pham, the director of the Africa Center at the Atlantic Council, told IB Times that "bucking norms" isn't an easy thing to do in certain African nations. So when legislation like this actually does pass, there's great hope that it will spread. He said this ban would criminalize a large percentage of FGM across Africa, since much of it takes place in Nigeria:

Nigeria, just because of the sheer size of its population, has one of the highest absolute number of cases of FGM in the world. One cannot overestimate the impact of any decision by Nigeria (on the continent).

But a ban isn't enough, and Mukasa emphasized that in her Guardian column. She said FGM stands for a general history of ritualized violence against women, and in order to actually stop it, we have to start with education:

Change will not happen overnight. Investing in research is key to developing effective, sustainable, and evidence-based solutions. Harmful practices such as FGM not only affect women and girls, but are also a major impediment to global development efforts to end poverty.

FGM is tied into a greater web of women's health and welfare problems in developing nations, so seeing that it ends and that women who have undergone it can seek help will be crucial. Proponents of Nigeria's bill said carrying out enforcement and punishment without scaring away FGM survivors will be a delicate balancing act. For many women in Africa, Moges found that FGM is simply a necessary part of life:

... In societies where illiteracy and poverty prevail, where women believe that FGM is universal, where the social pressure is tight, the justifications for FGM are the reality of life for the women in FGM practicing countries.