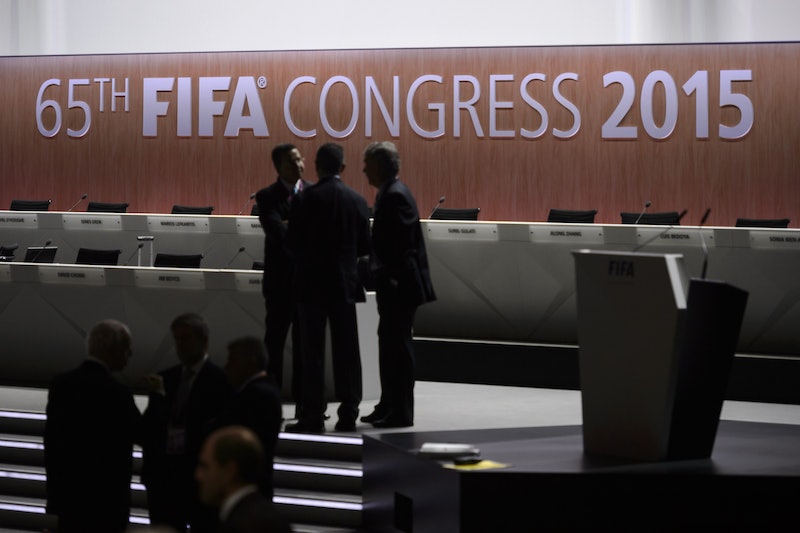 As if they didn’t already have enough problems — in the midst of a far-reaching corruption investigation and a crisis of confidence in the leadership — the FIFA congress in Zurich received a bomb threat Friday. Swiss police confirmed the threat, according to The Guardian, and media and delegates were moved out of the main congress hall. German news outlet Handelszeitung initially reported the news, at around noon GMT. Authorities were told of the threat at around 11 a.m., police spokesman Marco Cortesi told RT, while FIFA also acknowledged receipt of the threat. The intimation of violence came as FIFA’s 65th Congress got into full swing, with delegates expected to vote in a controversial presidential election.

Initial reports from media representatives at the conference indicated that though delegates had been evacuated from the main congress hall (during their lunch break), media were allowed to remain in a separate working room. This despite the fact that a police official had stated, “We can confirm the receipt of a bomb threat.” Then, within minutes of the threat being widely reported, an announcement was made declaring that the congress would shortly reconvene. Police with sniffer dogs had searched the area in the interim, Yahoo reported. Clearly, the threat was deemed simply that — a threat, and nothing more. “Congress can now continue, thank you for your patience,” FIFA general secretary Jerome Valcke said.

The flurry of emergency activity may have come to nothing, but at the current time, it doesn’t seem such a stretch to imagine that someone might be eager to bomb FIFA. Long suspected of corrupt dealings, football’s governing body looks set to finally face the kind of sustained scrutiny it has long managed to dodge. On Wednesday, what The Guardian termed an “unprecedented crisis” for the organization began in earnest, with nine senior FIFA officials arrested. Loretta Lynch, the U.S. attorney general, confirmed Wednesday that the charges include racketeering, wire fraud, and money laundering.

The arrests came after a long-running FBI investigation, while a probe by Swiss authorities was simultaneously launched into the awarding of the 2018 and 2022 World Cups — to Russia and Qatar, respectively. The charges against the FIFA officials, if proven, could result in 20 years of prison for each of them. Among those arrested were former FIFA vice-president Jack Warner and current FIFA vice-president Jeffrey Webb. It emerged Friday that the UK’s Serious Fraud Office was also getting involved, assessing “material in its possession” that related to the corruption probe.

Sepp Blatter, FIFA’s nimble and long-standing president, was not indicted, and officials declined to comment on whether he would be investigated. But Blatter faced calls to resign in the aftermath of the arrests, which he has ignored. Instead, a presidential election was set to take place during Friday’s congress, with Blatter expected to sweep to victory and claim a fifth term. The prospect of Blatter, heavily compromised by the corruption scandal in the eyes of many, leading the organization for another four years has earned stinging rebukes from politicians and representatives of football’s leading bodies.

And that’s only one reason why the FIFA congress Friday is controversial. Another hot topic on the delegate’s agenda is the potential suspension of Israel from the organization. The Palestinian Football Association has called for the suspension, in the light of Israel’s refusal to suspend certain Israeli teams that are based in illegal Israeli settlements. Israeli Prime Minister Binyamin Netanyahu said Thursday that if Israel is suspended “it would be a blatant politicization of sport and the result will be FIFA’s collapse.” Pro-Palestinian protesters set themselves up outside the congress venue Friday. Reports of a deal reached between the two delegations prior to the vote were refuted by a Guardian correspondent.

Ah, FIFA. If it weren't mired in controversy, it would be barely recognizable.