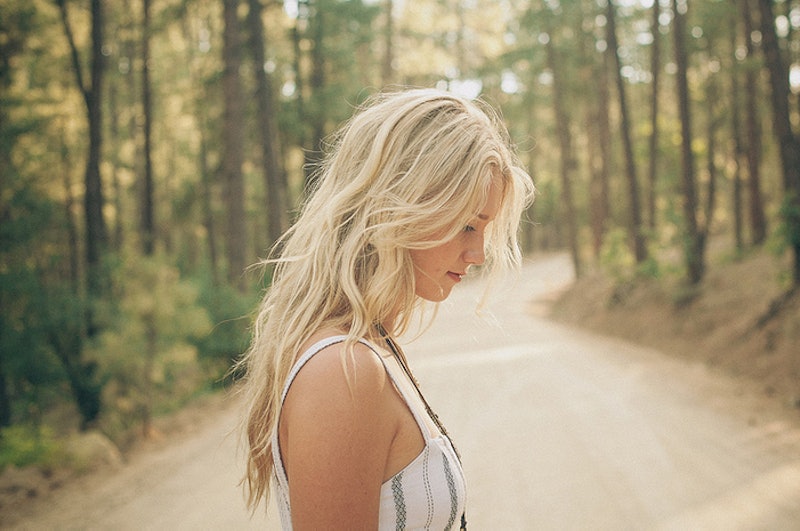 We talk a lot about what it does and doesn't mean to be a grown-ass person. "Grown-ass" more or less means...with it. Together. Someone who is fully themselves. And why wouldn't we obsess over this identity? The digital age is born of the generation that's at the peak of their becoming. We're asking the questions people have always had, but this time, we're doing it out loud, and we're giving each other answers.

The modern grown-ass woman is very little like her subservient, idealistic past generation self. To be a grown up no longer necessarily means to be a wife, or mom, or pretty girl in a dress (although you can certainly be any or all of those things in addition to being a grown-ass woman). It means that you're someone who knows what you want, how to ask for it, and how to take care of yourself; To be confident about the things you know for sure, and honest about what you're not confident about yet. It means to seek real love when you want it, and not-so-real love when you want that, too. It's about becoming who you've always wanted to be, and meeting who you've always been halfway there.

Here, the things grown-ass women do to take care of themselves in the process:

They take time to do nothing

Even if it's only 10 minutes in the shower, to just stand and breathe. They know the absolute importance of just letting themselves be. More importantly (once their essential responsibilities are taken care of) they can appreciate the subtle but profound ability to just kick back and watch a movie and not think about anything else. In this day in age, that's all but an art form.

They dress in a way that makes them feel comfortable and confident, no matter what that looks like

They let go of the idea of rotating between sartorial choices that are defined by being "stylish" or "flattering" and focus more on striving to feel comfortable and confident each day. It's not to say they're insusceptible or beyond body image issues (who is?) or that they don't enjoy fashion, but it is to say that they can view it objectively enough that they're making steps toward improving how they see themselves, one radical not-giving-a-shit moment at a time.

They spend time talking, connecting to other people

With friends, family, or their moms on the phone. They know the importance of connecting to a person, not just a screen.

They take time to be alone

Even if it's only the few minutes, they can lay with their eyes closed before bed (though it's ideally much more than that) they know that they ultimately don't exist just to entertain people all hours of the day. If they have kids, they call babysitters or willing friends when they can. Whatever it takes for them to do it, they plan "me" time, and stick to it.

Even if it's just a quote they've saved or something that inspires them or a quick passage from a favorite book, they take time to engage their minds as much as they do their bodies.

They walk, even if it's only for a block or two, or eat outside when they can. They know how important it is to get sunshine and fresh air, and that people weren't meant to exist under artificially lit structures all the time.

They cook at least one meal each day

They care for their space

They cleanse it or cultivate it in a way that's relaxing and inspiring. Taking care of what surrounds them is equatable to taking care of themselves. They keep themselves in a space that reflects who they are, and in which they feel in place.

... And they know that if they can't stop engaging, there's something for them to learn.

Because they don't skimp on the essentials.

They don't allow themselves to become passive

Disengaging with life is really the only way to fail at it, and grown-ass women know this. It doesn't matter what the situation is, as the saying goes, sometimes you win, and all the time, you learn. (Ok – I edited a little, but the sentiment stands.)

They choose their thoughts

And change them when they realize they haven't chosen them.

They find something to be grateful for

Even if it's that 15 minutes alone they got. Grown women realize that life is not about what you have or what you do so much as it's about your perspective of those things. Your gratitude grows in proportion to your decision to choose it, not in things to convince yourself you should be grateful for.

They determine the purpose of things

Even when work is frustrating, they find it within themselves to be grateful they have a job. Even when they're exhausted and they don't feel like traveling to their significant other's great aunt's birthday party, they're grateful they have a significant other with an annoying great aunt in the first place. Doing this is an exercise in complete serenity: it's acknowledging that even the difficult things, ultimately, are chosen with purpose (and if they aren't, stop choosing them...)

They prioritize their goals over their comfort

They're not so susceptible to the little highs that they forget the greater current through which they can exist. Grown ass women, while not superhumanly transcendent of cravings and desires and the like, still know when and how to prioritize what matters over what, momentarily, feels good.