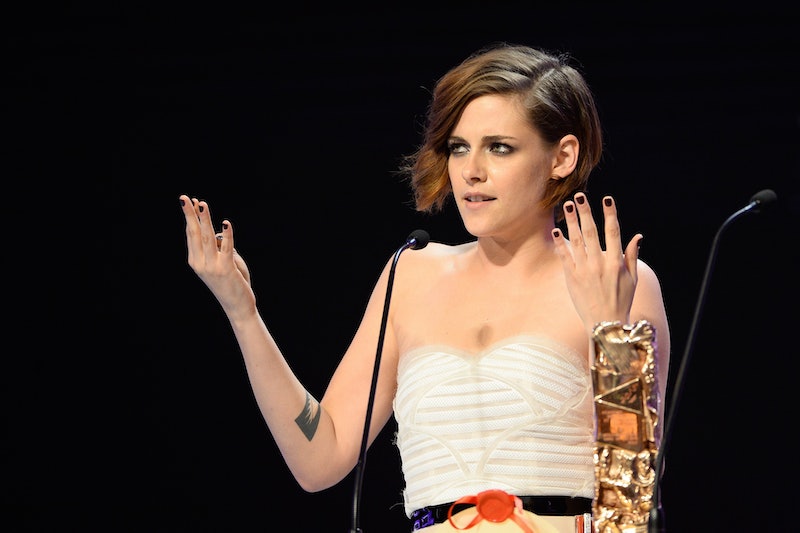 Kristen Stewart. I used to really wonder what she was doing in the Hollywood business since she seemed so averse to mega fame — as evidenced by her ever-awkward live interviews — but then I realized that was stupid, because who am I to say how someone should deal with the paparazzi? I won't even answer my phone if I don't recognize the number or if I see it's my mom and I'm just too anxious to talk to her. The 25-year-old actress who's best known for playing Bella Swan in The Twilight Saga has been the victim of the paparazzi for all her years in Hollywood — maybe even more so because vindictive photographers know she hates them and just want to push her buttons, but that's just speculation. Either way, Kristen Stewart isn't afraid to let the paparazzi know how she feels.

Besides being open in interviews about just how much she loathes the paparazzi that follow her around — like when she told Elle that she refuses to smile for them because then people would just give her crap for selling out — she also expresses herself without fear to the photographers themselves. And sometimes, actions speak louder than words. Here are six times that K. Stew flipped off the paparazzi, and I loved her for it.

Always time for a quick "eff you" hanging out the passenger's side.

Working on those finger and frown muscles.

4. In A Themed Outfit

The Polaroid shirt is a nice touch for someone who doesn't want her photo taken. She's good at irony.

In an Uber? A cab? Her mom's backseat? She says "go to hell" from there, too.

How Juliet Capulet of her!

Here, K. Stew, Robert Pattinson, and Taylor Lautner, in a vintage Twilight era paparazzi video, get fed up before they head into the sky. Bon voyage!