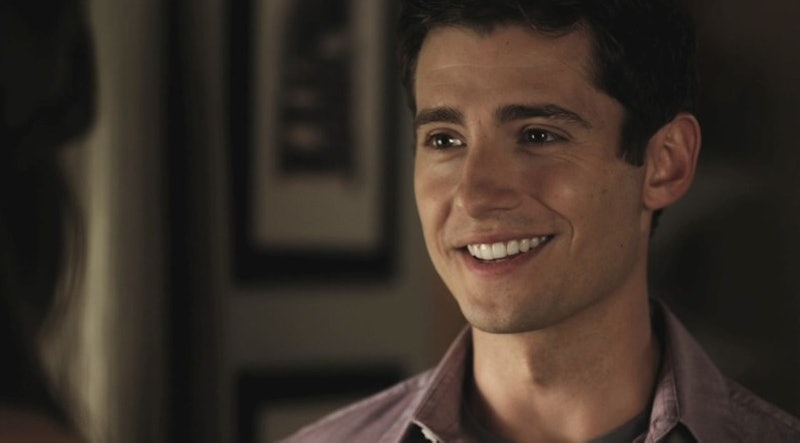 Wren Kingston is one of the most interesting characters on Pretty Little Liars. He’s also not to bad to look at (or listen to, with that crisp British accent). But as interesting and handsome as he is, Doctor Kingston's not without his secrets. The question is: Will Wren return for Pretty Little Liars Season 6 and start giving us some answers?

Wren’s past is pretty checkered. When we first met him, he was engaged to Melissa Hastings while also hitting on Spencer, Melissa’s little sister. Then, even though he’s not from anywhere close to Rosewood, Penn., he opted to get a job at Rosewood’s one and only mental hospital, Radley Sanitarium, where it looked like he was forging IDs and altering patient records (though we don’t know either of those for sure).

After Melissa confessed that she buried Bethany Young alive (thinking it was Alison and Spencer had killed her), she fled with Wren to London, where they’re currently still hanging out, drinking tea, and saluting Big Ben. Spencer visited their apartment but only met their roommate — the couple was supposedly off traveling. Given all of Wren’s doings in Rosewood, we as viewers have seen both his good side and (maybe) bad side — which is the side we should believe?

I’m really not sure, to be honest. Given Melissa’s confessions and her admission that she has been trying to protect Spencer since the beginning, I think the elder Hastings' intentions are mostly good when it comes to her sister and her friends. She must have a plan to bring down A (aka Charles DiLaurentis, who is the same age as her and who I expect she could have known), which is partly why she fled to London with Wren. Even though she’s an overachieving, secretive mean girl, I believe Melissa is on Team Liars.

But what’s in it for Wren, then? It would be very nice to believe that he is assisting Melissa across the pond in a “take A down” plan, but he could also be acting as a sort of double agent for Charles. We know Wren worked at Radley, and there are many theories that Charles spent time there, whether as a patient or a visitor, so it is possible that Wren and Charles know each other and are working together to take down Spencer and her friends. Charles seems obsessed with blood — he’s used it many times to frame a liar or three — and um, Wren is a medical doctor. Who, you know, has access to basically all the blood samples he wants. If he wanted to take them and give them to Charles to do some misdeeds, what would stop him? He could literally have blood on his hands.

Julian Morris, the actor who plays Wren, has been busy starring in shows like New Girl, Hand to God, and Once Upon A Time, so it’s hard to say whether or not he has time in his schedule to appear on Pretty Little Liars again. There hasn't been any news about him returning or official announcements, but there is always the chance that the show wants to surprise us.

We haven’t actually seen Wren in like, two years, but despite the lack of confirmation, my guess for Season 6 is that Wren and Melissa will come back to America, metaphorical guns blazing, with a way to take down Charles/A once and for all. After all, Melissa is a Hastings, and Hastings doesn’t go down easy. Even if he is working as a double agent, Melissa probably knows, and she’ll annihilate Wren, too.

More like this
The 'PLL: Original Sin' Creators Say A’s Identity Will Be “Very Clear” By The Season Finale
By Alyssa Lapid
Every Horror Movie Reference In The 'PLL: Original Sin' Premiere
By Alyssa Lapid
Louise & Mercedes’ Relationship Is “A Little On And Off” After 'FBoy Island'
By Kadin Burnett
Josh Peck Shows Love To Jennette McCurdy After Her Shocking 'iCarly' Revelations
By Radhika Menon
Get Even More From Bustle — Sign Up For The Newsletter