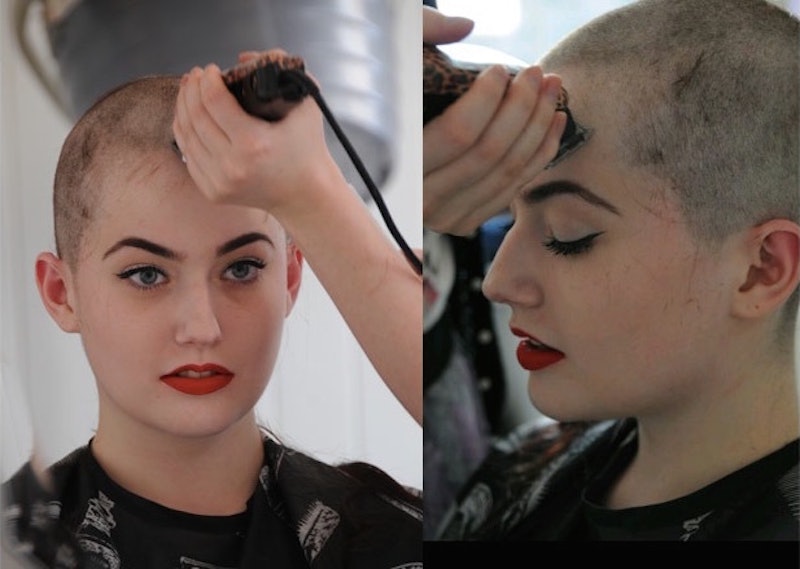 When I was a kid, I rarely brushed my long hair, instead letting it tangle into a matted mess. The only thing that could get me to take a comb to my head was my annual trip to the hairdresser, who always threatened to cut my hair into a pixie cut "just like a boy's hair," and that was just what I needed to scare me into actually brushing my hair. In my mind, looking like a boy would only make me look like a freak — a fate I wanted to avoid at all costs — so I quickly learned to associate long hair with feminine beauty. And although I've gotten much better at taking care of my still-long hair, those gendered beauty standards that freaked me out when I was a kid still persist to this day. But Scotland-based blogger Leyah Shanks shaved her hair to prove that feminine beauty is whatever you want it to be, long hair or none at all, all while raising hundreds of dollars for a cancer research charity.

In a blog post for TalkLife, Shanks wrote, "When trying to describe a woman's appearance, one of the first things that many people think of is hair. Long flowing, silky smooth, 'feminine' hair." To have short hair is, in her words, to be preconceived as "being gay or 'weird'" or sick, so Shanks decided to make a statement about these stereotypes that have been passed down through generations and show how truly illogical these “prehistoric beauty standards for women” are.

The primary goal of this project is to demonstrate that femininity doesn't necessitate long hair, but Shanks's choice to shave was further motivated by a family member's cancer scare, an experience that starkly highlighted the fact that some women don't have a choice when it comes to losing their hair. As Shanks wrote on TalkLife, "With this idea that 'a woman had long hair' and 'a man has short hair' comes an exclusion and segregation of those who deal with conditions which cause involuntary hair loss like alopecia, trichotillomania, and those going through chemotherapy (to name only a few.)"

In an e-mail interview with me, Shanks notes how society's correlation of long hair with feminine beauty could cause even more stress for these patients: "A lady told me that she had recently been diagnosed with cancer and that she was actually more worried about losing her hair rather than the cancer itself." By shaving her own hair, Shanks is raising awareness about these misprioritzed standards, rebalancing the focus toward getting healthy rather than looking "good," and standing in solidarity with these women who can't choose. Shanks said that the lady who reached out told her, "After she had seen what I had done, she didn't feel so scared anymore... That was exactly who I was thinking about when I was doing it."

Shanks decided to link this act to raising money for cancer research, only shaving her head once she had secured £500 in donations for the charity Cancer Research U.K. To date, Shanks has raised over $900 (or £610).

Even this charitable twist wasn't enough to convince some of Shanks's family members that shaving her head was a good idea, though. She tells me her family's consternation stemmed from the fact, "A lot of people still think that 'a woman should look like a woman' and 'a man should look like a man,'" and those comments "made me feel a bit anxious about doing it." But ultimately, she got over the insecurity, and the negative feedback only galvanized her resolve to go through with the buzzcut: "I knew the comments like these and the reasons behind them were proof that it was absolutely something that I had to do."

Shaving her head is a fraction of Shanks's advocacy work, which stems from her blog Body Confidence Revolution. Shanks tells me that she got involved because she was bullied throughout childhood. Although she looked to fashion magazines as a way to escape, the images "only hammered home everything that the bullies had said to me; that I wasn't good enough... It wasn't until I started to grow older that I became more aware of the media industry that surrounded me and wanted to learn more about."

She created her blog as "a place which showcased real life diversity in the hope that it could be a place of solace and reassurance for anyone who feels overwhelmed by the unrealistic imagery which dominates almost everything around us." The women featured on her blog come from all walks of life, of all shapes and sizes. It's a safe corner on the Internet where stretch marks and cellulite and wrinkles and all the others things that are often airbrushed out of photos in magazines are on display, and all of it is celebrated. By so visibly and publicly shaving her head, Shanks is only adding to the body positive revolution she has started, further bending the arc toward more inclusive representation of women in the media.

If nothing else, Shanks has definitely sparked an interesting conversation about the relationship between femininity and hair, and she's clearly hit on something big since the feedback has been "overwhelmingly positive. I've had a few comments from followers which have nearly made me break down in tears." When asked if she'll keep up the new cropped hairdo, Shanks admitted, "I'm not really sure! I think I will keep it for a while just to reiterate my point that a woman can look however the hell she wants." And really, that confidence in one's femininity is more important than any hairstyle.