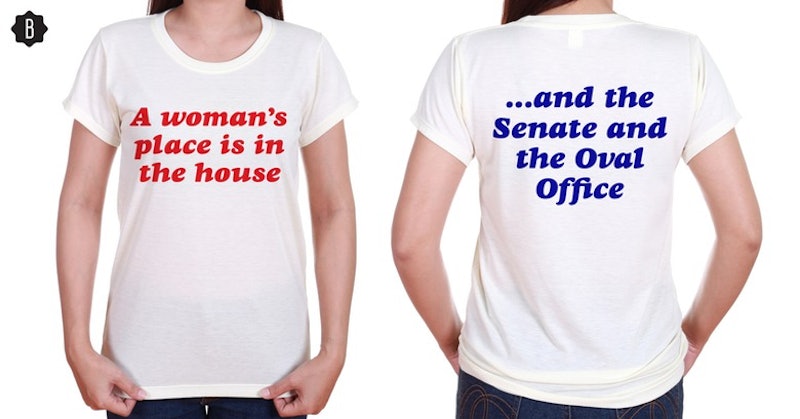 Like many gender equality enthusiasts and social liberals across the country, I could not be more stoked that Hillary Clinton has officially announced her candidacy for presidency of the United States. Americans are long overdue for a female commander in chief, and you best believe I’ll be casting my ballot for the notorious H.R.C in 2016.

However, I wasn’t always the staunch liberal and unapologetic feminist that I am today. I grew up in a very religious, conservative family in a very religious, conservative town in the Missouri Ozarks. I didn’t even start to question whether my region’s and family’s religious and political ideologies really rang true with me until I was nearly a legal adult. And although I think everyone’s beliefs (political or otherwise) tend to change and evolve over time, it’s safe to say I still have a lot of conservative loved ones who just won’t get my decision to vote for Hillary.

If you’re a proud liberal and a proud Hillary supporter with lots of conservative family members too, then I think you’ll agree on the following seven things all of us liberals want our conservative peeps to know before the election madness begins.

1. We Don't Want To Threaten Your Lifestyle

I honestly don’t have any desire to change the way you spend your time. I want you to do your thing, and do it happily. Just so long as your thing isn’t attempting to stunt the progression of my civil, economic, and/or reproductive rights and those of our fellow Americans.

2. We Don't Want To Change Your Mind

I have no desire to try to convert anyone to my liberal ways. Just the thought of debating with someone as conservative as I am liberal literally exhausts me. Besides, I’m not sure I could change a conservative’s mind even if I wanted to. Conservatives are loyal AF to their beliefs, and I can respect that.

3. We Don't All Hate Religion

Many liberals are religious. I’m not particularly. I consider myself agnostic, but I am culturally Christian and I have absolutely no desire to disrespect anyone’s religious beliefs. Ever. I think a person’s religion is deeply personal, and should be treated as such. I can also appreciate that religion brings a lot of peace to a lot of people. I just don’t want it determining who my friends can marry and I don’t want it policing my uterus.

4. We Long For Mutual Respect

Disagreement doesn’t have to equal disrespect. We don’t need to agree on anything to be able to treat one another with respect. That’s just basic manners 101. If Kindergarteners can do that crap, so can we.

As liberal as I am about almost everything, I do like guns. I also feel very strongly it is way too easy for violent people to get their hands on them in this country, but I do support the second amendment. I mean, I’m from Missouri after all.

Guns are as popular as apple pie in the Show Me State, but fortunately, most Missourians are taught how to use them safely at a very young age. I’ve been shooting guns (at cans, not at people or animals) for a long time. My late grandfather had at least 12 guns mounted in his study, my dad keeps one in his safe for emergencies, and I fully intend to own one someday as well.

My morals may be different than yours, but I do have them. I get so tired of hearing “if you stand for nothing you’ll fall for anything.” Because I do stand for things. I support family values, I just don’t think all families need to be started by heterosexual couples. I believe in working hard and showing respect and kindness to all, whether you agree with their opinions or not. I believe a country that was literally started by immigrants should be less hostile to those wanting to create a better life for themselves in the United States. And I believe a good education shouldn’t be a privilege, but a right to those who seek it.

7. We Love America Just As Much As You Do

Being liberal doesn’t make me any less of a patriot. In fact, The Patriot happens to be one of my favorite movies. I’ve loved studying the United States and its history since I was a little girl, and although I want to see as much of this planet as possible in my lifetime, I don’t really want to live anywhere else.

I love this country, I just want it to truly be a place where everyone is entitled to equal rights. That’s why I’m a liberal, and that's why I'm voting for Hillary Clinton in 2016.

More like this
25 Inspiring Quotes From Black Women To Celebrate Black History Month
By Kyli Rodriguez-Cayro and JR Thorpe
Watch Jacinda Arden’s Devastatingly Honest Resignation Speech
By Sam Ramsden
24 History-Making Black Women You Probably Didn't Learn About In School
By Ayana Lage and JR Thorpe
These Artists Are Reimagining Black History Month To Create A Better Future
By Katie Mitchell
Get Even More From Bustle — Sign Up For The Newsletter
From hair trends to relationship advice, our daily newsletter has everything you need to sound like a person who’s on TikTok, even if you aren’t.