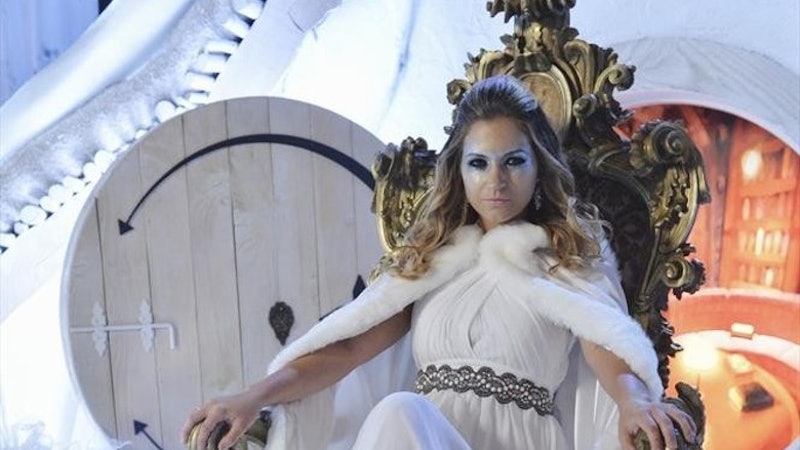 I hope you're ready for a lot of answers, Pretty Little Liars fans, because Season 6 is promising to resolve all of our burning A questions. I just hope the show is saving room for some non-A related questions too, since they're just as pressing. For example, what has CeCe Drake been up to, and how involved has she been in all of the other mysteries? I'm not saying we need a full CeCe flashback episode, but I don't think anyone would complain if we got one. Of course, first we need to know if CeCe will be in Pretty Little Liars Season 6 at all. I'm going to ask nicely for her to show up — please — because we need to see some CeCe stories wrapped up. No use dragging them out any longer, PLL. Most guest stars for Season 6 have already been announced — and the show's IMDB page has been updated frequently — but there's no sign of Vanessa Ray, who plays CeCe, anywhere. This worries me. Even if Cece has nothing to do with the A team, Charles, or any other overarching mysteries, there are still a ton of loose threads in her storyline. She comes and comes so quickly from Pretty Little Liars, I'm pretty sure she's given me whiplash.

Even though there's no confirmed CeCe appearance for Season 6 – yet — I'm going to hold out hope that PLL just wants to surprise us with her return. Why is it so important to me? She may just have the answers to these six mysteries.

Remember when Ali was secretly seeing Ezra and referred to him as Board Shorts? There was another guy she secretly dated that summer, Beach Hottie. As it's been discussed, Board Shorts and Beach Hottie are two different people. If one of them's Ezra, who's the other? And was he the guy who gave Ali a pregnancy scare? CeCe spent all summer with Ali, so she must know his true identity, even though she pretended otherwise when confronted by the Liars.

2. Did She Know Bethany?

In the Season 4 finale, when CeCe is first pulled into questioning about Ali's disappearance, she admits that she knows it's not Ali in the grave, and that she knows who is in the grave. How did she know it was Bethany Young? That means she must have seen Behtany that night, and also recognized her. Explain yourself, Drake.

3. Why Did CeCe Really Get Kicked Out Of UPenn?

The story goes that CeCe pushed a girl down the stairs at UPenn, which got her kicked out. She blames the Liars for this, but doesn't seem to blame Ali for it. And then she helps Ali and the Liars, so is she mad at them or...? There's more to this story. We need to know about it. Also, where are her parents? Are they not a little mad that she was expelled from college?

We know that she wore a red coats sometimes and has blonde curly hair, so is CeCe THE Red Coat? If she's not, who is? You realize we don't know their identity yet, right? Red Coat sightings have been sparse for a while, and it seems that they stopped once Ali returned to town. But that still doesn't reveal the mysterious figure's true identity.

5. Why Did CeCe Break Up With Jason?

CeCe was dating Jason the summer before Ali disappeared, and just after Ali went missing, she broke up with him. She never really gave him a reason why. If you don't mind me asking, CeCe, what exactly was the reason?

6. What's The Deal With Fake IDs In Rosewood?

This has actually been bothering me for a while. It feels like every other day Ali had a new fake ID, and she shared that wealth with CeCe. CeCe got a fake passport and left the country with it. It's a tiny little thing in the greater PLL story, I know, but I'm just really curious about what kind of underground counterfeit ring these IDs are coming from, and how CeCe and Ali got wrapped up with it in the first place.

Hopefully we'll see CeCe when Pretty Little Liars returns so the "Summer of Answers" can truly live up to its name.

More like this
The 'PLL: Original Sin' Creators Say A’s Identity Will Be “Very Clear” By The Season Finale
By Alyssa Lapid
Every Horror Movie Reference In The 'PLL: Original Sin' Premiere
By Alyssa Lapid
Louise & Mercedes’ Relationship Is “A Little On And Off” After 'FBoy Island'
By Kadin Burnett
Josh Peck Shows Love To Jennette McCurdy After Her Shocking 'iCarly' Revelations
By Radhika Menon
Get Even More From Bustle — Sign Up For The Newsletter