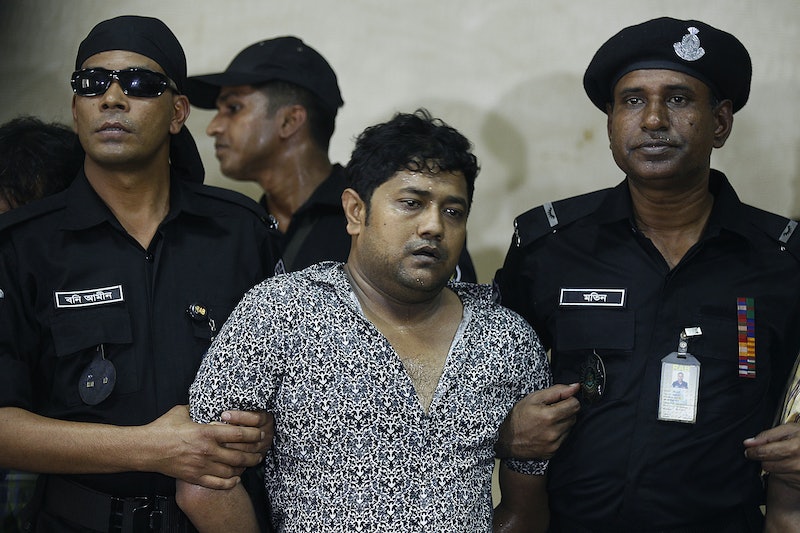 The 2013 collapse of a garment factory in Dhaka, Bangladesh, horrified the world as more than 1,100 people were killed in the South Asian country's worst industrial disaster. On Sunday, authorities said factory owner Mohammad Sohel Rana would face murder charges for the collapse of Rana Plaza on April 24, 2013, along with dozens of others, including Rana's parents, allegedly connected to the incident. Lead investigator Bijoy Krishna Kar described the incident as a "mass killing" to Agence France-Presse and said all 41 people charged had a "collective responsibility for the tragedy."

What made the disaster so tragic was how much it could have been prevented. A government report released a month after the incident revealed the nine-story factory had long shown signs of danger. The day before the collapse, workers rushed out after the building began to shake and cracks appeared in the walls and ceilings. An engineer was brought to the scene and found the building to be unsafe. But despite those warnings, factory bosses ordered thousands of workers to return to work in the morning. And according to The New York Times, when a generator was turned on, the building collapsed. The disaster killed 1,127 people and injured another 2,500, who were rescued alive from the debris.

The report also said Rana illegally constructed upper floors and used substandard materials while allegedly bribing local officials for construction approvals. Rana, who was arrested days after the collapse as he attempted to flee to neighboring India, was set to be charged last year. But his case was held up as authorities awaited approval to pursue charges against a dozen government officials for their alleged roles in the disaster, according to AFP. A trial date has yet to be set. The death penalty could be an option should Rana be convicted.

The Bangladeshi factory incident marks the world's third deadliest industrial disaster. Ranked first is the 1984 Union Carbide gas leak in Bhopal, India, which claimed 3,787 lives after 80,000 pounds of toxic gas leaked from a pesticide factory and poisoned more than half a million people. The second worst industrial disaster was the 1942 Benxihu Colliery coal mine explosion in China, which killed 1,549 people.

There are still months, maybe even years, before this sad chapter in Bangladesh's history comes to a close. But now, more than two years later, the country is perhaps on a path toward finding solid reform for the unsafe conditions of its apparel industry.