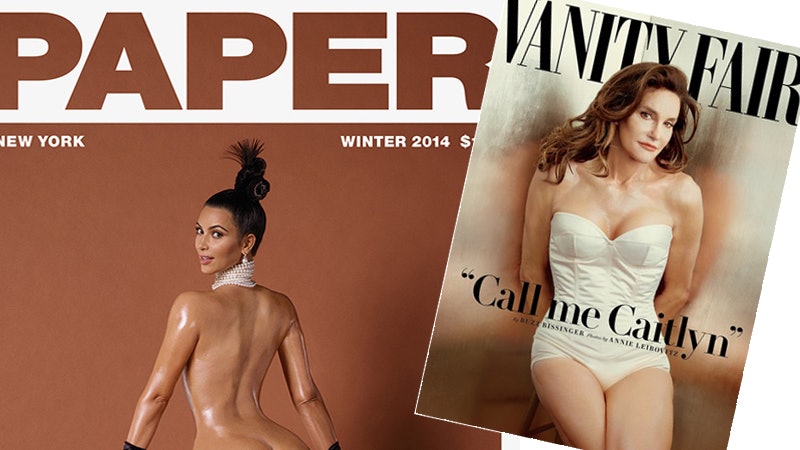 Break the Internet, Caitlyn Jenner! As I'm sure you've already heard, Caitlyn Jenner, formerly known as Bruce Jenner's Vanity Fair's cover was unveiled today, stealing the thunder away from stepdaughter Kim Kardashian's pregnancy announcement. That's right, Jenner managed to do the impossible and overshadow the otherwise monumental announcement of the second Kimye baby. But will it go down in history for being as huge an Internet event as the (also iconic) oiled up Kim Kardashian butt that graced the cover of Paper Magazine a few months back? My guess is, yes.

First of all, Jenner's cover is a historical moment in itself. Over the years, Jenner has appeared on the cover of numerous national magazines, GQ and Sports Illustrated among them, but this is the first time that she's appearing as her true self. Hell, it's the first time a transgender woman has appeared on the cover of Vanity Fair period. Though Laverne Cox has appeared on Time and Bust Magazine respectively, that's basically it for trans people on the cover of mainstream publications. This marks a step towards normalization that the world desperately needs. Kardashian's bum, as shiny and prominent as it is, is something we've seen several times before.

Likewise, the Paper cover, as amazing as it was, was a story conceived with the intention of spurring conversation, going viral, and inspiring memes. The Jenner cover also encourages people to create a dialogue, but Jenner makes clear that she is not going through this for the publicity — she is going through it so that she can live her true self and help others who are struggling with gender identity. Though we've touched upon snippets of that story in the recent Diane Sawyer interview, we've also been force fed sensational and exaggerated glimpses of Jenner's transformation through tabloid pages before that. Through this outlet, Jenner has the agency to get the record straight, and truly be inspiring to others who feel uneasy in their own skin.

Moreover, this cover wins all the awards for establishing that Jenner is indeed her own person, and she's going to live her life to the fullest. And, although we know that Jenner will always be keeping up with the Kardashian clan, it's important to note that she's separated herself from the group by choosing to spell Caitlyn with a "C" and not a "K." Though it may seem silly, the devil is in the details, and that simple decision shows that this is her own journey, nobody else's.

With all of that aside, let's just state the obvious: Jenner looks amazing. Happy, healthy, and absolutely glowing. It's not the focal point of why this is an important moment, but we have to give credit where credit is due. So, let's get back to our original question: will this cover break the Internet harder than anything we've seen from the Kardashians before? Only magazine sales will tell. But, given the way social media is exploding with an overwhelming outpour of support, I'd say that Jenner has without a doubt won the Internet.