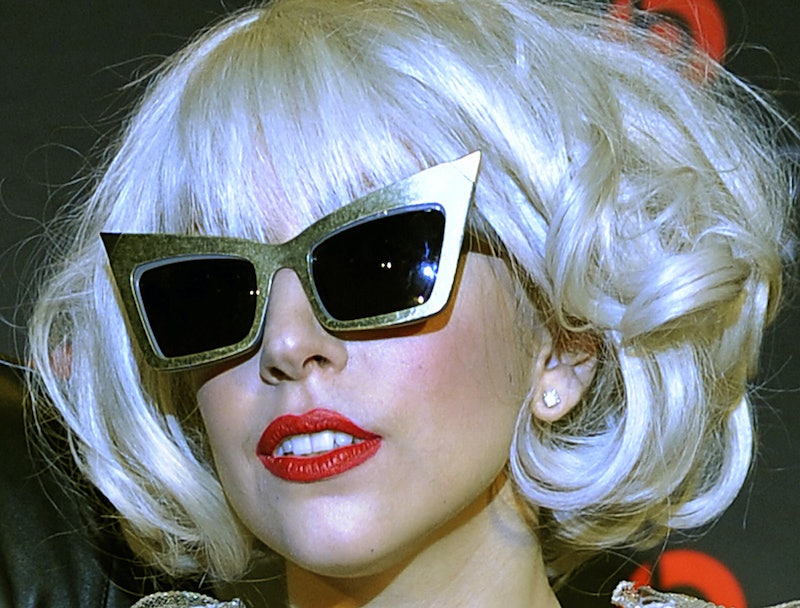 Lady Gaga may be adorably engaged to Taylor Kinney (her heart-shaped engagement ring is #lifegoals), but don't get it twisted: Homegirl is not pregnant. And because she's Lady Gaga, she shut down those pregnancy rumors faster than you can say "can't read my poker face." Or something...

Speaking to the audience at her Los Angeles show with Tony Bennett on Sunday night, Gaga addressed the Hollywood Bowl crowd with some real life truth bombs about her figure and the fact that she is most definitely not expecting:

I'm getting a little older and many people think I'm pregnant but I tell them, "I'm just almost f---ing 30."

As in: Calm down, society, and let Gaga live — she's only in her late twenties (29 if you want to get all precise about it) and only she can decide when and if she wants children. Not to mention the fact that she's riding the success of her career (need I remind you that her album with Tony Bennett won a Grammy?), so maybe she's a little preoccupied at the moment. #TooBlessedToBeStressed, Gaga. You tell 'em.

According to People, Lady Gaga also openly acknowledged that she is sporting a fuller figure these days and even embraced her curves in front of the audience.

"Tony's taught me [that] you can live your life and feel the same every single day forever... Me on the other hand, I'm having a more difficult time with things," Mother Monster said as she reportedly grabbed her thigh. "A little more here and there."

For Lady Gaga, who previously revealed that she suffered from bulimia and anorexia starting when she was 15, the scrutiny about her weight is not only offensive — it's downright dangerous and sends a horrible message to others dealing with eating disorders. And when put in that context, it just makes her reaction to those pregnancy rumors even more badass — and important.