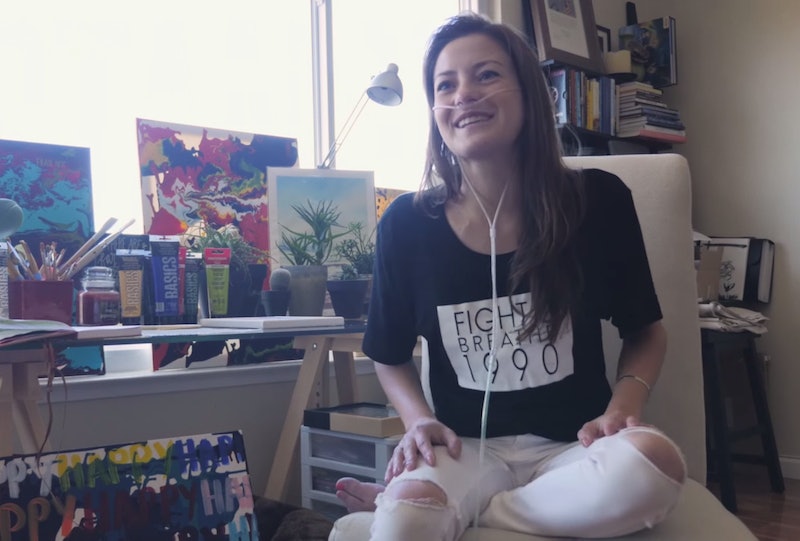 In many ways, Caleigh Haber is your typical, fun-loving 24-year-old: She loves Beyoncé, Ellen DeGeneres, sushi, and her dog, London. She’s an amateur painter and a trained pastry chef, and she has an infectious laugh. She’s also an adult living with cystic fibrosis.

Cystic fibrosis (CF) is a genetic disease that affects the lungs and digestive system. CF causes people to produce unusually thick, sticky mucus that disrupts proper lung and digestive function. It’s a serious, life-threatening illness; when Caleigh was diagnosed with the disease on the day she was born, she was given a life expectancy of less than 18 years. Now well past that point, she’s still fighting strong as she waits for the double lung transplant that could save her life. In a recent video, Caleigh talks frankly about what it’s like to live with an illness that requires her to have supplemental oxygen, a feeding tube, and breathing treatments four times a day. However, she also discusses the things that make her happy—a list that ranges from the Giants to her dog to her medical team. Tremendously likable, Caleigh is funny, warm, and charismatic. Despite the very real difficulties she faces, Caleigh’s love for life is palpable. You’ll find yourself instantly rooting for her.

Caleigh’s story is part of “The Happiness Stories,” a video series from filmmaker Ron Parida that documents the lives of people living with chronic illnesses. As The Happiness Stories YouTube channel suggests, the series is focused on both raising awareness of these illnesses and spreading joy. Parida writes, “Happiness is a CHOICE we all have, and the goal of this project is to show this through mini documentaries in the hopes of inspiring.”

At the end of the video, Parida reminds viewers that Caleigh is on a list for a double lung transplant for over a year, as she waits for a suitable donor. This video is a perfect reminder of why organ donation is so important, and of why we all should sign up. As Parida asks, when it comes to organ donation, “WHY NOT?” Organ donation costs the donor nothing and can save many lives. Find out more about how to sign up to donate here, and learn more about Caleigh Haber and her fight against CF at Fight2Breathe.