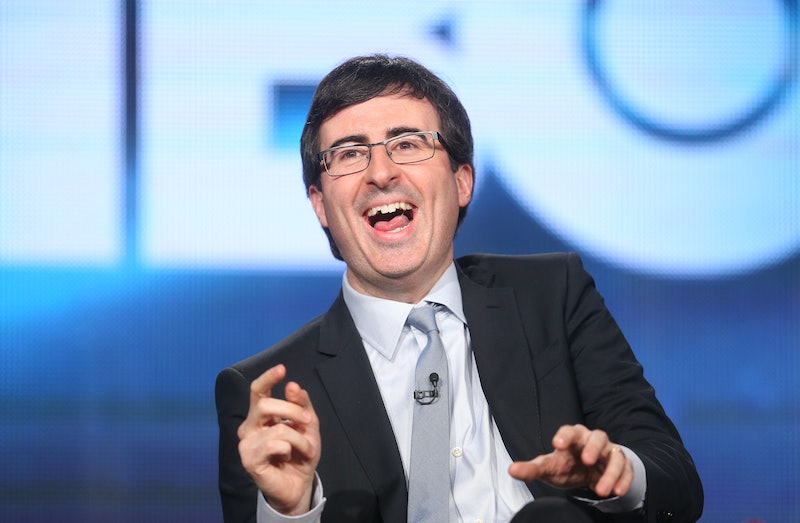 John Oliver has only been hosting HBO's Last Week Tonight for a little over a year, but in that time, he's had an uncanny talent for making fun of problems or issues in a way that gets people's attention beyond his Sunday night time slot. On his most recent show, Oliver pledged to sponsors of FIFA that he would happily consume their products if they could "make Sepp Blatter go away" and pull their support for FIFA. He'd wear a pair of weird Adidas shoes, take a bite out of every item on McDonald's value menu, and even drink a Bud Light Lime.

For a show that serves as a review of the past week's news, it's a little odd how often Last Week Tonight is actually ahead of the curve, almost as if Oliver has some weird super power. Like on Tuesday, when, a few days after Oliver's rant, Blatter resigned amid reports he was under investigation. Now, there's nothing so far as to suggest the sponsors had anything whatsoever to do with Blatter's resignation, but Oliver had a little fun with the news and appeared to make good on at least one of his promises. Soon after the resignation news broke, Oliver tweeted out a picture of a bucket of Bud Light Lime bottles with the single word "Champagne."

Not convinced of Oliver's powers? OK, there's a chance he's just on the lucky end of a bunch of really strange coincidences. But at least one group is crediting Oliver for providing renewed attention to the problem. Here are a few examples of John Oliver's fortuitous timing and the impact Last Week Tonight may or may not be having on real-world issues.

In May, Oliver railed against the contract chicken farming industry, pointing out that multiple chicken farmers live below the poverty line because of a system that he said was designed to produce maximum profit for the chicken industry at great cost to the farmers. To say he ruffled feathers is putting it mildly. The National Chicken Council issued a statement calling Oliver's report "not an accurate reflection" of its industry and its farmer partners. But those who supported improving agriculture policy to better protect farmers said this was the first time the issue received any real attention in a long time. Ohio Rep. Marcy Kaptur told Politico, "We’ve never had publicity like this in the 16 years I’ve been working on this issue."

Edward Snowden And The NSA

In April, Oliver traveled to Russia to interview Edward Snowden, who exposed the scope of the NSA surveillance program when he turned over documents to journalists in 2013. The two talked about the problems of bad passwords, dick pics, and the realities of the NSA's spying. On Monday, several key provisions of the Patriot Act expired, giving some validation to Snowden's efforts. Oliver probably doesn't get direct credit for this one, but he gets kudos for trying to explain the complexities of the NSA's surveillance in terms that made it relatable for a more mainstream audience. Because who doesn't understand the need to keep dick pics private?

The Government Of Thailand

Back in 2014, Oliver openly mocked the government in Thailand for its repressive stance on speech. Anyone who makes fun of the royal family in Thailand could spend time in jail, he reported, and called the country's crown prince "buffoonish." The Thai government didn't think his jokes were funny and accused Oliver of "undermining the royal institution," according to Vice News, which obtained a document that indicated the government was "paranoid about Oliver's activities." The comedian's Thai call out helped bring the country's longtime censorship of free speech to an international platform.

Whether he's just on top of news (even week-old news), Oliver does have a way of driving conversation and getting people talking. No word yet if he'll come through on the rest of his FIFA promises, but it seems likely he won't want to mess with his winning formula. Get ready to see him tackle that McDonald's value menu.

More like this
Watch Jacinda Arden’s Devastatingly Honest Resignation Speech
By Sam Ramsden
This Is When Netflix Is Going To Start Charging You For Sharing Passwords
By Darshita Goyal
6 Organizations Fighting Police Brutality That You Can Support Right Now
By Syeda Khaula Saad and JR Thorpe
What The UK Blocking Scotland’s Gender Recognition Bill Means
By Sam Ramsden
Get Even More From Bustle — Sign Up For The Newsletter
From hair trends to relationship advice, our daily newsletter has everything you need to sound like a person who’s on TikTok, even if you aren’t.