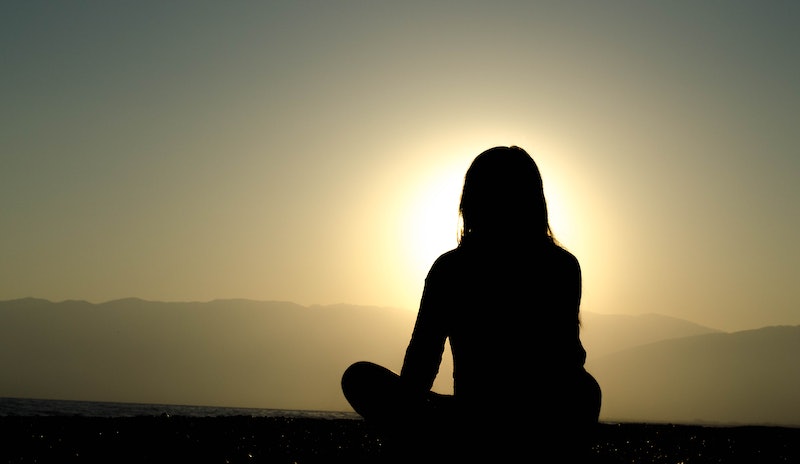 When someone tells you that they have started meditating, you may picture Gwyneth Paltrow blogging from a meadow while chowing down on sex bark, or your middle school art teacher who wore paisley caftans and smelled like something you now suspect wasn't actually incense. But despite its New Age connotations, there are actually volumes of scientific literature devoted to the health benefits of meditation, and the proof is in the chia seed pudding. Not only does meditation ease stress and help you get your beauty sleep, it can also protect your brain against cognitive decline and even boost your immune system.

Broadly speaking, meditation falls into two categories: concentrative meditation and mindfulness meditation. You're likely most familiar with concentrative meditation, in which the practitioner concentrates (get it?) on a particular object or phrase (om being the gold standard). Mindfulness meditation, which has gained in popularity in recent years and tends to be the focus of the scientific literature, is more passive: the practitioner is invited to consider any thoughts or sensations that arise, and then let them drift peacefully away. Mindfulness is also a staple of cognitive behavioral therapy, a powerful tool that helps ease anxiety and depression. There are plenty of ways to practice these types of meditation, from mindful yoga to guided meditation (of either kind) to techniques that combine the two in a push-pull of focused attention and passive acceptance, each with its own unique (but relatively similar) set of health benefits.

Ready to get yourself a mantra, don that caftan (it's actually super comfortable), and get to chanting? Here are six science-backed reasons to start saying om today.

Meditation reduces stress? Get outta town. Okay, this may not be earth-shattering news. But what you may not know is that meditation doesn't just reduce stress from a psychological perspective — it has a physiological impact, too. For instance, a 2011 study in the journal Psychiatry Research: Neuroimaging found that people who participated in an eight-week meditation program, meditating for about half an hour each day, not only reported feeling less stress, but had lower density in the amygdala when their brains were viewed on brain imaging machinery. Since this region is involved in regulating anxiety and fear, a less dense amygdala could contribute to lower levels of anxiety and stress.

And in 2014, researchers reviewed 47 published studies of mindfulness meditation involving more than 3,500 participants, and confirmed that meditation could improve anxiety, depression, and stress in these patients. (They did caution that the statistical effects of these studies were small, so don't go thinking meditation is a cure-all.)

From lower blood pressure to stronger immune systems, people who meditate appear have better overall health. In a 2010 study in the Journal of Alternative and Complementary Medicine, for example, researchers found that 24 people who participated in a eight-week "mindfulness-based" stress reduction program that included meditation had increased biological markers of natural killer cell activity — a type of white blood cell that helps prime the immune system — and decreased levels of C-reactive protein, which is produced by the liver in response to inflammation in the body. And a 2014 analysis of 34 published studies of "mind-body therapies" confirmed that these practices do, indeed, seem to boost the immune system.

Meditation can keep your heart in optimal shape, too. In addition to your standard approaches for managing blood pressure and cholesterol (diet, exercise, getting a little sunshine now and then), meditation can be another tool for keeping your heart healthy. A 2012 study in the journal Circulation: Cardiovascular Quality and Outcomes found that among 201 people with coronary artery disease, those who participated in a "targeted mind-body intervention" involving twice-daily transcendental meditation were 48 percent less likely to have a heart attack, stroke, or die compared with people who only participated in a general health education class. Not surprisingly, the people who meditated also reported feeling less stress and anger.

If counting sheep isn't doing the trick, a little mindfulness meditation might be just what the doctor ordered. According to a study published in JAMA Internal Medicine in February, the technique can help people with insomnia and other sleep disorders get a better night's sleep.

For the study, researchers tested a program of guided mindfulness meditation against a program of general sleep education (which included learning about sleep problems, stress reduction and relaxation techniques, and good sleep hygiene) in a group of 49 people aged 55 or older. People in the meditation group were also asked to practice meditation at home, for up to 20 minutes each week — not a huge ask, and yet the benefits were significant. At the end of the study, people in the meditation group were sleeping better and feeling less daytime fatigue and depression than people in the sleep education group.

Meditation may protect against age-related damage to the brain's gray matter, which is involved in processing information and forming memories. Gray matter begins to deteriorate once you hit your late twenties (enjoy that on your 30th birthday), but according to a study in the journal Frontiers in Psychology, people who meditate may have less age-related gray matter loss.

For the study, researchers scanned the brains of 50 people who practiced meditation for at least four years (one participant had been meditating for over 45 years!) and compared their gray matter loss to that of 50 age-matched people who had never meditated. While everyone had some gray matter atrophy over time, those who meditated had less gray matter loss throughout the entire brain, suggesting better overall cognitive function.

Having trouble kicking the habit? Adding a dose of meditation to your nicotine gum could help you butt out for good. In a 2013 review published in the journal Drug and Alcohol Dependence, researchers analyzed 14 clinical trials where yoga and meditation programs were used to help participants quit smoking. The authors found that these studies, while small, showed "promising effects" suggesting that meditation could be a helpful tool for smoking cessation, although they called for more studies to confirm the results.

Chronic pain is a notoriously difficult condition to treat, and it has contributed to Americans' over-dependence on opioid narcotics and a rising number of prescription drug-related overdoses and deaths. And according to some pain experts, treating pain with drugs like morphine or codeine may not even be as effective as using a combination of cognitive-behavioral therapy and lifestyle interventions that may include physical or occupational therapy, diet, exercise, and, yes, meditation.

And the research seems to back that up. In 2012, a review of 16 studies of people with chronic pain who practiced mindfulness meditation found that in 10 of the 16 studies, subjects reported feeling decreased pain after starting the intervention. Some research has suggested that meditation helps reduce pain intensity by activating pathways in parts of the brain that regulates physical and emotional pain processing — regulating both how you physically experience the pain and how you react to it.