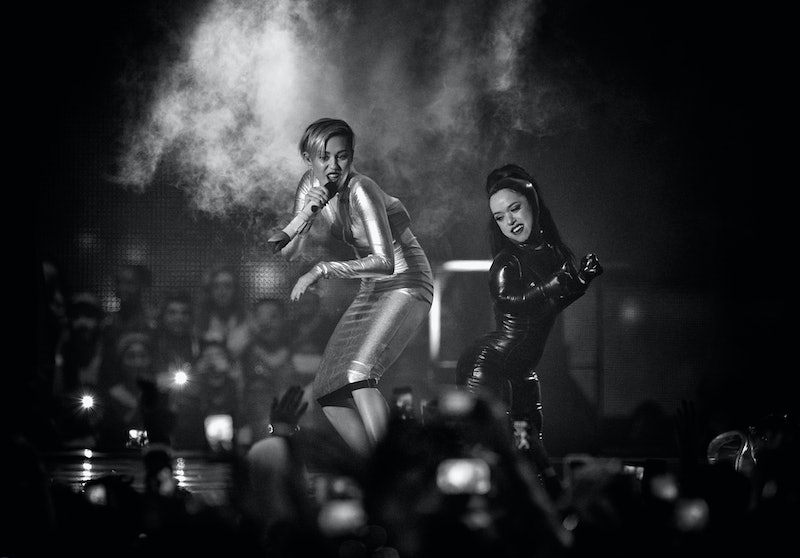 Miley Cyrus is, according to Miley Cyrus, a cool sorta naked hermit who's the "biggest feminist person in the world." At least that's what her latest interviews would have you believe. Oh, coming-of-age and growing up — you are a spectacle that should be reserved for home movies and terribly unrealistic Hollywood classics. Not served on a piping hot platter of gossip and bullshittery as prepared by an overexposed pop star, but I guess that's just where we are at this point. Oy: my chest, it heaves.

Miley Cyrus and everyone else in the world need to stop talking about Miley Cyrus. There: I've said it. And I'm serious! I'm sick and fucking tired of having to write about her and her ascent into adulthood (we hope) as told through the batshit media sideshow that being famous in America has become. But I can't stop writing about her — you know why? Because of all of you motherfuckers. Yeah, I'm talking to you, random Internet stranger (or my mom, in which case: hi and sorry I called you a motherfucker just now), you are the reason I have to write about Miley Cyrus all the time. You're the ones that can't get enough of all the stupid shit she says and does in the name of art. And your clicks, and links, and shares, and page views, have driven me to the edge of my own sanity: I am a slave to them because that's what you all have proven you want, time and time again. Hope you've left your meat unseasoned because it's about to get fucking salty up in here.

I'm not against Miley Cyrus. Quite the opposite: I think she's a young girl who's had to shoulder a lot of responsibility on her back while being surrounded by an infantry of yesmen and other succubi who stroke her ego into submission and/or record sales. She's a kid, essentially — and hasn't ever really figured stuff out for herself. At least not yet. Do I like her music? Not particularly, but I will admit that Wrecking Ball is a good pop song. Do I care that she's famous? Do I want to know her every thought on every thing? Have I decided to hold Miley Cyrus under a microscope and proclaim her every move and utterance a disgrace against [insert large and varied swath of humans here]? In the words of Whitney Houston, oh hell to the no.

Because it's not — and should not be — that serious. This is Hannah Montana growing up, working her shit out in public (because dollars and ego), and talking about a lot of different stuff that she may or may not have the life experience under her belt to utilize in fully understanding the nuance. That isn't something we should hold against her: Miley Cyrus holds ownership over just one of the 7 billion+ lives on this earth. Her worldview, just like all of our own, is very limited by its own experience.

Miley Cyrus is not an expert on women, life, living, breathing, feminism, or Millennials so why do you fuckers all insist on treating her every word as such? Having an opinion on her opinions just to have an opinion is the most counterproductive use of time imaginable. Go read a book or get a hobby. Life is not just water cooler conversation starters.

Ultimately, Miley is going to be whoever the fuck she wants to be. Just like everyone else in the world is going to be whatever the fuck they want to be. That's called living and being alive. And it's all different and it's all unequal. And even though society imposes guidelines, there are literally no rules as to how we're supposed to go about this whole mess of life. And sometimes that proliferates itself in misguided and weird ways. Sometimes those antics are not to the taste of the general populace, but that's not all that weird or audacious. Everyone just gets mad at Miley about it because she has a goddamn stage (literal and metaphorical, natch).

Do I agree with everything she says and does? HA HA HA, please. I have my own mind and thoughts and know how to formulate opinions for myself. For example, her comments about "strategically" using nudity to keep people watching? — "Guys, they like flip the channel when Miley Cyrus is coming on. You know I'm at least going to be kind of naked. So it makes me people stick around and watch a little more. Then they are actually like, ‘She can hold a note.'" — Bums me right the fuck out. Add while I appreciate and respect the idea of reclaiming something like nudity — in the similarly feminist vein of the word "bitch" — it's still a little cringe-y to see someone doing it who thinks they have full control in the situation when they clearly don't. You can't just half-understand something and expect people to take your word as expert.

But it's an easy observation to make from the bully pulpit, because we're not in it with Miley. Maybe she doesn't agree that her entire career is based on other people's perception and ingestion of her as an entity. Try as you might you will never control another person's perception, though. Because the harder you try to do that the worse you'll fail.

Just because she thinks and wants people to think "She can hold a note" doesn't mean that's what they think. And while she can play on the stage as having the upper hand, I'm not so sure she does. Nor does she understand that she honestly never has the upper hand in these situations because she is literally giving herself up for other people (like her managers, agents, label execs, photographers, or fans).

Self-discovery is a really annoying process of missteps to go through, but go through it we all must, lest we aspire to live in the trenches of infantile drudgery. I only hope that Miley doesn't continue to rely on her fans and her sexuality alone to understand the scope of her own work. Because the fact of the matter is that sometimes we all deserve to get a little heat. (Heat is good! Heat keeps us in check and gives us an outside perspective!) We don't have to always like it or agree with it, but it's unhealthy to live in a world where you think everything you touch turns to The Shit. From constructive criticism comes a greater or different understanding, which is largely the goal of good art. Most any artist will tell you that.

But Miley's claimed that she's gained millions of new Twitter followers simply because "people [are] finally getting to hear the record" is the most indicative statement of it all. While some of them may have joined the Digital Church of Cyrus for just that — I'd put a good amount of money on the fact that the vast, vast, vast majority have not. No! They just want to hear you talk, see you do crazy shit, and have an up-to-the-second account of it all that they can latch onto.

Still: no one wins in this great big Miley clusterfuck, because we're all just using each other. Miley's using the audience for attention, money, and notoriety. Albums sales, all-press-is-good-press type shit. But Miley's being used, too. By her record label (and, let's face it: probably a couple others, too). And you — yes! I was serious before when I meant you, right there, reading this right now — you're using Miley: as entertainment, as an outlet, as a boredom-staver, as punching bag for your own frustrations. And I/we/people who write on the Internet are using that — and you — for page views. See how this all works? It's some Sisyphean bullshit and I'm so goddamn over it. So I'm not writing anything more about Miley's antics and you can't make me — I'm a freelancer, damnit! Just like Miley, I make my own rules.