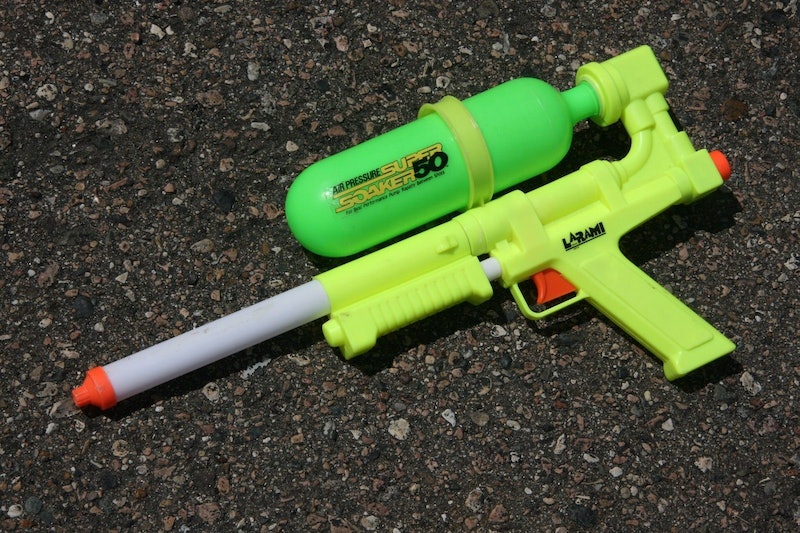 Admittedly it's been a little chilly this week here in the Tri-State Area — but you guys? It's June. That means it's summer, which means it's time to reminisce about our favorite summer toys from the '90s. There was nothing quite like summer vacation when we were kids, so even though most of us grownup working stiffs typically have to work through it now, it's weirdly amusing to look back wistfully on those hot, lazy days.

In honor of the first Throwback Thursday of the summer, I've gathered 12 classic '90s toys those of us who grew up during the decade all coveted when we were kids. Were they absolute necessities for a memorable summer? Of course not. But they certainly helped, and I, for one, have a ton of fond recollections featuring them tumbling round in my memory banks. Nostalgia can be self-indulgent, sure, but it's kind of nice to let yourself get lost in it every now and again.

The best part? While some of these toys have gone the way of all things, a bunch of them are still available in newer, shinier versions today — and the ones that aren't can often still be found on eBay. I might not have a backyard with a garden hose anymore, but if I could get my hands on a Crocodile Mile, you can bet I'd go on the hunt for an appropriate location to use it. Happy summer, everyone!

If you had a Super Soaker, you were indisputably the coolest kid around. If you've been wondering why today's incarnations look a little different from the Super Soakers of your youth (who could ever forget that neon yellow, green, and orange color combo?), it's because they're no longer sold by Larami; Larami was purchased by Hasbro in 1995, with the company name officially being retired in 2002. Super Soakers are now sold under the Nerf name.

Slip 'N Slide may have been stupidly dangerous, but boy was it fun — in theory, at least. First introduced in 1961, it was supposed to turn your backyard into a sort of horizontal water slide. Alas, it never really worked quite as well as most of us hoped it would; mostly we ended up with wet grass stuck to our legs and a few sore necks. Ah well. Can't win 'em all.

If Slip 'N Slide looked cool, Crocodile Mile looked badass. Like its yellower, blander cousin, Crocodile Mile didn't it really work the way we wanted it to — but it made up for it by encouraging us to sail down a soaking wet runway into a fake crocodile's mouth.

4. Those Rings and Sticks You Practiced Diving With at the Neighborhood Pool

These guys are still around, but now they look like seahorses. Fancy.

Admittedly I kind of missed the Fun Noodle boat — my impressively long awkward phase meant that I wouldn't feel comfortable in a swimsuit roughly a decade and a half, which, in turn, meant no pool toys for me around the time Fun Noodles became popular. They came in handy when I attempted to snorkle for the first time in relatively deep water about three years ago, though, so consider me a Fun Noodle convert. They're just so useful — and besides, who doesn't enjoy the term “Fun Noodle?” No one. That's who.

You know, the one where you throw a tennis ball and catch it on a circular paddle lined with Velcro. It was best played on the beach, but a backyard was an acceptable location if a beach trip wasn't in the cards. Just… don't play it indoors. That way, disaster lies — and broken lamps.

All the wetness of water balloons, none of the rubber scrap to clean up afterward. While it's doubtful that any water toy will ever be considered totally environmentally-friendly (hi there, wasted water!), Splash Bombs were (and are, since you can still get 'em today) at least better for the planet than actual balloons.

I don't really know that arm floaties made learning to swim any easier, but I'm willing to make an exception for them if they have Batman on them.

Confession: I've never played with one of these. Clearly I need to get on that this summer, because what good is being a grownup if you can't be a kid every now and again, right? From what I gather, playing with a Splash Out was kind of like playing Hot Potato — but if you were caught holding it when the music stopped, you'd get a face full of water. Technically that meant you lose, but when it's blistering hot outside, I would argue that it's major, major win.

11. Anything That Changed Color When You Dunked It In Water

Technically these Hot Wheels Color FX cars weren't meant to be a summer toy, per se — but it didn't really matter. They changed color when you hit them with water; summer was the time of year when water guns reign supreme; ergo, we shot our Hot Wheels cars with our water guns all the time, because things that change colors are awesome. They were later replaced by Color Shifters, which have had almost yearly releases since 2008.

Rockets are cool. Water is cool (literally). Water rockets are super cool. Unfortunately Splash Off Water Rockets were eventually recalled in 1997 due to being a safety hazard.

More like this
Netflix Reveals First Look At Wednesday In The 'Addams Family' Spinoff Series
By Bustle Editors
The “Teenage Dirtbag” Trend Is TikTok's Latest Nostalgic Obsession
By Meguire Hennes
Social Media’s Favorite Fashion Influencer is Meredith Blake from ‘The Parent Trap’
By Morgan Sullivan
Are Skater Shoes the Next Y2K Trend to be Revived by Gen Z?
By Lauren Alexis Fisher
Get Even More From Bustle — Sign Up For The Newsletter