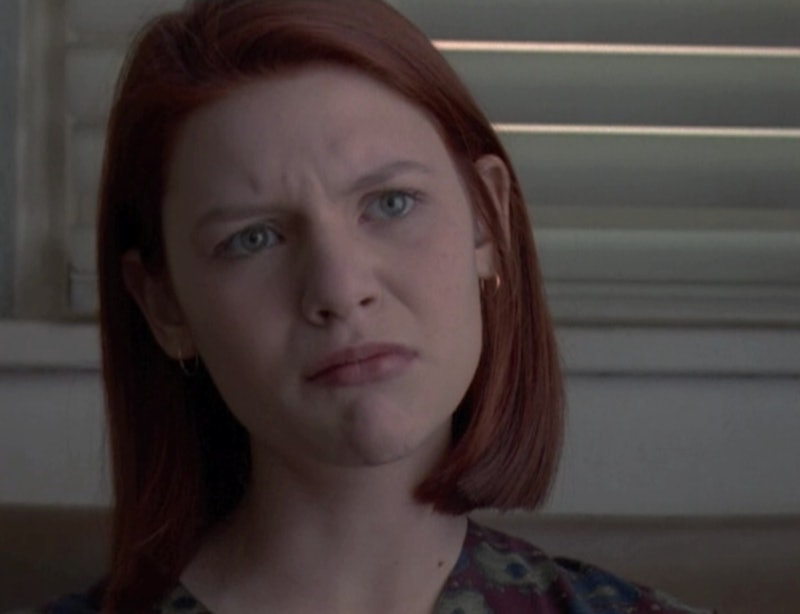 Remember how difficult it was to find people before the Internet? Call someone's landline all you want, but back in the day, if they weren't home, you just weren't going to get a hold of them. Today, with cell phones, text messaging, Facebook, and instant messaging, life couldn't be more different — and, to many, the idea of being out of touch is a nerve-wracking one. It's no wonder that most people feel naked without their cell phones in hand: I mean, I went to grad school where there was no cell phone reception, and I remember my first day on campus thinking, "Wait. What do I do with my hands?" It's weird to us now, the idea of living without technology... but in the '90s, it was common place, and affected every facet of our lives — especially when it came to pop culture. Just think about it for a moment: How many '90s plot lines in movies and television just plain wouldn't make sense now thanks the the introduction of technological advances.

If you think about it, pretty much every romantic comedy plot from before 2002 would probably longer make sense. The inability to be constantly connected, plugged in, or reachable led to missed connections, lost children, break ups, make ups, and some of the best moments in television and movie history.

I'm not saying technology has ruined the entertainment industry or anything, of course — there are plenty of plots that wouldn't have happened without it (hello, The Social Network). However, I am saying that it's pretty hard to watch anything from 20th century and not think, "Oh my God, GET ON YOUR CELL PHONE AND CALL HIM ALREADY!"

That in mind, here is a list of some of the most infamous plots that would have been completely foiled by modern technology. Be it the Internet, a cell phone, Google, or Tinder, there's no way these storylines would have made it in Hollywood today.

Can you imagine if Annie had had Google instead of that weird, antiquated database she used to search for "Sam," "architect," "Chicago"? First of all, she would have found way more than three men who matched that description — "Sam" isn't exactly an uncommon name in a gigantic city like Chicago. Second of all, she would have likely also found a picture of him on his firm's website, which means she would have recognized him in the airport when she first arrives in Seattle, and avoided the whole thinking he was in love with Rita Wilson thing. Problem solved. End of movie!

The only reason Ross sleeps with another woman (besides being heartbroken) is that he is using a PAY PHONE to call Rachel from the bar. Pay phones, guys. Remember those? When he hangs up after hearing Mark in Rachel's apartment, she can't get back in touch with him to explain how she's feeling or that Mark stopped by without her asking because Ross called her from a pay phone, and obviously wasn't waiting around for her to call back. Now, imagine if Ross and Rachel had cell phones? They could have been in touch the entire night and figured their stuff out like modern day couples do nowadays: via text message.

I have four words for you: Angela. Chase. On. Tumblr. You just know her inner monologue would have hone viral on that site in a heartbeat — which would've probably led Jordan Catalano to understand how she felt about him. (Plus, you know Brian Krakow would have reblogged everything she posted.)

If Kathleen and Joe had met on a dating website, they wouldn't have gone so long without knowing that they were each other's competition. They probably would have gotten on Skype after exchanging a few messages and the entire situation would have been non-existent.

If only GPS had been a thing in 1993 — those kids would've never gotten lost on that island inexplicably filled with dinosaurs!

There are so many reasons why the majority of this movie would've never happened today: For one thing, the McAllister parents wouldn't have overslept because their alarm clocks would have been around to wake them up in time for their flight. Secondly, if the McAllister parents did oversleep anyway and forget Kevin in their rush to get to the airport, a cheap international calling plan would have allowed them to keep calling home until Kevin picked up. Thirdly, home surveillance systems accessible from the Internet would have allowed the McAllisters to see what Kevin was up to the entire time he was alone. Most importantly, though: tighter security at airports would have prevented anyone from getting on the plane without Kevin in the first place, because someone would have absolutely noticed in the TSA line.

I still can't believe that Swell gets that hotshot fashion job just by faking her resumé —and as unbelievable that plot was for 1991, it's even more-so in 2015 thanks to sites like Facebook and LinkedIn. One look at Swell's Facebook profile — including her prom pictures and high school selfies — would have tipped off that snooping secretary about their new assistant's age within a matter of days.

The final high school party before everyone goes off to college is hardly the last opportunity for 18-year-old kids to confess their love these days If Preston wanted to confess his love for Amanda today, he could have just tweeted her love poems all freshman year long. (Or, like, he could have just waited until Thanksgiving break when everyone comes home and parties together again anyway.)

Umm, yeah. Caller ID would have put those killers on blast real fast.