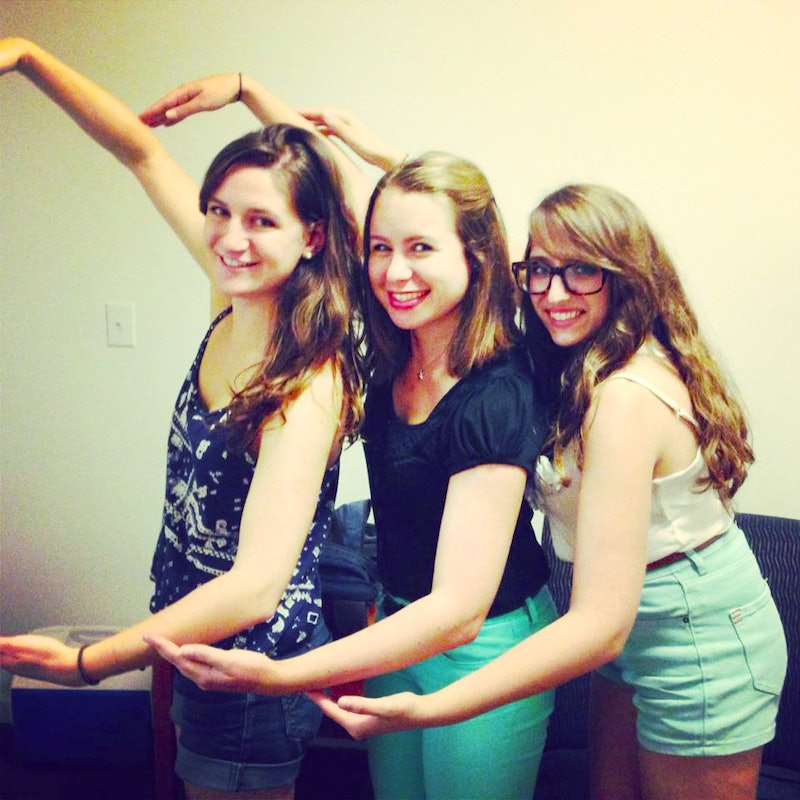 I was in a sorority in college, and for many people who were never involved in Greek Life, sororities may seem like they're shrouded in mystery and secret ritual. One of the most enigmatic things sororities do is formal recruitment, which is the process used to choose new members. Over the course of a few weeks, each potential new member will go to each sorority house and talk to a few sisters for a certain length of time. After every round, there's what's called a "mutual selection process" where the newbies decide which houses they'd like to return to to chat some more, and the houses in turn decide who they would like to invite back to get to know better as well. By the end of the process, the goal is for the potential new member to choose a house she feels she fits in with, and for the sorority to find an awesome pledge class.

Sound confusing, tiring, and scary? It is. You know what's also all three of those things? Applying to jobs. See, I'm not participating in sorority recruitment anymore, but I am looking for a new job. After the last time I went through the ordeal of "submit resume, phone interview, in-person interview, waiting game, rejection," I thought to myself, "Wait, this whole lengthy, seemingly-arbitrary selection process and crushing sense of disappointment feel vaguely familiar...oh, I know, this is all exactly what I went through during sorority recruitment!" I can't say it was an encouraging epiphany, but it was an epiphany nonetheless.

So, even though I haven't landed my dream job (yet), I have been on both sides of the recruitment process and I've learned a lot about getting people to pick you for stuff (and why that can be so hard sometimes). If my struggles can help just one person through their career search, recruitment, or anything else, it will have all been worth it. Sort of. Here's how trying to get into a sorority is a lot like trying to get a job.

1. You talk to a LOT of strangers.

Sorority recruitment is literally centered around freshmen getting paired up with sorority members they've never met and talking to them. Even though the aim is to have a relaxed, fun conversation, it often ends up feeling like an interview: "Where are you from? What's your major? What clubs are you involved in?" Job interviews are literally exactly this, but instead of talking about your major you get to talk about your past work experience. Whoopee. At least there's an upside: you'll get really good at making small talk with strangers, one way or another.

When I got eliminated from sororities, it was a huge blow to my ego. Wondering where I went wrong, since I thought I'd had pretty good conversations, literally kept me up at night. Yeah, I took it really personally. It's hard not to when someone is judging your membership into a group based on how you interacted with them. When I didn't make it in, I felt like I wasn't good enough and there was something wrong with me. Sound familiar, job-seekers?

Once I experienced recruitment from the other side, I realized how impersonal our decisions to cut people actually were. I'm probably not supposed to go into too many details about selection, so I'll just say that a big majority of it's based on those brief interactions you have — remember the small talk? Some people are great at it, others aren't. I guess small talk is kind of like standardized testing in that way. A decision to eliminate someone was generally not personal, since we never really had the time to get to know them too well in the first place. I haven't been #blessed enough to become a hiring manager, but I would imagine job hiring plays out similarly, since the choice to extend an offer or not is made after a pretty brief interview. That might sound the opposite of helpful, but it reminds me that in interviews I should focus on giving the best interview I can — rather than what I think the interviewer wants — since in the end I'll never know why they made their decision.

4. It helps to have connections.

Where I went to school, if you knew people in sororities, you were automatically in a better position than somebody just going in blind. You had somebody to vouch for you, go to bat for you, and just generally spread the word to her sisters about how awesome you are. Which is exactly how it works in the employment search, too. It is, and always will be, about who you know.

Recruitment lasted two weekends — and I mean two full weekends. All day Saturday and Sunday the first week, and all night Friday and Saturday the next. It was long. It was exhausting, emotionally and physically. It felt like it would never end. But somehow, the light at the end of the tunnel appeared, and recruitment was over — until the next year, anyway. I promise you, your job search has to end at some point. Even if you feel like you'll be emailing resumes until you turn 80, that just seems really unlikely.

6. It will all work out eventually.

I know you're sick of hearing it, because I'm sick of hearing it, too. But just trust me on this one. I was so discouraged midway through recruitment, I wanted to punch the next person who told me everything would work itself out and I'd find the house I'd be happy in. But guess what? I did. And if that worked out, I'm sure my job quest (because that's what it is, at this point) will work out too. Just be positive, and have a little faith. And if all else fails, you can come send out resumes at the retirement home with me.