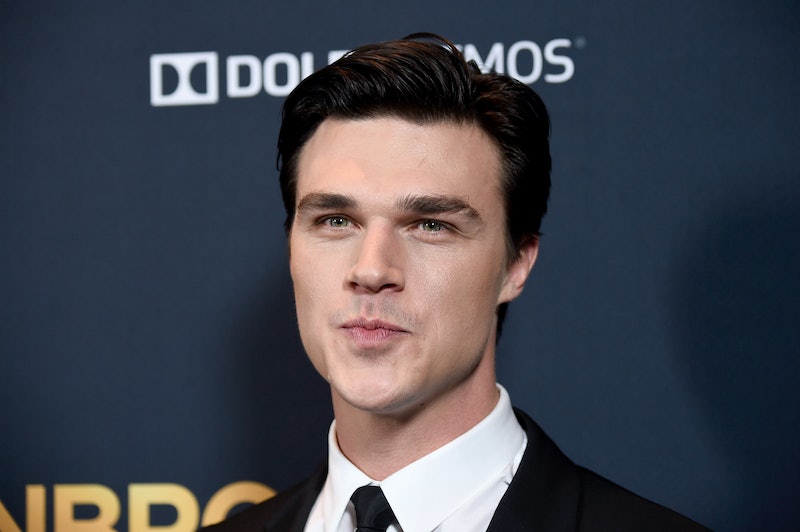 Ever since Ryan Murphy started announcing his cast for the upcoming season of FX's American Horror Story, audiences of the anthology series have been waiting with bated breath for news that Finn Wittrock would be checking into the Hotel. The 30-year-old actor stole the (freak) show last season as fan-favorite character Dandy Mott, a spoiled rich kid turned sadistic serial killer. But, as each casting announcement came and went, Wittrock's name was nowhere to be seen. Lest you go put on a creepy clown mask and get all stabby with despair, it has just been revealed that Wittrock is indeed joining a Ryan Murphy show for the upcoming fall season... but he's just not saying which one.

At the Critics Choice TV Awards this past Sunday, the actor stated that, "I will be back in the Ryan Murphy universe in some capacity. How exactly that’s going to manifest, I still honestly don’t know." Sounds like even Wittrock himself isn't sure which Murphy project he'll land on yet, but he has no dearth of options. Not only will the prolific creator be unveiling a new iteration of AHS, he'll be debuting two brand-spanking-new shows as well: American Crime Story on FX and Scream Queens on FOX.

Which of these series would be the best fit for Wittrock's talents? Let's take a look at all three and ponder just how the actor might fit in to each.

Given that AHS provided the actor with his breakout role, it would be most natural to see Wittrock return to the fold for another go-round. He would be joining an incredible cast, including both returning cast members (Sarah Paulson, Evan Peters, Kathy Bates, Angela Bassett, Chloë Sevigny, Matt Bomer, Wes Bentley) and fresh faces (Lady Gaga, Cheyenne Jackson, Max Greenfield). I'd be all for adding Wittrock to this already stacked deck, provided he actually gets the chance to play a new character.

The nature of AHS as an anthology must be attractive for actors looking to stretch their abilities by playing wildly different roles every year. But, just as often, some AHS mainstays have gotten stuck playing the same archetype each season. (Evan Peters must be sick to death of playing the "monster with a heart of gold" — ghost Tate, zombie Kyle, lobster boy Jimmy.) I'm afraid that if Wittrock signs on for Hotel, we'll just get a variation on his "pretty boy with a dark side" routine. Perhaps another Murphy series would give him more room to explore.

Although the pilot is already in the can, filming for the rest of this horror comedy series doesn't commence until sometime this month, giving Wittrock plenty of time to board the project before its 15 episodes are completed. Since Scream Queens is pulling inspiration from various sources (star Emma Roberts described the show as " Mean Girls meets Friday The 13th "), there are virtually unlimited options for who Wittrock could play. He could be the rebellious new kid at school, a la Heathers' J.D. He could be the boyfriend who turns out to be the killer, a la Scream's Billy Loomis. He could be the queen bee's ex, a la Mean Girls' Aaron Samuels. He could be the chainsaw wielding badass, a la Evil Dead's Ash. (Come to think of it, Wittrock does bear more than a passing resemblance to a young Bruce Campbell. It's all in the chin.)

Murphy's other new show is a spiritual successor to AHS; instead of revolving around fictional scary stories, American Crime Story will focus on a different true-crime case each season. The inaugural year of ACS is about one of the most notorious trials in American history, and thus promises to be a more serious fare than its light-hearted horror cousins. A part here would give Wittrock ample opportunity to show off more of a dramatic side to contrast with the campy villainy of Freak Show. The only problem isn that most of the key players involved in the case are already spoken for, played by an incredible cast including Cuba Gooding, Jr., Sarah Paulson, John Travolta, David Schwimmer, Connie Britton, Selma Blair, and many many more.

So who's left for Wittrock to play? One important player that's still unspoken for is Barry Scheck, director of the Innocence Project. But given that Scheck was almost 50 at the time of Simpson's trial, Wittrock's far too young to play him. How about limousine driver Allan Park? I couldn't find any information on Park's age, but pictures from the trial show a man young enough that Wittrock could portray him believably. The testimony of Park, who drove Simpson the night of the murders, was considered a key component of the prosecution's case and severely damaging to Simpson's alibi. This could be a juicy supporting role for Wittrock to dig his teeth into.