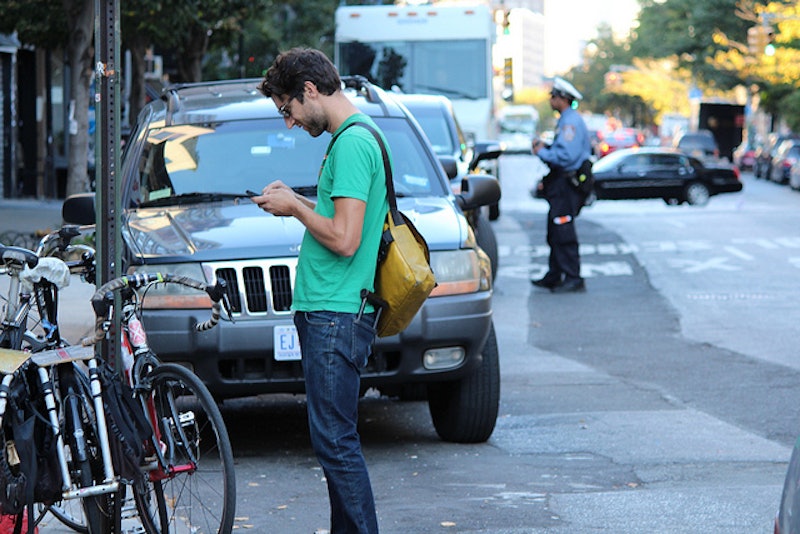 Tinder is arguably the most popular dating app available on the smartphone, which is probably a big reason why there are so many discrepancies with it. The biggest issue, according to what the Internet has to say, is just how vulgar the app’s male users can be — with a focus on the all the creepy things guys say on tinder. The irony being that Tinder was initially sold to audiences as a digital safe haven where men and women can avoid these types of unsavory characters through the app’s matching capability (meaning: you can’t communicate with anyone unless there’s a mutual attraction), but not even that did the trick. Perverted men eventually found their way around this hurdle by pretending to be nice guys who actually want to get to know somebody.

I know these things are easy for me to say, being a guy and all, but let me add that I recently wrote a story about an experiment I began where I logged onto Tinder as my girlfriend, swiped right, and chatted with a bunch of dudes who thought I was her, all to view Tinder from a female point of view and discuss what men are doing wrong. Let me tell you it was very difficult for me not to invite these guys on a date and rip them to shreds for talking to who they believed to be my girlfriend the way they had. In addition to these jackasses, however, were other polite men who actually conversed and seemed genuine. These guys, of course, are what we call grown-ass men — the kind of dude you want to date. So the next time you swipe away on Tinder and match with a man who says something that's been mentioned below, save yourself the trouble and drop him. He's a man-child.

I can honestly admit that I’ve never sent a dick pic. I can probably attribute this to Amy Schumer, who’s publicly voiced women’s distaste for photographed penises. I also figure these photos would be incredibly awkward to pose for. A man’s genitals aren’t exactly photogenic, so there’s no point in going through the trouble of finding the angle where it looks its biggest and best – which, of course tons of guys do.

Looking for an ego-boost, buddy? We all know why a person swipes right­, asking why is just a blatant request for a compliment. The beauty of Tinder is that everybody knows it’s superficial: you judge somebody based on their appearance in a collection of images that were chosen because they look their best. The post-match conversation is what really gets the date. And if he’s already asking for a compliment, that date probably won’t happen. Or it shouldn't.

When I was on my girlfriend’s Tinder, 90 percent of the people I interacted with opened using a pick-up line. Then 50 percent of these people would then apologize for how bad their pick-up line was before I could even respond – so why say it at all? I can only assume they were trying to go with something other than “hey”, and settled on the pick-up line. Poor choice.

You do? That’s weird, because Tinder’s the only reason you’re communicating with the person you shared this with. Disclosing your hate for something you actually enjoy is something hipsters have been doing for decades, so unless you own a craft brewery and purchase patterned socks in every conceivable color, hit the bricks.

The question itself is offensive. People are on Tinder because they’re single, and that's obvious, it’s a dating app. Also, the answer to this question could lead to something you really don’t want to know about, like adultery or divorce from a previous partner. A grown-ass man will ask a question that’s more direct, like: "Are you looking for something casual, or more serious?"

7. “What Other Dating Sites Are You On?”

Asking how many dating sites somebody is on is pretty much asking the person to reveal how desperate they are for a relationship. When the question is asked, the truth probably won’t be revealed, because, like one’s sex number, people are encouraged to alter the truth to reflect what society believes is commendable.

8. “Tell Me About Yourself”

Considering you don’t know each other at all, this guy’s pretty much asking for a biography, and more times than not, will receive a response along the lines of “Well, what do you want to know?” Again, a grown-ass man knows this answer is too broad and will be more direct, asking things like “What do you do for a living?” or “Where did you go to school?”

These kinds of guys are all over Tinder. They will cut to the chase – which is admittedly probably more commendable than a man who fakes a relationship when all he wants to do is get laid. Regardless of how unfortunate that is, these guys are on the app to have sex, and nobody – including you – willt be able to change that.

10. “Tell Me Something About Yourself That Would Make Me Want To Get To Know You Better”

I’m not sure if you’ve ever been asked this as it's such a lengthy and bizarre question, but when I was on my girlfriend’s profile, a guy actually asked this question after conversing for a while. What he doesn’t understand is women have the upper hand on the app; they match a hell of a lot more than guys do, so making it seem like him conversing with you is charity, is a joke.

More like this
TikTok's Voluntary Celibacy Trend Has Sparked A Movement
By Lexi Inks
Here’s What TikTok's "Mascara” Trend Is *Really* About
By El Hunt
30 Sweet Valentine's Day Caption Ideas For Long-Distance Relationships
By Syeda Khaula Saad and Carolyn Steber
50 Valentine’s Day Instagram Captions To Post If You’re Single
By Jessica Booth, Lexi Inks and Carolyn Steber
Get Even More From Bustle — Sign Up For The Newsletter
From hair trends to relationship advice, our daily newsletter has everything you need to sound like a person who’s on TikTok, even if you aren’t.